Lisa Raitt is back from the brink

If Canada's Minister of Transport succeeds on the rail-safety front, her cabinet comeback will be complete 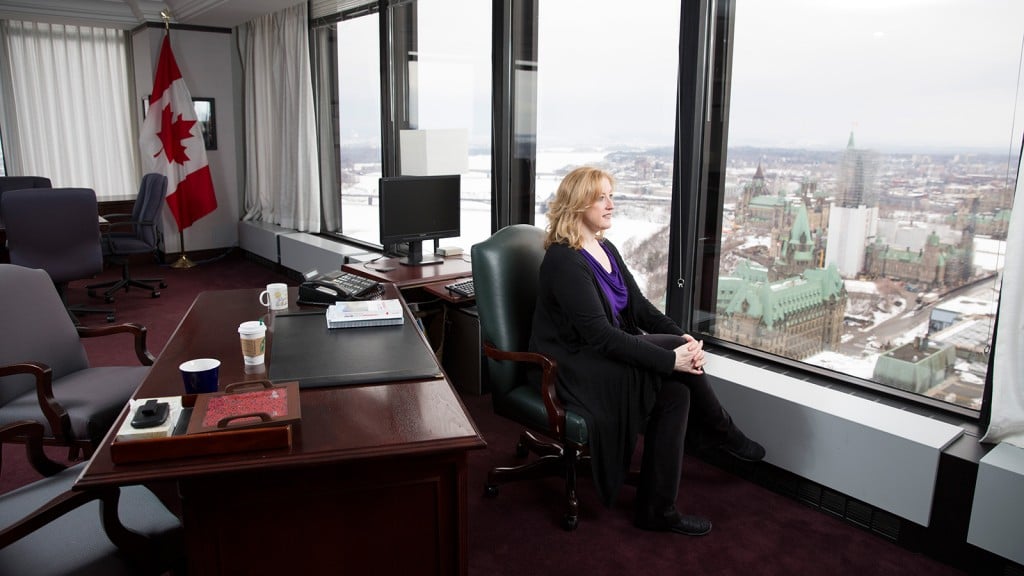 UPDATE: Conservative MP Lisa Raitt announced her bid for the Tory leadership on Nov. 2, 2016. Raitt’s political career is full of twists and turns, but she emerged as one of the Harper era’s most capable ministers. In 2014, Maclean’s Ottawa bureau chief John Geddes profiled the cabinet minister who grew up in Cape Breton and now represents a riding west of Toronto.

On the first weekend of last July, Lisa Raitt was home in Moffat, Ont., contemplating a new job. She had been Stephen Harper’s labour minister for 3½ years, but the Prime Minister had told her that he planned to promote her soon to transport minister in a summer cabinet shuffle. Watching the TV news in her kitchen on July 6, Raitt was confronted by the realization that the transition would be far from routine—in the very early hours of that morning, a runaway freight train hauling crude oil had derailed and exploded in Lac-Mégantic, Que. “I’m realizing there’s a role that I’m going to have to play,” she recalls thinking. “I couldn’t get my head around the devastation.”

The accident killed 47 people and flattened part of the picturesque vacation community. Suddenly, federal regulation of rail safety was a pressing concern. As planned, Harper moved Raitt to the now high-profile Transport portfolio on July 15. She was in Lac-Mégantic two days later. For Raitt, who was raised in a blue-collar, Catholic family in Sydney, N.S., her visit to Lac-Mégantic’s Ste-Agnès church, on a hill that afforded a clear view of the blackened scene of the inferno, has stayed with her. “Inside, it’s all the victims’ families putting up memorials of them smiling and happy,” she says. “And turn 180° the other way, and there’s the disaster staring you in the face.”

Raitt has been under pressure ever since to frame the policy response. One key issue is how quickly to phase out the type of railcar that blew up in the derailment—cylindrical tankers known as DOT-111s—which are widely viewed as unsafe. In an interview with Maclean’s, Raitt revealed that she’s planning to get rid of them more quickly in Canada than it appears the U.S. is likely to move. An American advisory council has proposed a 10-year phase-out period. “Ten years is too long, it’s just way too long,” Raitt says. “I have advice from my officials. They are consulting with industry right now.” Asked how long she’s inclined to give Canada’s rail industry to stop using the old tanker cars, she answers, “Less than five years.”

If Raitt succeeds in moving authoritatively on the rail-safety front, her recovery from a rough start to her cabinet career will appear complete. She was first elected a Tory MP for the fast-growing Halton riding, just west of Toronto, in 2008. Harper put her in cabinet right away as natural resources minister, but as a rookie she soon found herself coping with controversy. A young aide to Raitt misplaced confidential documents and an audio recording, which led to news reports on Raitt being caught on tape referring to a shortage of medical isotopes for cancer treatment as a “sexy” issue. In his 2010 cabinet shuffle, Harper demoted her to labour minister.

Under this Prime Minister, few have recovered from such a setback. But Raitt’s run as labour minister allowed her to establish an image as a resolute, resilient politician in the eyes of many Tories. She moved quickly to introduce back-to-work legislation to end strikes at Canada Post and Air Canada. That drew fire from the likes of Ken Georgetti, president of the Canadian Labour Congress. But for Harper-era Conservatives, who often seem eager to square off against organized labour, that only helped refurbish her reputation. For her part, Raitt says she believes in collective bargaining, but doesn’t think the economy as a whole should suffer when a single company and a union can’t reach a deal.

She relies on her life history to back up her claim to having an ingrained respect for unions. Born in 1968, she grew up in Sydney on Cape Breton Island, raised by her grandparents, who adopted her, as the youngest of seven children in their household. She learned as a teenager that her biological mother was one of the girls she thought of as an older sister. Her grandfather loaded coal on trains and was a prominent union organizer, and later a Sydney alderman. When he died in 1979, Raitt’s grandmother was 58, so the whole family “held their breath,” Raitt recalls, for the two years until she became eligible for badly needed widow’s benefits.

Money was always tight. One of Raitt’s older sisters ran a Dairy Queen, which was a welcome source of part-time and summer jobs. “I hate it when people call it a McJob,” she says. “For those who do it, it’s not a McJob. It’s a means to an end. It’s a place to fill a gap. It’s important experience as well—nothing like giving somebody the wrong Blizzard.” She also remembers how business at the DQ boomed on days when employment insurance, social assistance or seniors’ benefits cheques arrived in the mail. High unemployment was a Cape Breton reality, and Raitt says her conservatism grew out of watching the island pin its hopes on government economic-development plans that never quite panned out. “This is what’s guided me: I witnessed government intervention my entire life and it never worked,” she says. “Forty years of failed policies have created a situation where my entire family has to think about losing their children; no one stays on the island anymore.”

Raitt was among those who left. She earned a science degree at Nova Scotia’s St. Francis Xavier University, then a master’s in chemistry from the University of Guelph in Ontario, and finally a law degree from Toronto’s Osgoode Hall Law School. After working as a lawyer for the Toronto Port Authority, she was named its president and chief executive officer in 2002. In that role, she clashed with Toronto municipal politicians and with the Liberal government in Ottawa, experiences that she says politicized her and led her to run as a Conservative in the 2008 federal election.

Battling bad press early on as natural resources minister proved to be her political trial by fire. “It wasn’t what happened,” she says. “It was the inordinate amount of public attention it got, and press attention. It made me realize, ‘Okay, you’re in a bigger fishbowl now.’ ” She didn’t shy from controversy in Labour, though, cracking down on those high-profile strikes without hesitation. Ken Lewenza, who was president of the Canadian Auto Workers at that time, met often with Raitt, frequently in tense circumstances. Describing her as “very respectful, very accessible,” Lewenza, now retired, says her union roots helped them establish a rapport. Yet he can’t recall her bending on a single issue. “She was open, but she was never, never collaborative to the degree that the union’s input meant a hell of a lot,” he says.

Lewenza does credit her with spearheading the creation of a national standard to help guide Canadian employers and unions on promoting mental health in the workplace. The voluntary code, created by the federal government along with the Mental Health Commission of Canada and the Canadian Standards Association, was announced last year. Lewenza says he would have preferred to see Ottawa impose regulations and boost funding. “She wanted more of an education program, an awareness program, and wasn’t really willing to use the full force of government,” he says. “But she was compassionate about it.” Raitt talked in a speech in 2012 about her own postpartum depression, after the second of her two sons was born in 2004. It added another dimension to a political persona built mostly around flinty toughness. Along with the rail-safety file, Raitt has also been in the news as minister responsible for Canada Post, as the Crown corporation moves to eliminate home mail delivery. On that contentious issue, her message, as usual, is blunt. Traditional to-the-door service is, she declares, just too expensive. Opposition MPs depict her as callous toward seniors who will have to walk to get their mail. “I think just being calm and rational isn’t a coldness,” she says. “It’s respecting people and telling them the truth, instead of a story that pushes off a decision because it’s not popular.” Nobody can accuse Raitt of that. By embracing even the thorniest files, she is well on her way to becoming the most notable top-tier Harper minister to execute a cabinet comeback.