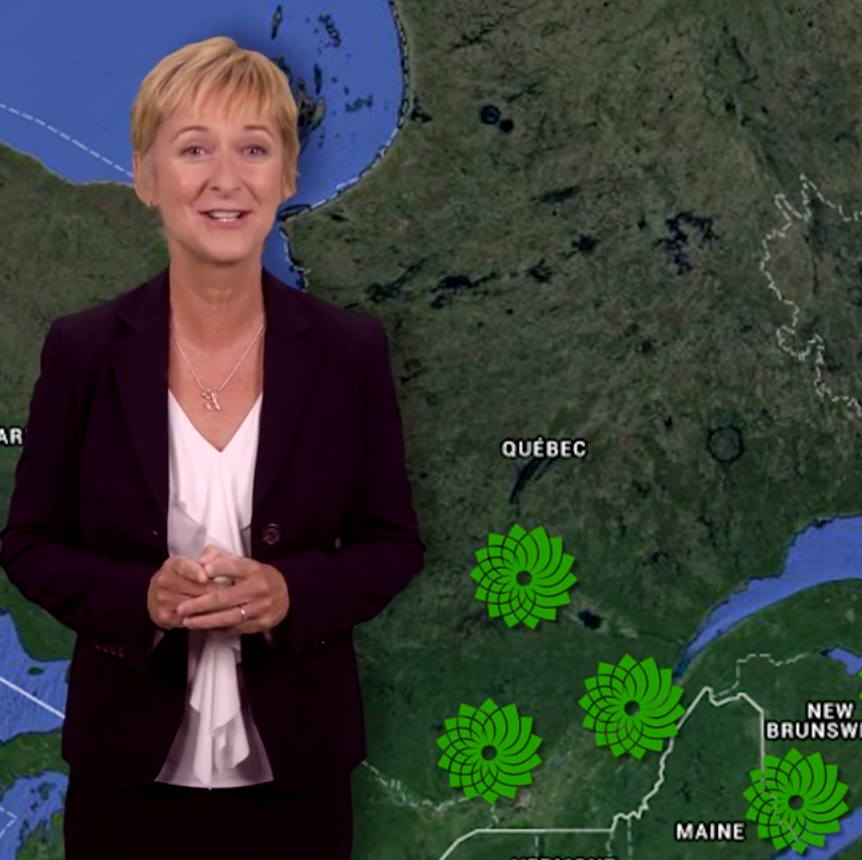 The forecast from former TV meteorologist? Lots of Green.

OTTAWA — The federal Green party has turned to a familiar face who used to make her living in front of the camera — former meteorologist Claire Martin — for its first video advertisement of the election campaign.

She even does a riff on the playful exchanges she used to have with anchor Peter Mansbridge on CBC’s The National.

This time, Martin banters with Peter Bevan-Baker — a Green member of the Prince Edward Island legislature —sitting at the newsdesk.

“Although this is a long-term forecast, it does look like we just might be seeing a Green front moving across Canada — from coast to coast to coast,” she tells viewers.

There’s a more serious element to the ad, too, which concludes with Martin stressing the party is focused on everything from jobs to health care — not just the environment.

The Greens gave Martin — not leader Elizabeth May — the starring role to show potential voters another side of the party.

“Claire’s a natural,” May said in an interview. “I thought this one up as soon as she agreed to run for us.”

May said many people still have no idea Martin is running in North Vancouver or that another recognizable name, Gord Miller, the former Ontario environment commissioner, is vying for a seat in Guelph.

“We do have a challenge in letting Canadians know that we have candidates who will be wonderful members of Parliament.”

By breaking through the usual campaign norm of leader-centred ads, the Green spot reinforces the party’s message that it is doing politics differently, said Jonathan Rose, an associate professor of political studies at Queen’s University in Kingston, Ont.

“As a novelty ad, I can see this being discussed and shared on line,” he said.

But despite Martin’s “professional and persuasive” presence, the more serious portion offers only “vague exhortations” to vote Green, Rose said. “After getting the audience’s attention in the first half, it might have made sense to use that hook to connect the second half.”

The Green ad is the first of several that will roll out online and, the party says, on national and regional television, despite a relatively modest promotional budget.

Viewers have been bombarded with commercials from the governing Conservatives and, to a lesser extent, the NDP and Liberals in recent weeks.

May hopes the Green ad will engage voters and represent a change from what they’ve been seeing.

“Won’t they enjoy a reprieve from ominous voiceovers and bludgeoning the voter with what’s wrong with the other parties?

“There is no way in this world that the Green party will ever run attack ads.”

The gentler approach is also intended to tap into the large pool of voters so indifferent or turned off that they have no intention of casting ballots.

“We want to give Canadians a reason to vote.”

Another key goal is to portray a party that doesn’t bend to the whims of the latest opinion poll, said Green communications director Julian Morelli.

“People will see a modern Green party that still retains its values,” he said. “And I think that’s critically important.”