How Kevin Lynch announced his retirement

Clerk of the Privy Council is leaving in June 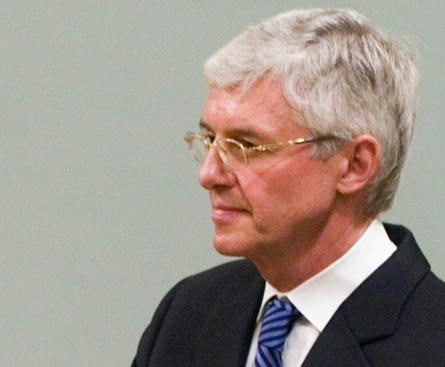 This one comes in two parts. First, here are the talking points Conservative MPs and staffers have been given in case any pesky reporter calls around.

Media inquiries should be referred to Dimitri Soudas in the Prime Ministers Office.

The following information is provided as background:

The Prime Minister thanked Mr. Lynch for his tireless service and dedication to Canada. In recognition of his exceptional public service, Mr. Lynch will be sworn in as a member of the Queens Privy Council for Canada.

Mr. Wouters joined the federal public service in 1982 and is presently Secretary of the Treasury Board. His knowledge and experience will serve him well in the challenging role of Clerk of the Privy Council. Mr. Wouters was born in Edam, Saskatchewan.

The Government will continue to pursue its agenda, to fulfill its campaign commitments and to implement the Economic Action Plan.

I’m told it was an “absolutely routine” meeting until its last minutes. Deputy ministers from each department gave reports on the goings-on in their shops. There was a slide show on the Public Service Employee Survey. Lynch gave no hint that this would be an unusual meeting. Wayne Wouters was there, “sphinx-like, unreadable,” my source says in retrospect — there had been nothing unusual in his appearance or action either.

Then Lynch told his colleagues he had had a conversation with the prime minister, there had “been a decision,” and he wanted them to be the first to know. He was leaving in June. He felt the time was right — perhaps a surprising statement, because there has been much speculation in the civil service that he wanted out, but the rough consensus was that he wouldn’t leave in the middle of an economic crisis — and he assured the deputies they would be “in good hands.” No mention was made of Wouters as the replacement.

How much did politics play a role in this? The early opinions I’ve received are divided. My source on this morning’s meeting says “the PM was always very good about leaving the public service stuff to the public service,” and it’s certainly true that some clerks haven’t lasted as long as Lynch. (Among recent clerks, Paul Tellier was the longevity champ at 7 years, Jocelyne Bourgon second at five years.) Another veteran public-service observer says Wouters is “a nice guy” but that his appointment proves the PMO will be in charge. But as Lynch himself would have argued, theoretically the PMO should be in charge.

I met Lynch once, briefly, before he became Clerk. After the last election I called his office asking for a lunch; he sent a gracious note through his assistant, declining the request. He already had a formidable reputation as a driving force behind the knowledge-economy push of the Chrétien government after 1997. He is said to be hard-driving and tough on subordinates. He doesn’t suffer fools gladly and he has a broad definition of who qualifies as a fool. When he and Harper were in the same room, there would not have been much room for a third ego. I believe his hand has been visible in a few initiatives, largely at Industry, generally without fanfare (more knowledge-economy stuff). Deciphering what he’s been up to in Langevin has been a favourite Ottawa party game for three years. His departure won’t slow that speculation down.