Scott Gilmore: The leader of Canada's newest political party is well placed to at least outperform the Greens. And he might do even better than that. 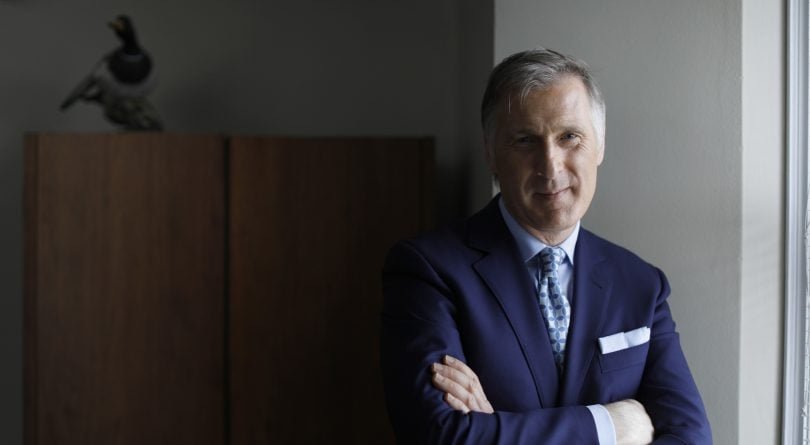 Conservative MP Maxime Bernier in his Confederation Building office in Ottawa April 4, 2017. Bernier is running for the CPC leadership with a Libertarian agenda. (Photograph by Blair Gable)

I did not see that coming. To be fair, I’ve spent most of the last year looking south, watching American politics with the same ghoulish interest I watch Formula One racing. So, I admit that I am not completely up to date with the current state of the Conservative Party of Canada.

That being said, I know enough to recognize it has not been firing on all cylinders—which is normal at this stage, I think. A few bun fights are to be expected when a party moves to the opposition benches after more than a decade in power. And the Conservatives recently lost a leader who had become the very personification of the party. The ensuing race to replace him was a 13-way wrestling match that resulted in a late ballot surprise, elevating a largely untested leader who is still finding his voice.

It’s natural to expect some dissension in the ranks as the party redefines itself in the era of Trump, Trudeau, climate change and #MeToo. Especially when you consider the underlying tensions between the Rebel Media-fed supporters of the party, and the members who believe in a more inclusive and progressive form of conservatism.

Last year, I went across the country to host a series of dinners with people who fall in to the latter category. I had become dismayed with the anti-immigrant rhetoric, the incoherent economics, and the fear-based policies on refugees, jails and weed. What I found were rooms filled with earnest Canadians who wanted small government, but believed in climate change. Or who wanted a strong defence policy, but had a gay daughter. They felt abandoned by a Conservative Party whose ideology had not kept pace with Canadians, and they represented a significant proportion of party members. So, if anyone was going to leave Andrew Scheer’s team, I would have expected it would be one of the MPs from that side of the party.

I did not expect it would be Maxime Bernier complaining that the party is being too soft on refugees and multiculturalism. But, that is exactly what happened this afternoon. Mad Max, as his fans like to call him, called a press conference, condemned Scheer for stifling debate, and resigned from the party. And while it was not quite a formal announcement, he made it clear that he intends to start a new political party, one that reflects a more coherently conservative worldview – or at least, his conservative worldview.

I suspect Bernier’s departure will be greeted by jeers from the Conservative benches, hoots from the Liberal benches, and dramatic eye rolls from the press gallery above—pretty close to the response I got when I went across the country last year asking, “Do we need a new conservative party?”

Which, to be honest, is a fair reaction to both Bernier’s gambit now, and my little tour then. Starting a new party is necessarily destructive in the short term and will do nothing but hurt the Tories as they go into another election. And, the likelihood of the venture succeeding is low—not quite a fool’s errand, but somewhere near the quixotic end of the probability scale. And, it’s easy to roll your eyes at political rabble-rousers in this country because they are so rarely sincere, self-aware or successful.

But, I will be paying close attention to what Mad Max does now. Not because I share his values—although I agree with every word he says when he attacks our state-protected dairy cartel—but because he may very well succeed.

First, there is no coherence in the current party platform. Their positions are often at odds with conservative ideology and frequently seem to be ad hoc reactions to whatever the Liberals are doing. And while I find myself on the opposite side as Bernier in this schism, there is a real split between the so-called “left and right” sides of the party. As demonstrated by his strong showing in the leadership race, many party members (possibly even the majority) want a party that makes sense to them, that matches Bernier’s vision.

Second, this has worked before, recently. The very party members who today claim a new party can’t work were once members of a new party that did. Preston Manning was also mocked, but he persisted and created a movement that eventually (through elections and mergers) became the most powerful and popular political machine in the country.

Third, consider the Green Party. They are a significant voice in Canada. Their leader gets a great deal of airtime and has a disproportionate impact on the political conversation inside and outside of the House of Commons. I predict that Maxime Bernier’s new party will be larger than the Greens heading into the next election. Last year, the Greens raised $2.5 million. That same year, Maxime Bernier raised $2.5 million. The Green party received donations from 14,773 party members. Maxime Bernier received leadership votes from 60,000 party members. The Green party has one seat in the House of Commons. Maxime Bernier has one seat.

The new leader of Canada’s newest political party is well placed to at least outperform the Green Party in the upcoming election. Will voters buy what Bernier’s selling? I think his conservative views aren’t much more coherent than Scheer’s—it’s hard to square libertarian ideology with concerns about whether too many people are choosing to wear hijabs. But clearly many Canadians support Bernier’s ideas, such as they are. In fact, I would bet more voters support his ideas than those of the Green Party.

Bernier was the Conservative Party’s best fundraiser. He has his own nationwide campaign machine he can mobilize. And he has a gift for grabbing the spotlight. So don’t roll your eyes at Max. Not yet, at least. He may be going places.