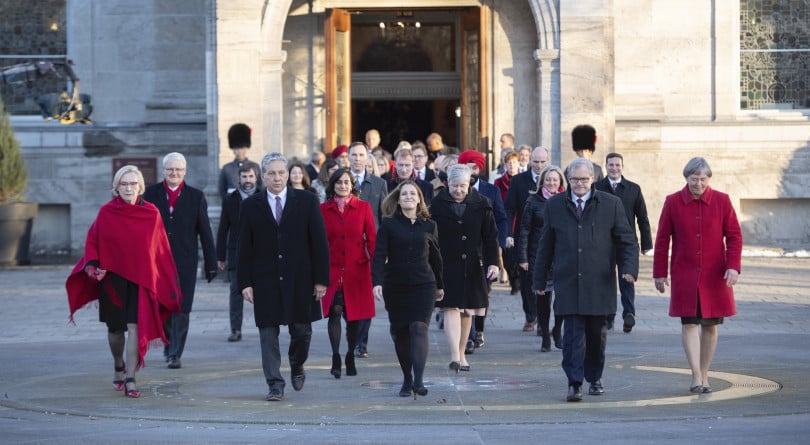 Members of the federal cabinet walk through the forecourt at Rideau Hall after a swearing in ceremony in Ottawa, on Wednesday, Nov. 20, 2019. (Justin Tang/CP)

After a nasty election that exposed deep regional fractures and reduced the Liberals to a minority government, Justin Trudeau unveiled his new cabinet Wednesday with big name changes and more than a few surprises. There’s a lot of ground to cover so we’ll jump right into Maclean’s analysis of cabinet day.

Trudeau 2.0 — Je ne regrette rien: The PM has created a multiply redundant federal cabinet where no one will have enough power to influence anything, writes Paul Wells. How little things have changed:

A multiply redundant federal cabinet will quickly become a pretext for central control even if that wasn’t the point of building it that way, because none of the title-holders holds enough of the elephant to discern its shape, let alone influence its path. A lot of European countries have a minister of finance, who writes budgets, and a minister of the economy, who here would once have been called the minister of industry. But Justin Trudeau has always preferred a multiplicity of inputs without worrying too much about results, and this does not seem to have much changed.

What Chrystia Freeland’s real role will be: Trudeau’s new deputy PM is about getting a job done behind closed doors, not winning over voters—least of all in Alberta, writes John Geddes:

By making her his intergovernmental affairs minister today, and especially by naming her deputy prime minister, Trudeau is signalling his hope that Freeland can do something about Western alienation. The fact that she grew up in Alberta—between her mother’s Ukrainian socialist co-op in Edmonton and her father’s Peace River farm—is supposed to matter.

Jonathan Wilkinson and a stick of dynamite: The new minister of environment and climate change has a very hard job—and an intriguing background well suited to it, writes Shannon Proudfoot.

Why Trudeau’s cabinet is still all blurry on the western front: The prime minister wisely avoided a stunt move like appointing an unelected Albertan, writes Jason Markusoff. What’s more, Trudeau spoke of the energy industry with some overdue respect.

For the record — Trudeau on his new cabinet and the disgruntled West: He touts his working relationship with Freeland, his new natural resources minister, and innovation in Alberta and Saskatchewan.

Justin Trudeau didn’t beat his 2015 record for lingering hugs: The PM’s longest hug time went down by half between 2015 and 2019. Our hug-o-meter tells you exactly how long each hug was the cabinet swearing-in ceremony.

Lastly, here’s a roundup of what pundits elsewhere are saying about Trudeau’s choices:

Sound off: Help us better understand what you’d like from the Maclean’s Politics Insider newsletter. This short survey will only take a few minutes to complete. We really appreciate the feedback.