Kady O'Malley was on the panel circuit at the Manning Centre conference this morning. Here's what she saw and heard. 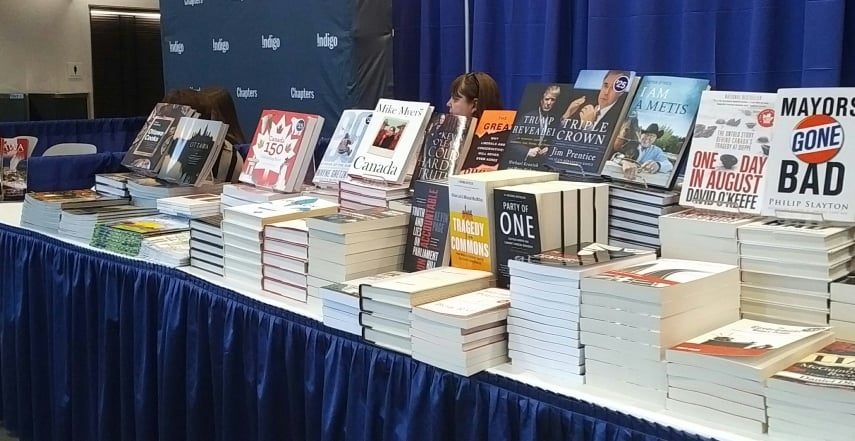 I’m trying something a little bit different this morning: I’m going to circulate through all three panel sessions, but I’m writing up my thoughts in real time, just so I don’t promptly forget any and all insights before I’m able to post a full morning recap.

With that programming note, out of the way, my first stop is the main hall, where the topic du jour is… “Censorship on campus,” featuring recently notorious professor Jordan Peterson, who has been involved in an ongoing dispute over his right to use whatever pronouns he chooses, even over the objections of a target thereof.

The other panelists include Gad Saad (up now and entertaining the crowd by reading letters from students and faculty who have allegedly experienced precisely such censorship) and John Carpay.

This is also a perfect example of what my erstwhile Postmedia colleague Chris Selley observed in his first-day account of the conference: a total absence of opposing views amongst the panelists. Which is great if the goal is to reaffirm the positions held by an ostensible majority of audience members, but not actually all that dynamic.

Honestly, you could get the gist reading the comment thread on any news story on alleged political correctness purportedly gone wild. Down with trigger warnings!

The crowd, for the record, seems appreciative, if a bit muted—which is likely more the consequence of the relatively early hour than any deficiency on the part of the presenters.

I’ve now relocated to a side panel on “Dealing with Deficits,” which is—somewhat sparsely populated, but actually seems to be producing some genuine debate—not over whether deficits need to be dealt with, obviously, but how to communicate that urgency to the public. (Among the panelists: former finance minister Joe Oliver, who is dutifully scribbling down notes as he listens to Toronto Sun editor Adrienne Batra lament how “no one ever says no,” as far as spending. (She’s focusing on the Toronto city budget, but makes it clear that her frustration applies to all levels of government.)

Unfortunately, poor time management means I won’t be able to stay for the question-and-answer portion, as I need to pop my head in one more session to make it a perfect circuit.

Alright, so I’ve now wandered into the session on digital “winners and losers” on the U.S. election trail, which is a rare one-man show: that man is Vincent Harris, a Republican strategist at large who also worked for Rand Paul. I am somewhat at a disadvantage here, what with having missed most of his presentation, but so far, it seems like Trump has been designated a “winner” and Hillary Clinton a “loser.” So, kind of like the overall election.

Another characteristic of this year’s conference: very little time for questions from the audience. Which is too bad, because that tends to be the most interesting part of any segment.

I’ve come full circle and am now back on the media risers in the main hall, where the conversation—which has included questions from the moderator, but, as far as I can tell, no audience participation—is just wrapping up.

To their credit, it does seem like the discussion has gone beyond what is basically an apple-pie issue for this crowd: namely, freedom of speech is vital, on and off campus.

Interestingly, Carpay makes it clear that his view on enforced freedom of speech only applies to universities that get public funding, and not, say, Trinity Western University.

And with that, it’s break time. See you on the other side! (Of the break, that is. Not some sort of fancy metaphorical divide.)