Manning Manifests: CBC a prime target as conference winds down

The annual Manning Conference wraps up with a lively discussion on whether to sell the CBC outright, or just scale back its journalistic operations. 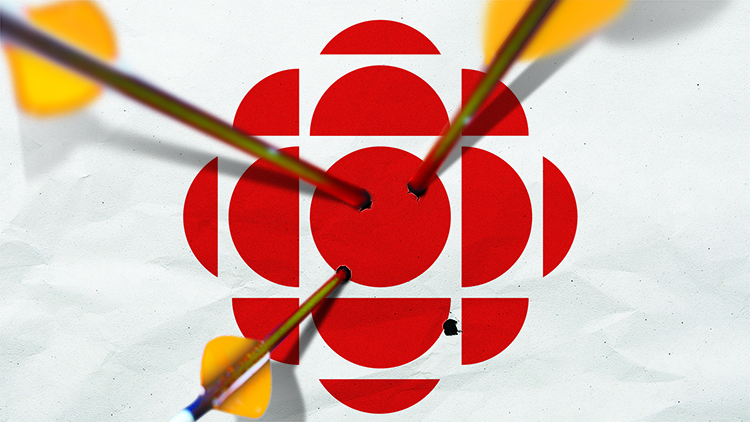 Alright, we’re back in the main salon for the second-last session of the day—and the only show in town in this particular timeslot—in which two journalists and an academic will debate whether it’s “time to unplug” Canada’s national broadcaster, starting with Brian Lilley, CFRA radio host, Rebel Media co-founder and avowed adversary of the continued existence of the CBC.

His position: it should be “sold off,” a view that, not surprisingly, earns a warm round of applause from the crowd: this is not a group that needs to be convinced to put the broadcaster on the auction block, but that’s not going to stop Lilley from giving his full spiel.

Fun fact: During my previous incarnation as—yes, a CBC journalist, I used to come to the Manning Conference every year, and unfailingly, at least one speaker would call for the Mothercorps to be dismantled, at which point all (or at least a few dozen) eyes would turn to me, who would be busily doing my best impression of a disinterested party.

Anyway, Lilley takes special aim at the newly launched CBC opinion section before wrapping up and ceding the floor to iPolitics publisher James Baxter, who will outline the logic behind his argument that CBC has become an “uberpredator” in the modern environment.

He doesn’t think it’s quite time to “pull the plug,” he notes, but to “pull hard on the reins,” starting with a long overdue mandate review.

Baxter says the Canadian right should want a “robust CBC,” but not one centralized in Toronto—there could be seven or eight smaller, more spread out CBCs. Like a spider plant!

He also offers the ProPublica model: CBC could work with other media outlets on specific projects, rather than competing against them.

This is probably as good a time as any to disclose that I’m not just a former CBC journalist but still make fairly regular appearances on CBC News Network as a panelist, and as of this week, I’m also going to be writing for iPolitics. Which, if you think about it, sort of balance each other out, as far as interests.

Finally, the moderator—Summa Strategies strategist Michele Austin—touts the last presenter as evidence of how big the Manning Conference tent can be: it’s Dwayne Winseck from the Carleton School of Journalism, who gives an emphatic “no” on the question of unplugging—or at least de-funding—it; he actually thinks it might need more support.

Winseck, it becomes instantly clear, is deeply concerned about media concentration in general, which is why he wants to ensure CBC doesn’t diminish in influence as the media environment expands.

“Right now, CBC is a pygmy,” Winseck concludes, and not a “colossus,” particularly when compared to the wireless companies.

It’s almost like Winseck’s actual area of interest revolves around the links between wireless and broadcast ownership rights, and not actually public broadcasting, but he was the only one willing to come on the panel at short to no notice to argue the pro-CBC side.

Trust in the CBC, he suggests, is actually “quite high.” Probably not in this room, though.

In any case, this will be exciting! At least, it could be exciting if our panelists are allowed to interact with each other.

Winseck’s final point: When it comes to paying for news, the choice is becoming stark: Media can either be funded by rich patrons, dictatorship and propaganda pushers or the public purse, and he knows what he’d prefer.

Well, when you put it that way…

And now, discussion! Austin invites the panelists to comment on the “fake news” phenomenon. (Side note: Every time the phrase is used, there’s this undercurrent snickering through the room, which I can’t quite decipher.)

Anyway, Lilley wonders where the CBC’s hard-hitting exposes on Justin Trudeau are—every other outlet has, even the “Toronto Red Star.”

Baxter suggests CBC should concentrate on the journalism that has to be done, and Winseck doesn’t seem to think “fake news” is a real problem at all. (He also suggests CBC has been “the real innovator” on digital and technological advances, putting its content out on various mobile platforms long before other outlets.)

Austin wonders if an argument can be made that opinion pieces—like the new online section—does, in fact, stray outside the CBC mandate; Baxter suggests that is one of the questions confronting the Canadian Heritage committee, but provides a few reasons as to why he doesn’t think it does.

Nor, for the record, does Lilley, who also dismisses Winseck’s suggestion that Canada consider a more Scandinavian-style broadcast funding model.

“They should be reined in,” he agrees, although he’d prefer to see it sold off entirely, and he isn’t suggesting they should get off the Internet entirely.

Paywalls for private media outlets, he points out, will never succeed in Canada as long as CBC puts all its content—including the full Canadian Press feed—online for free. (Still more approving applause from the room.)

It likely won’t surprise readers that Lilley absolutely agrees with the assertion that the CBC and its journalists are biased against C/conservatives, although he points out that, in his view, all journalists lean left.

Baxter agrees that CBC is too urbanized, which is why he’d like to see regional CBCs with limited interaction. (He doesn’t seem quite as convinced on the bias point, although agrees that there is a perception that journalists tend to land somewhere in the centre-left part of the spectrum.)

Winseck, meanwhile, suggests that journalists have a “professionalist” bias, and exist within a context.

And that, it turns out, is it for this panel. Next up: Yet another panel on digital engagement, featuring representatives from Twitter, Nationbuilder and Vincent Harris, who you might recall from that panel on the American election.

The topic for today’s session, by the way, is “Taking the digital lead in politics”—yes, there’s that “take the lead” theme once again—and the panelists are unanimous in agreeing that authenticity is key, whether it comes in the form of backstage videos or all-caps tweets from a certain presidential candidate. (Bernie Sanders also gets authenticity points.)

Twitter Canada head of news Jennifer Hollett has a particularly interesting take on that: She’s not only a former journalist, but she also ran for the New Democrats in the last federal election, so she knows all sides of the messaging game.

A confession: I think my brain might have hit the saturation point on political communications in a digital world—and possibly even politics and digits, period.

I’ve been wandering the halls outside the main hall, chatting with the growing throng of attendees who have abandoned the formal programme in favour of, well, wandering the halls and chatting with each other. Which is totally understandable and not at all a slight at the conference organizers: sometimes, one just has one’s fill of active listening in a symposium setting.

(Speaking of which, the social media panelists are now discussing memes and clever hashtags and dealing with Twitter faux pas. Don’t bother even trying to delete it, Hollett says—someone will have already screenshotted it, so you have to “own it.”)

Now, an amazing story from Harris, though: He was the one who accidentally tweeted, from the account of Dan Patrick, who was then running to become lieutenant governor of Texas and was an outspoken supporter of “traditional marriage,” that “MARRIAGE = ONE MAN AND ONE MAN.”

The same tweet, Harris recalls, continued: “Enough of those activist judges. FAVORITE if you agree. I know the silent majority out there is with us!”

Not surprisingly, it was promptly retweeted by thousands of amused/bemused Twitterversians, and they eventually blamed it on a fictitious intern, going so far as to subsequently tweet an open call for applications to replace said intern.

After a panel-wide round of horrified laughter—almost certainly of the there-but-for-the grace variety—Hollett points out that, actually, Harris handled it as well as he possibly could, under the circumstances.

Okay, that was actually worth sticking around for the last few minutes of the conference.

It also seems like the ideal place to wrap up my coverage, although I may have a few final thoughts to share in a later post. Thanks to all who tuned in—and thanks to Maclean’s for giving me the opportunity to revisit my old stomping grounds!