Manning Manifests: Who wants to talk media bias? Pretty much everyone.

Kady O'Malley shares her observations from the second round of Saturday's panel sessions at the Manning Conference. 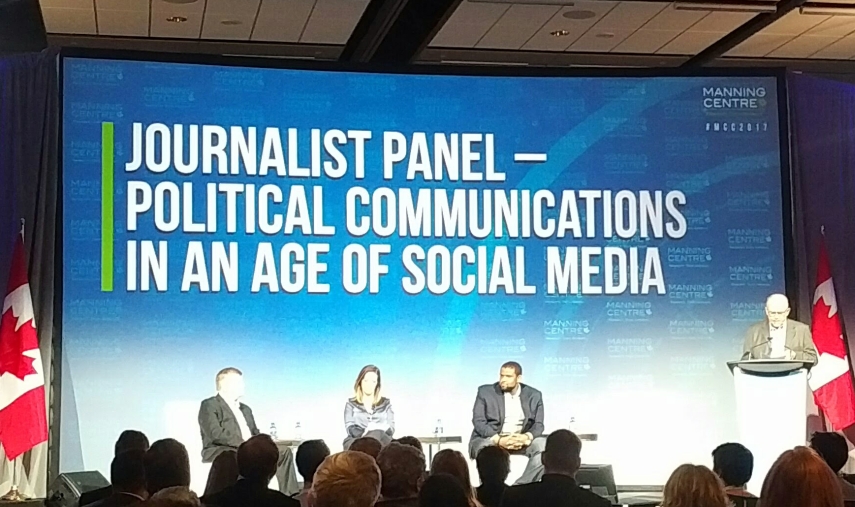 I’m back in the main salon for the annual journalists’ panel—which I’ve even been on in past years—where I have finally found out why there are no questions from the floor: attendees are encouraged to submit queries through the app, rather than line up at a mic like olden times. (I have to say I sort of prefer the latter, but I’m a known curmudgeon)

The real action during this block, however, is expected to be in the panel to which I’ve now migrated: the “carbon pricing debate,” which includes panelists that hold directly opposing views! Well, one, at least: Stephen Harper’s one-time policy director Mark Cameron, who is now a consultant specializing in green pricing, and is currently at the lectern, expounding on what he is trying to persuade the room are the small-c conservative bona fides of a “revenue neutral carbon tax.”

Also on stage is former Conservative MP John Williamson. Oh, and so far both speakers—Cameron and now Michael Binnion have formally stated their believe that climate change is real.

Binnion, it turns out, used to support a carbon tax, but his experience in Quebec has changed his position, which seems to have involved his growing understanding of “carbon leakage.”

Alright, I’ve circled back to the journalists’ panel—despite the lure of a knock-down drag-out fight over carbon pricing, I’m just too curious about what questions the audience might have for the much-maligned mainstream media.

So far—and I don’t know if they’ve shifted to the submitted Q&A segment just yet—most of the questions seem to be about the future of *politics*, period: What’s going to happen in Alberta? Is there any universe in which the Ontario Liberals can hang on? And what about city politics?

Which are all fine topics, don’t get me wrong: I was just expecting more debate over the alleged small-l liberal bias in the media.

(There is also a tiny child whooping quietly but determinedly at the back of the room. Good job bringing down the median age in the room, tiny child!)

Well, this is unexpected: the moderator, Paul Brunner, is opining that the fiscal misery plaguing our industry has mostly affected right-leaning outlets like, in his view, the National Post, the Sun chain and “even Maclean’s.”

When Buzzfeed Canada editor Elamin Abdelmahmoud wonders why, as yet, we haven’t seen a c-conservative-leaning Politico or Buzzfeed in Canada, a cry comes from the back of the room: “The Rebel!”

The source: Rebel correspondent Faith Goldy, who seems more than willing to join the discussion; instead, they—she and Abdelmahmoud—agree to continue the conversation off stage. (Not in a “why don’t we take this outside?” sense, but just in the interest of maintaining control over the session.)

There is general agreement that it’s a good idea not to restrict oneself to putting out one’s message exclusively via news and media outlets run by those with politically views that parallel your own: there is, Tom Clark suggests, little use in yelling into an echo chamber.

A criticism that could be made—or at least raised as worthy of consideration—about the programme for this very conference, too.

Clark is also skeptical that Canada has the same strain of sharply negative populism that produces the sort of mistrust of media that we’re seeing in the U.S. right now—the prime minister isn’t going to start restricting his communications to a select group of media outlets. (Although he acknowledges that all prime ministers have preferences.)

Another moment of liveliness: Abdelmahmoud challenges Brunner’s assertion that fake news is just a matter of perspective. It isn’t, he points out: it’s information put forward as news that is simply not true.

Clark follows up with a pretty good explanation of the difference between “Citizen Journalism” and the more conventional variety: purveyors of the first generally have a day job, and there’s no real accountability if they get it wrong, which isn’t the case with professional media organizations.

Brunner maintains that all reporters come to a story with a “personal bias,” which he bases on his experience with the Alberta Report.

“You weren’t doing reporting, you were doing opinion,” Clark reminds him. Not that there’s anything wrong with opinion, but he wasn’t covering the fire down the street.

Gosh, I’m glad I came back for this discussion—and for the first time this weekend, I’m genuinely sorry to see a session come to an end. Although I’m also hungry, so the lunch break is not unwelcome.