Maclean's is your destination for the 2015 election. Start with our in-depth primers on the big issues, including marijuana

If there is one file on which Justin Trudeau has definitively put his stamp as Liberal leader, it’s marijuana policy. Back in 2013, Trudeau surprised many by speaking out in favour of legalization and regulation, then admitted he “took a puff” on a joint being passed around at a dinner party at his Montreal home—after he was elected an MP in 2008. Ever since, Tories have taken aim at him over the stance. Pro-legalization advocates say criminalizing pot clogs prisons and feeds organized crime. Defenders of the status quo argue that legalization would only give young people, in particular, easier access to dangerous drugs.

Marijuana policy is powerfully polarizing, yet also less consequential than the pocketbook issues that are typically expected to drive votes. Its impact turns on Trudeau’s pro-legalization position. The Liberal leader hopes the issue will attract younger voters who appreciate bold policy. Tories will portray Trudeau’s stance as proof that his priorities are wrong and naive. The pot debate may have significant real-life consequences, but the symbolism is potent: old vs. new, experience vs. innovation, tough vs. soft.

NDP:  The party has crafted a position between its main rivals. The party’s policy calls for decriminalization, not full legalization: “decriminalizing marijuana possession with the goal of removing its production and distribution from the control of organized crime.” The NDP has long hinted at decriminalization, but both the late Jack Layton and current Leader Thomas Mulcair have been criticized for a lack of clarity on the issue.

Liberals:  They want to legalize marijuana. The party features Trudeau and Toronto MP Adam Vaughan in a video that breaks down the party position: Legalization and regulation would make it harder for kids to access pot; the status quo enriches organized crime; and current laws lock up too many “petty” criminals. The Liberals are hoping the pledge reinforces what Trudeau claims is a so-called new, more inclusive approach to politics.

Green:  The party plans to confront complex social and legal issues with an independent law-reform commission that would produce balanced public reports on key issues. The party points to doctor-assisted death, sex-work laws and marijuana legalization as examples of the commission’s prospective files. Green Leader Elizabeth May has publicly supported the legalization and regulation of marijuana. 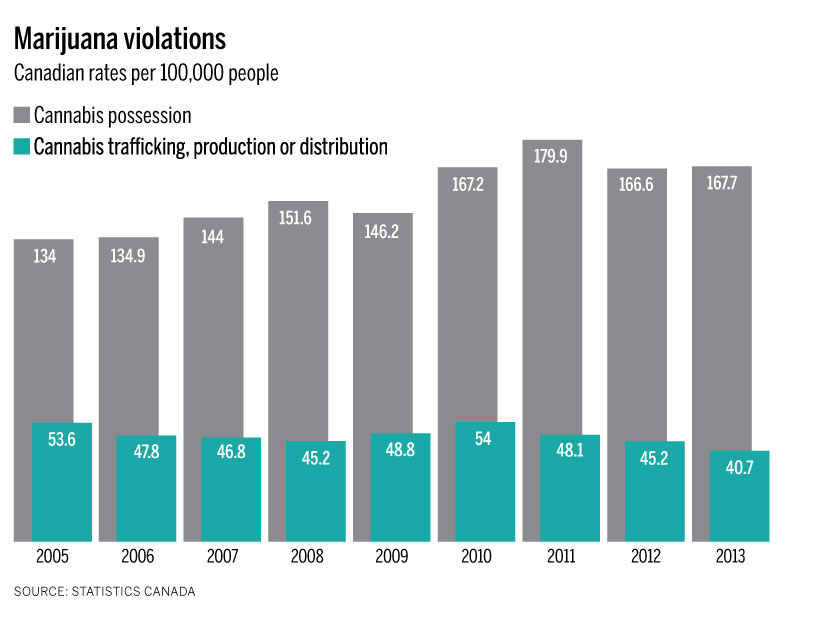 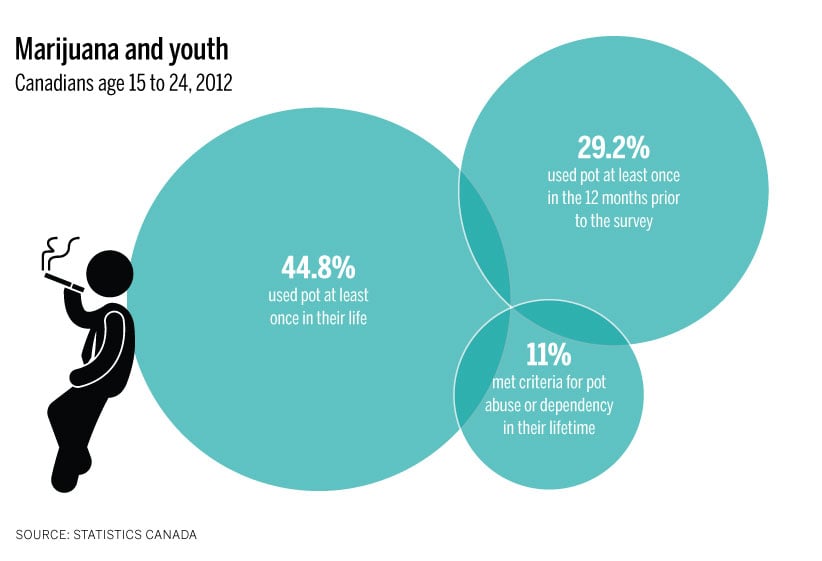 Sharing a small amount of marijuana with a friend or passing around a joint at a party makes you a drug trafficker. There is also a misconception that people are not charge or prosecuted for possession marijuana; they are – at an ever increasing rate. While many international jurisdictions have legalized or decriminalized marijuana, in Canada, during the life of the Conservative government, arrests for possession of marijuana have increased by 28%. The criminalization of marijuana has obvious – and not insignificant – financial costs. The criminalization of marijuana can also destroys lives; every year people are killed because marijuana is illegal, but even the imposition of a criminal record negatively impacts employment, travel, and housing. These impacts are felt more acutely by minority and individuals who are already socially and economically disadvantaged.
—Michael Spratt, criminal defence lawyer

We are with marijuana where we were in 1950 with tobacco research. The public is exposed to pressures from an ambitious emerging industry whose proponents have repeatedly shown themselves willing to deny solid science in their pursuit of profit and expansion. The result of the campaign to normalize marijuana in Canada is a public that is poorly informed about the inherent risks of harm linked with marijuana use. UNICEF reports that Canada has the highest rate of marijuana use by youth in the industrialized world. We clearly have a serious problem that warrants serious discussion.
—Pamela McColl, SAM (Smart Approaches to Marijuana) Canada