Paul Wells: The newly named Governor General has been a pillar of many Canadian communities and now will be again of another. She's needed and ready. 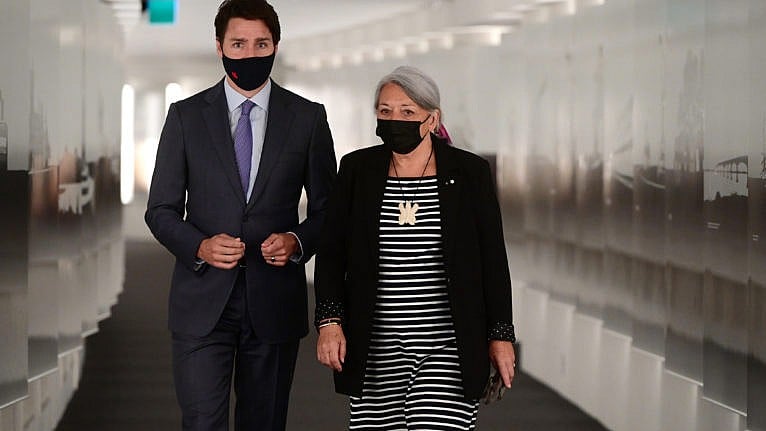 Trudeau and Simon arrive for an announcement at the Canadian Museum of History in Gatineau, Que., on July 6, 2021 (Sean Kilpatrick/CP)

Reading from notes during a brief news conference Tuesday morning at the Canadian Museum of History—which is good! Caution is good!—Mary Simon said she hadn’t discussed a possible election with the Prime Minister.

This is easy enough to believe. A governor general’s role is not to help a Prime Minister win an election. It’s not to discuss strategy with him. It’s not even to have a preference among the various people who might be Prime Minister after an election. It’s simply to be in place during an election, to be on the job. To be there when the current PM asks her to dissolve Parliament and still there after an election when somebody—same guy, another leader, it depends on events—proposes to meet Parliament and test its confidence.

Stripped of ceremony and style, Mary Simon’s job now is to be there. And there she was. So this should work out fine.

She will, whatever else happens, be a historic governor general, because she is the first Indigenous governor general. The concept has been tested in other countries—New Zealand learned only six weeks ago its next governor general will be Maori—and at the provincial level in Canada, where lieutenant governors of Alberta, British Columbia, Saskatchewan, Ontario and New Brunswick have been members of First Nations and a lieutenant governor of Manitoba has been Métis. Some people argued, during the five-month interval between Julie Payette’s resignation and Simon’s selection, that the nature of the Crown-First Nations relationship foreclosed (or, on the other hand, that it required) the possibility that the next governor general be from a First Nation. I’ve heard it argued that the Crown-Inuit relationship is different. Anyway, as we just saw, there is lots of approximate precedent.

Of specific precedent, less so. Everyone is their own story. Mary Simon’s has already had many chapters. Child of Kangiqsuallujuaq in northern Quebec, university chancellor, former Canadian ambassador for circumpolar affairs, and then ambassador to Denmark, where she was replaced by Alfonso Gagliano—spare a thought for the confused diplomatic-circuit population of Copenhagen, circa 2002. Her husband is Whit Fraser, like her a former broadcaster. She’s softspoken, methodical. A refreshing change of pace, perhaps, from the last GG.

Surely somebody in the PMO spent at least three of the last five months worrying that Simon doesn’t speak French. She promises to learn. You know the old proverb: the best time to plant a tree was 20 years ago, the second-best time is now, the third-best time is when you’re 74. I don’t know how vexed to be about a GG who’s bilingual but in only one of the generally board-certified lingua. Some people, especially in Quebec, will certainly be vexed. If it’s any comfort, I suspect Quebec’s problems with the Crown began before Tuesday and will long outlive Mary Simon’s tenure at Rideau Hall. Some outside Quebec saw the appointment of a GG who doesn’t (yet?) speak French as some kind of liberation. And it’s true, JJ, this was the one thing keeping you out of the running until now.

She should be fine. We tend to forget this in Canada, where the tendency to make spectacular choices has been a recent temptation, but part of the point of the Crown is that the institution should be bigger than the individual. This point has been made radiantly clear for decades by Elizabeth Windsor, who fell into the role by pure genetic accident and who was, without difficulty, Margaret Thatcher’s Queen and Tony Blair’s, Harold Wilson’s as well as Boris Johnson’s. They could be quirky. She needn’t be. It does no good for kings to enfeoff themselves to popularity, as Shakespeare’s Henry IV reminded us. Just show up. Mary Simon has been a pillar of many Canadian communities and now will be again of another. She’s needed and ready.

Expect Simon’s formal installation to take place before mid-August, the likeliest kickoff date for an election nobody needs but one man wants. The omens and portents are many. The Prime Minister is newly clean-shaven, as he was the last time he campaigned for re-election. His polling advantage is impressive. Members of his campaign staff who had government jobs are already, I’m told, working on their campaign tasks instead. The pieces are falling into place for the next chapter in the many, many adventures of Justin Trudeau.