Maxime Bernier was oddly flat in the final Tory showcase

But Bernier's likely nearest rival, Andrew Scheer, rose to the occasion in front of the Tory crowd 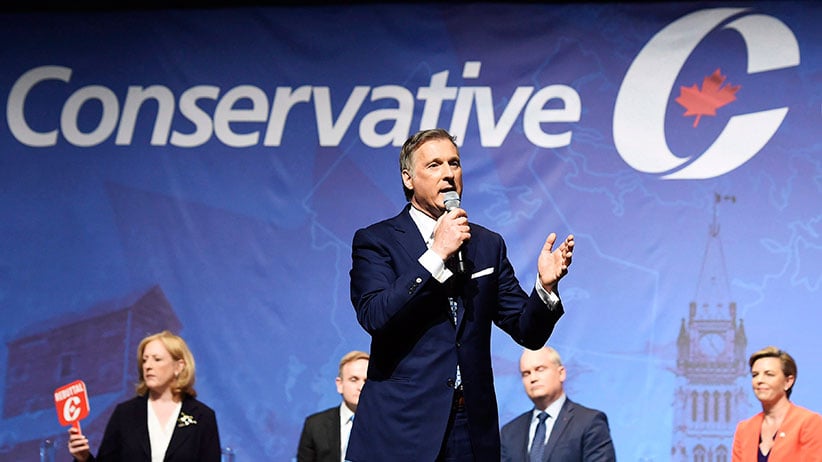 The luck of the draw played a rotten trick on Conservatives this evening by arranging it so that Maxime Bernier, the putative frontrunner for their party’s leadership, delivered his speech to its convention just before Andrew Scheer, who is considered by many handicappers of this race to be running second.

Selecting at random the order in which the 13 contenders spoke must have seemed to the organizers like the fairest way. And what did it matter? What could go wrong? The problem, it turned out, was that Bernier didn’t really offer a speech at all, and then Scheer followed him—immediately—by delivering a pretty good one.

Bernier started out by showing the crowd of party members, gathered at a convention centre out by Toronto’s Pearson Airport, a video on the big screens. “It’s time to vote for what you believe in,” his voice intoned in the narration, over an oddly ethereal soundtrack, which featured rather ominous slow drumming. The rest was mostly clips of ordinary Canadians voicing their enthusiasm for the libertarian-minded Quebec MP to succeed Stephen Harper.

And then Bernier strode to the podium, tall and handsome, attired in one of his typically terrific shirt-tie-and-pocket square combos, and said… not much. His campaign officials had told reporters beforehand that Bernier would speak off the cuff, without a prepared text. They weren’t kidding. He thanked supporters, praised the field for a good competition, and before you knew it, he was wrapping it up. “I’m very proud to be a Conservative, I’m very proud of our party, and I’m looking forward for tomorrow, and all together we will build a stronger country,” he said. “Thank you very much.”

READ MORE: How the 2017 Conservative leadership vote will work

Scheer took over next. His was an entirely conventional, eminently competent performance. His core theme was that hardy Tory perennial: Conservatives create wealth, Liberals just spread it around. “Conservatives are the party of prosperity, the left trades in envy,” said the Saskatchewan MP and former House Speaker. “There is no prosperity for any Canadian in a system where the government is focused on redistributing wealth instead of creating prosperity.”

RELATED: Why the Conservative Party should remain optimistic

Scheer took care to offer true believers some stuff to sink their teeth into. He repeated his pledge to withhold grants to universities so in thrall to “political correctness” that they stifle debate. He vowed to send Canadian fighter jets back into combat against the Islamic State. Overall, a well-crafted short speech, delivered in both official languages, with an agreeable smile, and a judicious mix of platitude and policy.

If this were an old-fashioned convention, where many delegates were still making up their minds about which way to vote, the stark contrast between Bernier and Scheer might be powerfully meaningful to the outcome. As it is, though, Conservatives have been voting by mail for a few weeks, and only a small number have waited to cast their ballots on Saturday at a limited number of polling stations.

Indeed, Ontario MP Lisa Raitt, who is thought to have little chance of winning after running a disappointing campaign, candidly suggested in her speech that the outcome probably can’t be altered this weekend, and so she issued a plea for unity. Still, consequential or not, those speeches were given. If Bernier wins, the fact that he failed to impress in this final showcase—while being overshadowed by perhaps his nearest rival—has to leave some Conservatives feeling uneasy.

It wasn’t just Scheer who seemed better able to connect with the room. Ontario MP Erin O’Toole’s speech adeptly highlighted his military background, and he scored perhaps the evening’s most genuine laugh, when he said, “For the record, I am younger than Justin Trudeau: This is what a life of hard work looks like.”

The candidacy of Michael Chong, another Ontario MP, has been defined by his advocacy of a carbon tax—a deeply unpopular position among many Conservatives, especially in Alberta and Saskatchewan oil country. Chong tried to pull the focus back to where he put it at the outset of the race, on his parents’ immigrant backgrounds.

“More than five decades ago, after the Second World War, two young immigrants came to Canada, a Dutch woman and a Chinese man,” he said of their stories. “I’m the witness to our nation’s ability, generation after generation, to look beyond a person’s colour or creed, to harness their ambition to build a better Canada.”

This long night of 13 speeches offered quite a few moments of that sort of personal-narrative interest (though not from Bernier). But did any of it matter? The Conservative Party sent out over 250,000 mail-in ballots to its members a few weeks ago. They had to be received by the party by 5 p.m. Friday to count. There remain 14 polling places where party members can vote on Saturday.

The ballots themselves are complex. Voters rank their top 10 choices in order. The candidate with the lowest vote total will be dropped off, and his or her ballots redistributed by their second choices, until one candidate has a majority. To ensure every riding across the country has equal clout, regardless of membership, each is worth 100 points. That means the 50 per cent-plus-one needed to win adds up to 16,901 points.

The results are scheduled to be announced starting around 5:45 p.m. on Saturday, with the final winner likely to be announced by about 7 p.m., according to party officials, depending on how many ballots it takes for a winner to emerge. If that winner is Maxime Bernier, his Saturday acceptance speech will have to be remarkable to settle the nerves of Tories he failed to reassure on Friday night.