Paul Wells: The Liberals' best hope now? Trudeau must portray himself as the person best equipped to clean up Justin Trudeau's mess. 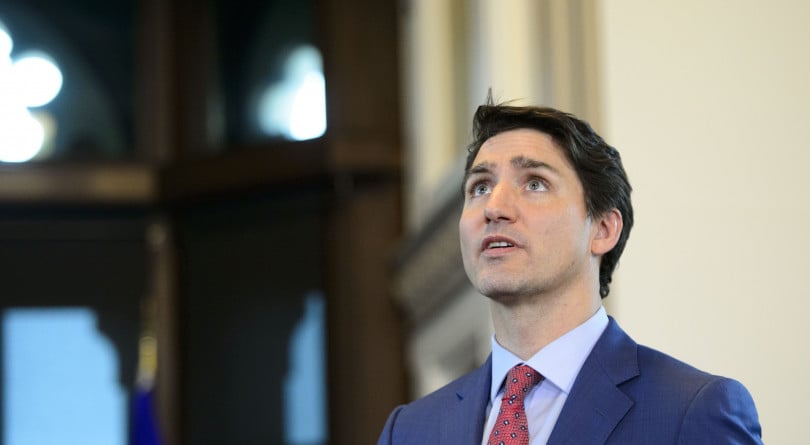 Trudeau looks on as he meets with Alberta Premier Jason Kenney in his office on Parliament Hill in Ottawa on Thursday, May 2, 2019. (THE CANADIAN PRESS/Sean Kilpatrick)

That’s a pretty devastating Angus Reid Institute poll that came out on Friday. Justin Trudeau’s Liberals 13 points behind Andrew Scheer’s Conservatives. Liberals in third place in every province west of Ontario, and across Atlantic Canada. (The perception in Alberta is that Trudeau is designing his energy policy to shore up support in British Columbia. If so, it’s not working.) Liberals 32 points behind the Conservatives among men 35 to 54, and only tied with them among women of the same age. Only 49 per cent of self-declared 2015 Liberal voters planning to vote Liberal this year. Net approval for Justin Trudeau (approve minus disapprove) at -39. Trudeau’s approval lower than Chrétien’s, Mulroney’s or Harper’s this far into their term as Prime Minister.

One other element of context: In provincial elections in Ontario, Quebec, Alberta and Prince Edward Island over the last year, the provincial Liberal parties didn’t just have a bad night: in each case, the Liberal party won its lowest share of the popular vote than in any election they’ve contested seriously since Confederation. (The Alberta Liberals did worse in the elections of 1940 and 1944 only because they ran only two and zero candidates in those elections, respectively.) It’s fashionable to note that voters often go one way federally and another provincially. Sure, sometimes, but they didn’t in 2014-15, when they elected Liberals in Ontario and Quebec, and Rachel Notley’s New Democrats in Alberta, before electing Trudeau’s federal Liberals.

Trudeau reversed a nasty polling disadvantage over the course of the 2015 campaign, so maybe he could do it again. But he represented the biggest change in a change election, and much of what he ran on then—electoral reform, pipelines, meaningful progress against climate change, visible progress on infrastructure, a Canada that would be vaguely but indubitably “back” in the world—will be a harder sell this fall. The last time a Liberal was the incumbent in a federal election, it was Paul Martin, and his Liberals lost about seven points of popular vote over the course of the campaign.

Politics isn’t physics, trends aren’t natural laws, and absolutely anything could happen before October. But it’s probably getting time for Liberals to panic.

Since they now have the least popular leader of any major federal party, a quiet reduction in the use of #TeamTrudeau hashtags on social media may be in order. Go with #TeamJauntyNamelessBiped, or since they’re largely bleeding to the left instead of the right, maybe The Newer Democrats. But branding changes probably won’t be sufficient. How can they turn the trend around?

Maybe they can’t. But if I admitted that were true, this column would end right here, so let’s indulge a few long shots.

As a very strong rule, an incumbent’s biggest advantage is, well, incumbency—the sense that they already are the government and their challengers aren’t, and why would you switch horses in midstream? For this reason, I’ve always mistrusted advice that an incumbent should offer “change.” I wrote a book in 2006 that was partly about how misguided that gambit was when Paul Martin tried it. It turned out Martin had been spotted at some cabinet meetings during the period he now wanted to disown. Voters decided change would best be delivered by somebody new.

But what the heck, any port in a storm. The Trudeau Liberals’ best hope at this point is to run against the incumbent. Trudeau must portray himself as the person best equipped to clean up Justin Trudeau’s mess.

I’m kind of serious. There’s even precedent: Stephen Harper’s 2008 sweater-vest election, when he ran almost comically grandfatherly ads (seriously, look at this one) to rebut the notion that he was basically a thug. He had a cheerful breakfast chat with campaign reporters in Toronto (Harper ate nothing and drank only water) to blur accurate memories of his two-year feud with the Ottawa press gallery. The message was, essentially, “I’m not the person you have been watching govern the country for two and a half years. Or not always. Or not only.”

It’s not the only way to reverse momentum. Polarizing an election around a highly emotional issue is another. It’s the one Brian Mulroney used to win against the odds in 1988, when the election essentially became a referendum on free trade with the U.S. And it’s the play Harper ran in 2011, which he turned into a referendum on the wisdom of a Liberal-NDP coalition like the one that nearly took power from him in late 2008. But a polarizing election is hard to confect. If it happens, it’s usually just luck.

Mulroney’s 1988 issue was selected, not by a brilliant Conservative brain trust, but by the unlucky Liberal leader, John Turner. Losing Liberal campaigns, including the last three before Trudeau came along, often try to turn elections into referendums on health care or abortion rights. It normally doesn’t work at all.

It’s obvious Trudeau will frame October’s election as a fight against the local branch plant of Trump/Putin/Brexit/Rebel Media, in the person of Andrew Scheer. And there’ll be evidence to support the claim. But it’s unlikely to be an effective polarizer. Just about anything you can think to say about Scheer, from this perspective, was said about François Legault, Doug Ford and Jason Kenney, the winners of the past year’s biggest provincial elections. With mixed-to-historically-bad results for those gentlemen’s opponents.

No, when barely half of your vote from last time plans to come out for you next time, you need to show some sign that you get it. What would that look like?

Trudeau could begin by splitting several elements of the 2019 omnibus budget-implementation bill out and making a show of cancelling them. It would suggest he understands why sneaking your governing agenda through, like so many dogs standing on each others’ shoulders under a trench coat, comes off as sneaky. I nominate the half-billion-dollar subsidy to Paul Godfrey and the rest of the traditional news industry, as one candidate for early cancellation.

The Prime Minister could also stop letting it be put about that he can’t change staffing in his office because “it’s an election year.” It’s the equivalent of campaigning in a bus with I’LL BE PARALYZED WITH INDECISION FOR ONE-QUARTER OF THE TIME I’M IN OFFICE emblazoned on the side. Gerry Butts left in February. Ottawa scuttlebutt says nobody else is a “good fit” for this PM. Wait a minute: when did the gregarious glad-handing Trudeau become Howard Hughes, peeing into bottles and afraid to talk to strangers?

The Trudeau Liberals used to flatter one another on the quality of their staffing by saying, “Nines hire tens.” The best thing that can be said for that slogan these days is that it would be worth trying, for a change. There are, let’s say, 600 senior executives in business, universities and non-profits in this country. Can none run a large organization, and will none do so when asked by a Prime Minister whose party many of them voted for in 2015? If not, then maybe this government should pack it in right now.

Above all, since the lurid defenestration of former star candidates Jody Wilson-Raybould and Jane Philpott does not appear to have put an end to Trudeau’s troubles, maybe he could start by admitting to himself that he is having troubles. He doesn’t seem to be there yet. The “angriest pundits had never been crazy about him being prime minister in the first place,” he told my colleague Susan Delacourt (in her paraphrase of remarks he made in an informal setting) a couple of weeks ago.