McKenna looks to build bridges, in more ways than one

Politics Insider for Nov. 28: How Scheer can save his leadership, Freeland scrambles for USMCA side-deal and McKenna lays out her infrastructure vision 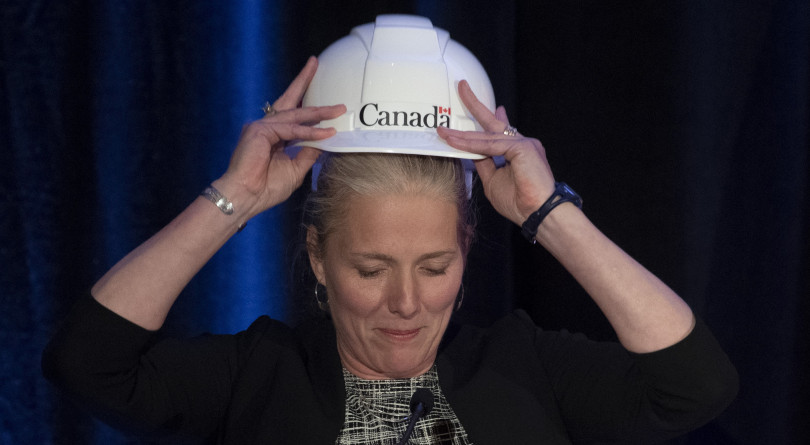 Infrastructure and Communities Minister Catherine McKenna puts on a hard hat during her speech to the Federation of Canadian Municipalities in Ottawa, Wednesday, Nov. 27, 2019. THE CANADIAN PRESS/Adrian Wyld

Saving Andrew Scheer: Shuffling staff isn’t going to solve the problems facing Andrew Scheer as he struggles to hold onto the leadership of the Conservative Party, writes Andrew MacDougall. Instead, Scheer needs a major makeover, fast:

It’s a poor workman who blames his tools but Andrew Scheer doesn’t exactly have much in the way of money these days, does he? And so it was happy trails to Chief of Staff Marc-André Leclerc and Director of Communications Brock Harrison this week as Scheer 2.0 boots up to take on Justin Trudeau in the coming session of Parliament.

Now, having been one myself, I would like to think directors of communications are the engine room of any properly functioning political outfit but, in reality, I know we’re just the idiots who brief the press. It’s a high-risk environment and a tough gig. There’s a reason Stephen Harper went through eight of us in his time in government; we’re like the dudes who wear the red jerseys in Star Trek, only more disposable. And while it’s true some comms directors wield big influence, nobody in their right minds actually thinks we’re the ones calling the shots (including the press).

Today Scheer is expected to announce his “leadership team” of MPs who’ll herd Conservatives in Parliament, followed by the selection of his shadow cabinet. Meanwhile NDP leader Jagmeet Singh is also set to reveal his shadow cabinet later today.

Waiting on a deal to seal the deal: Former foreign affairs minister-turned intergovernmental affairs minister-yet still U.S.-Canada trade minister Chrystia Freeland received an uncharacteristically warm reception from U.S. trade representative Robert Lighthizer when she arrived for meetings in Washington aimed at clearing the way for Congress to ratify the USMCA trade deal. Lighthizer made a show of giving Freeland three cheek kisses in front of the cameras. Will the talks result in enough changes to win over Democrats? We’ll know more today, but Mexico’s top trade official was upbeat: “Everything looks like it’s heading in the right direction.”

Looking for a hard-hatted woman: To say the pace of infrastructure development was underwhelming during the Trudeau government’s first term in office would be an understatement. Catherine McKenna used her first speech as the minister in charge of building things to tell municipal leaders that’s going to change. Donning a white hard hat she said the key was to work “collaboratively” with the provinces to get shovels in the ground, a contrast to the Liberal election platform that accused provincial leaders of roadblocking infrastructure projects.

National pharmacare—the time is now: Our patchwork approach to prescription drug coverage has failed us, write former health minister Jane Philpott and Dr. Danyaal Raza, the chair of Canadian Doctors for Medicare, and exposes individuals, households and businesses to significant financial risk. Which is why this is the right moment for a national pharmacare program:

A Liberal minority government led by a prime minister with an international following. An NDP leader representing Burnaby, with an abiding interest in universal healthcare. And a combined voting bloc large enough to push any legislation through the House of Commons. No, this is not 2019, though history may repeat itself.

The scenario as described is 1966, under conditions that led to the expansion of medicare from coast to coast. The players then were Lester Pearson and Tommy Douglas. But in 2019, the scene could also describe Justin Trudeau and Jagmeet Singh. With Patty Hajdu newly appointed as Minister of Health, Trudeau has chosen someone with experience in public health and a reputation for taking on tough issues. Much like 1966, 2019 is an opportune moment for medicare. Read more ››

Let us know: Help us better understand what you’d like from the Maclean’s Politics Insider newsletter. This short survey will only take a few minutes to complete. We really appreciate the feedback.