House of Commons' health committee, doctors and advocates all want the federal government to declare an emergency over drug-overdose deaths 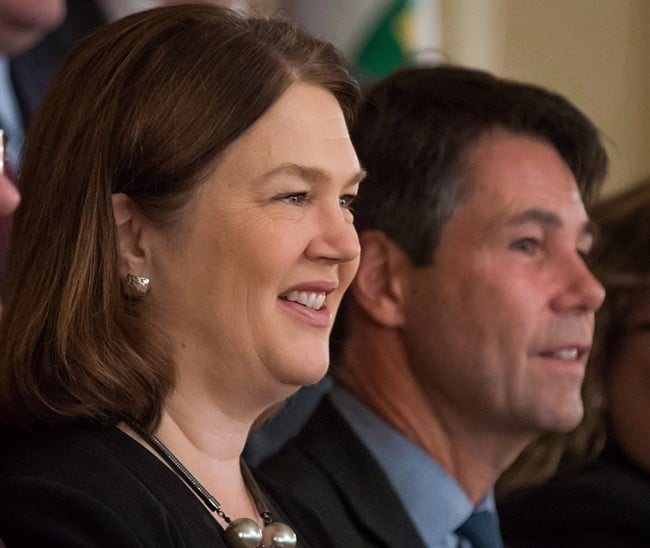 Federal Minister of Health Jane Philpott, left, and Ontario Health Minister Eric Hoskins sit for an official photo before the final day of a meeting of provincial and territorial health ministers in Vancouver, B.C., on Thursday January 21, 2016. (Darryl Dyck/CP)

OTTAWA – Canada should declare a national public health emergency over its deadly opioid crisis, health care experts urged Friday as the perils of addiction, overdose and death came under the microscope in Ottawa.

The country with the second-highest per capita prescription drug rates in the world now faces a situation so dire it demands a response at the highest levels of government, said Dr. David Juurlink, head of pharmacology and toxicology at Toronto’s Sunnybrook Health Sciences Centre.

Politicians gathered with public health experts, doctors and advocates — many of them ordinary Canadians who have lost loved ones to drugs — during Day 1 of a two-day summit in Ottawa aimed at hashing out possible solutions.

Donna May, whose daughter Jac was 35 when she died of a drug overdose, said she supports calls to declare an emergency.

“I am calling it epidemic,” May said.

The House of Commons health committee also recommended such a declaration in an interim report tabled on Friday.

Declaring an emergency “takes out of the political realm the singular job of protecting public health and gives it to the people who are tasked with and empowered to do that,” Juurlink said.

NDP health critic Don Davies said there’s a clear consensus that leadership and effective co-ordination at the federal level would have a major impact on reducing overdose deaths in Canada.

“We urge the federal government to take immediate action to help save lives,” Davies said in a statement.

A public health emergency is considered an option of last resort, said Dr. Gregory Taylor, Canada’s chief public health officer. Such measures have never been enacted in the country, he added.

“The closest we’ve done is the War Measures Act in the 60s,” he said in an interview. “It is seen as a resort when the provinces are running at capacity and truly need help.”

The chief public health officer would not have any new or special powers if a public welfare emergency was declared, Health Canada said. Nor is the federal government precluded from taking action without one, it added.

“If there are tools that are available to me that we believe will be helpful, I will find the authority and go through the appropriate steps to be able to access those tools,” Philpott said.

“If we determine this is an appropriate tool, certainly we would do so.”

Philpott has admitted she is unhappy with a lack of data and surveillance programs that could shed light on how many opioids are prescribed, where they are coming from and how many people are overdosing and dying.

However, the problem requires a concerted, multi-pronged approach among multiple jurisdictions and won’t be solved overnight, she warned.

The two-day meeting is being co-chaired by Philpott and Ontario Health Minister Eric Hoskins, both of whom are doctors themselves.

It is important to not get too hung up on labels, Hoskins said.

“I don’t think there’s a person in that room, the 250 odd people that are there, that does not believe this is a very urgent crisis, an emergency,” Hoskins said. “Our response needs to reflect that.”

Drug overdoses are now killing more people than motor vehicle accidents in some parts of the country, Philpott said.

B.C. Premier Christy Clark is also pressing Ottawa to take steps to stop the flow of fentanyl from China — a drug that prompted that province to declare its own public health emergency last spring.