Meet Naboo, the service dog being fostered in the halls of Parliament

Heritage Minister Mélanie Joly weathered the roughest patch of her political life last fall, but looking after a future service dog made it a little easier 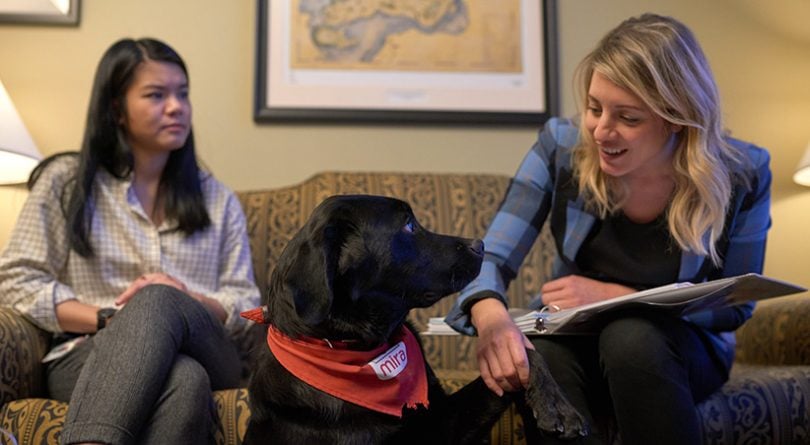 Minister Melanie Joly with her foster dog Naboo at the Justice Building in Ottawa. (Photograph by Jessica Deeks)

Mélanie Joly is minister of Canadian heritage and master of a dog named Naboo. The Labrador retriever/Bernese mountain dog has shadowed her to Centre Block, restaurants and a meeting with the Prime Minister.

“Je t’aime,” the minister of Canadian heritage tells the dog at their shared ofﬁce one winter evening. He is hazardously cute—his eyes all up in their sockets and paws all plump in their pads—such that Joly can’t help but bend beneath the coffee table to haul him up by his warm armpits. “When I’m with Naboo, I can be a normal person,” she says.

Joly has been fostering Naboo since last summer, while he waits to enter training as a service dog. The MIRA Foundation bred the dog to assist a person with visual impairment or autism, and until the dog was old enough for training, Joly co-parented with a friend, commuting between Ottawa and her Montreal riding with 55 lb. of domesticated joy. 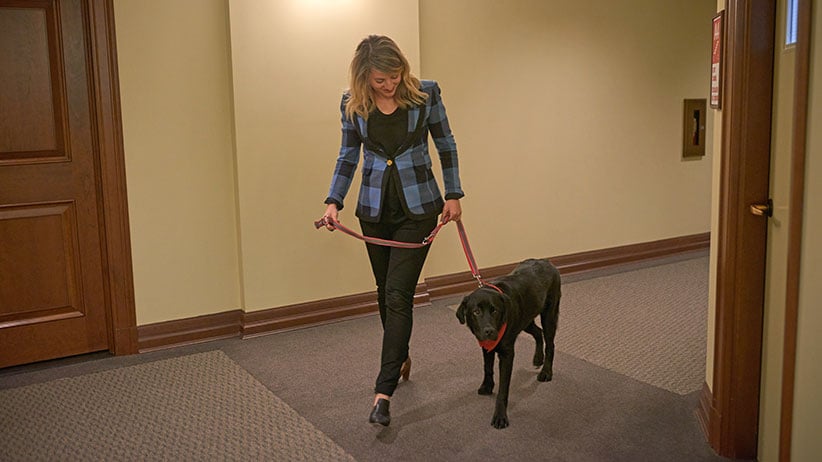 Walking the halls of the Justice Building in Ottawa. (Photograph by Jessica Deeks)

Joly and her ministry have faced serial criticism since July, as Canadians denounced her for the logistical mess of a Canada 150 event on Parliament Hill and a controversial tax exemption for Netflix, for which she was ridiculed on the Quebec talk show Tout le monde en parle. After the December break, she slipped straight back into censure as she championed a skating rink on the Hill that was widely declared a waste of $8.1 million.

The dog did not serve as a support animal for Joly, but he did help relieve stress and enforce routine. She must now give the dog back to MIRA, but behind the scenes of the roughest patch of her political life was a bilingual pooch dressed in a chewed-up handkerchief. 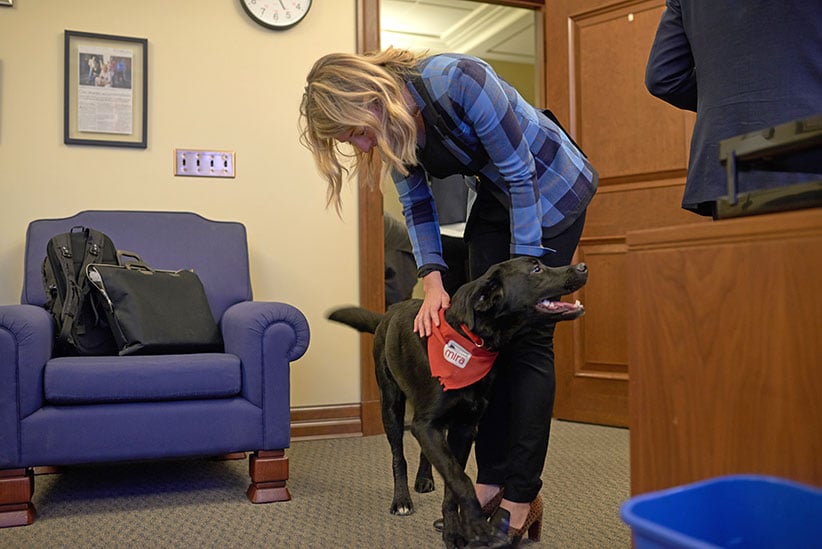 “When I’m with Naboo, I can be a normal person,” says Joly. (Photograph by Jessica Deeks)

“He was there for the last period of question period of the year,” Joly says. “He was there during cabinet,” she adds, though he waited with staff outside the room. “We did an event for Christmas with all the MPs and their spouses. Naboo was there.”

Joly met the dog through her friend Francis Gosselin, a well-known entrepreneur in Montreal’s creative community whom she met shortly after losing the Montreal mayoral race. Gosselin has fostered three MIRA dogs, and since he couldn’t care for another one alone, he recruited Joly and her spouse, entrepreneur Félix Marzell, who leads a creative agency called Dix au carré. (The dog’s birth certiﬁcate reads Naboo 17, named after a planet in Star Wars mixed with his year of birth.)

The foundation covers the cost of food, health care and breeding, and Naboo is worth an estimated $4,475 when he turns one. After evaluation, 40 per cent of dogs are disqualiﬁed from becoming service dogs due to behavioural or other flaws, and if Naboo doesn’t pass, Joly would have the option of paying a fraction of the cost to buy him. Gosselin expects she would take it, as she’s always been eager for her share of custody. 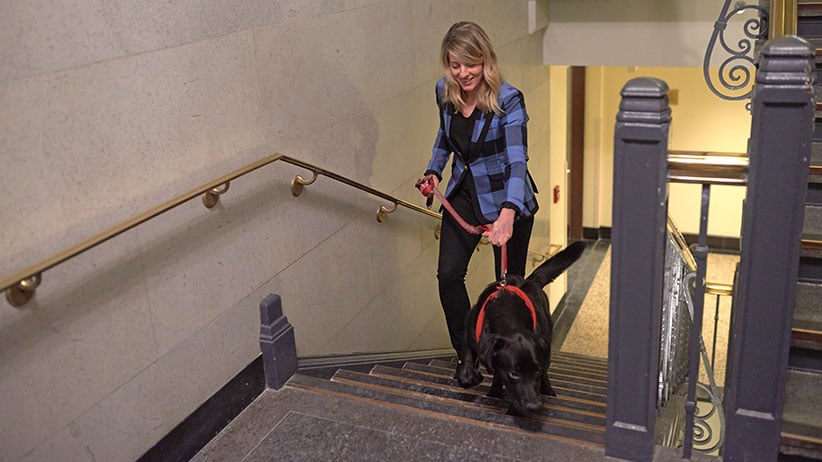 Trained to be bilingual, Naboo responds to commands in both English and French. (Photograph by Jessica Deeks)

“Honestly, when I don’t give [Naboo] to her fast enough, she calls me up and asks for him right away,” says Gosselin. “At ﬁrst she liked the idea, and now I think it’s almost like she can’t live without him.”

The dog followed Joly to meetings with teleﬁlm producers in Quebec and has met artist Kent Monkman. “He’s been actually to the opera, so he’s a very culture-savvy dog,” Joly says. Naboo responds to instructions in both ofﬁcial languages.

Joly isn’t the only Liberal member of Parliament raising a future service dog. After Toronto MP James Maloney discussed the idea with his wife, Deirdre, she greeted him at the airport in late January holding a yellow Labrador, Walnut.

“I’ve never fallen in love so quickly in my life,” says Maloney, who took him to the constituency ofﬁce with a bed and now posts updates on social media titled “the Walnut Weekly.” Maloney says the dog won’t be House trained. “I don’t want him peeing on the floor of the House of Commons or anything.” The dog is part of the Lions Foundation of Canada Dog Guides. “This dog is going to change somebody’s life,” Maloney says.

Naboo helped in Joly’s life, for amid the erratic hours of politics, the dog had to be fed at 8 a.m. and 8 p.m. every day, and Joly had to walk him before and after his meals. “It brought a bit more of a discipline and a routine,” she says.

Joly says she’s often felt anxious since high school and continues to deal with performance anxiety. She protects non-negotiable gym time to mitigate some of her stress, but pets can be more calming. “It’s great to be able to do zootherapy in the Ottawa bubble,” she says. “Animals have that power of being able to get rid of all your anxiety, so when I’m with Naboo, I’m just actually having a normal life.”

To walk him, Joly double-wraps the leash around her hand. “The thing is, he’s getting stronger,” she says. “I’m losing him soon,” she said in early February, although the loss had yet to sink in. “I don’t really realize it.” From the way he runs beneath the bridge of her legs, it appears he doesn’t either.