Paul Wells: A tendency to experience heartbreak on the job isn't unique to this prime minister 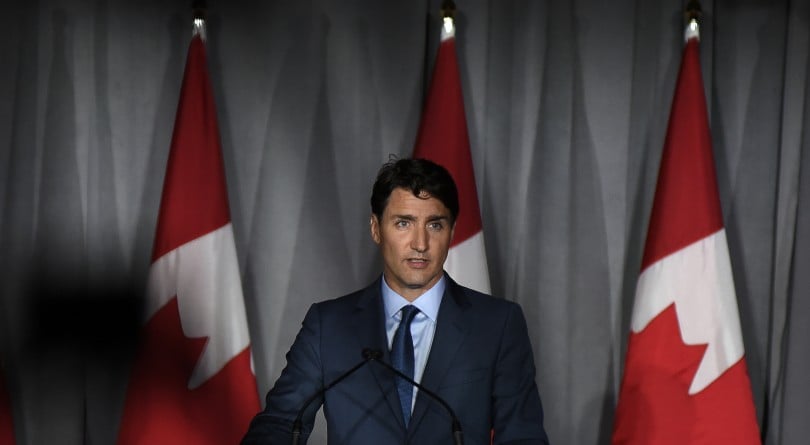 Justin Trudeau, Leader of the Liberal Party of Canada, speaking to supporters at a Liberal fundraising event in Brampton, Canada on July 5, 2018. (Photo by Arindam Shivaani/NurPhoto via Getty Images)

I have no particular insight into the news that the federal government has spent $4.5 billion to buy a pipeline it can’t expand, but there’s room at least for this general insight: there are days when the top job in the country is awful.

We can push the point a little further without fear of contradiction. There comes a day in the career of every prime minister when the very thing that most excited him (or one day, again, her) about getting the job becomes the thing that makes the job a sack of poo. Reconciling the need for a clean environment with the need to get Canada’s natural resources to market wasn’t peripheral to Justin Trudeau’s governing project, after all. It was right at the centre—along with electoral reform and getting Canada a seat at the United Nations Security Council. Speaking of which, don’t ask.

But back to pipelines and climate change. In a speech to Calgary’s Petroleum Club fully two years before he became prime minister, Trudeau said “a fundamental role of the Government of Canada” was “to open up markets abroad for Canadian resources, and to help create responsible and sustainable ways to get those resources to those markets.”

READ: If Justin Trudeau loses, it will be because of Andrew Scheer’s secret weapon

So far, I think it’s fair to say progress is limited.

And it’s limited in spectacular ways: a court shuts down the Trans Mountain pipeline expansion, at least for now, on the eve of the feds’ purchase of the whole mess. With your tax dollars. And no clear way forward. While Chrystia Freeland and Gerry Butts are in Washington trying to salvage NAFTA. Which, incidentally, is also looking peaked.

The Conservatives are beside themselves with glee at the PM’s discomfiture, but he doesn’t even need the Conservatives to be hating this week. The only thing that could make it worse for Trudeau would be a nearly coast-to-coast political rejection of his proposed national carbon pricing scheme. Which is still a hypothetical, so long as you don’t look at the headlines.

Again, this tendency to experience heartbreak at the heart of the job isn’t unique to this prime minister. It’s something they all experience. I’m not normally one to describe the prime minister’s role in Biblical or Shakespearian terms. Most days it’s just an administrative job, albeit one with elevated challenges and deep rewards. But every prime minister who’s lasted more than a few months has, sooner or later, reached an existential crisis.

Stephen Harper faced a bunch, from the 2008 coalition crisis that briefly crystallized his fear of being outnumbered by opposition parties to the 2014 terrorist attack on Parliament’s Centre Block, which by all accounts left Harper badly rattled. But if there’s one moment that marks the beginning of his decline from a majority government to defeat, it’s the decision, early in 2012, to pick simultaneous fights with every opponent of new oil pipelines. The decision wrecked Harper’s relationship with the Obama administration; it led to a deeply out-of-character and futile attempt to replace the Americans with China as Canada’s preferred global resource-export destination; it put Harper, who had worked hard to build a broad Conservative coalition, firmly on one side of a deeply polarizing issue; and despite all his huff and bluster, it didn’t make him more effective on the energy file. The end of the Harper government starts right here.

Jean Chrétien came to office promising to scrap the GST, cancel the privatization of Pearson Airport in Toronto and abandon his predecessor’s plan to buy new military helicopters. Every one of those promises was still tormenting him years later: his deputy prime minister had to resign her seat and run again over the GST promise, it cost $60 million to settle with the jilted Toronto airport suitors and to this day Canadian Forces pilots get around by hopping up and down and making whirring noises with their mouths. But surely the fight of Chrétien’s life was national unity. And it was his desire to do whatever was necessary on that file except take care with the details that permitted the sponsorship scandal that cast the Liberals into darkness for a decade.

Brian Mulroney dealt with the job’s bitter disappointments by claiming to find honour in the unpopularity his grand schemes bought him. If he meant it, he must be a happy man, because his unpopularity bought him a lot of honour. He, too, was haunted by the notion that he could bring Quebec into Canada’s constitutional framework “with honour and enthusiasm.” The man who wrote that phrase for him, Lucien Bouchard, turned against him on a scale to dwarf Maxime Bernier’s little rebellion, and the Meech-Charlottetown pair of constitutional-reform disasters consumed Mulroney’s last years in office, ended the career of almost every provincial premier who worked with him, and made the 1995 Quebec secession referendum inevitable. (Whenever I write something like this, a Mulroney friend or relative writes to tell me, at great length, that it all started out as a great success. To which I can only say congratulations, I guess.)

Again, this is not a list of prime ministers who screwed up on important files, because the list would eventually include all of them. It’s a measure of the position, not of its occupants. Canada is a wonderful country, but its contradictions cannot be chased away with charm or fleeting popularity. They lie in wait. They grind you down. Pierre Trudeau had his triumphs, including a thumping referendum victory and the Charter of Rights, but his marriage collapsed and his party was unelectable across most of the Prairie West for a generation. Lester Pearson ran as a cure for John Diefenbaker’s dithering. He promised “Sixty Days of Decision.” On day 59 his finance minister offered his resignation. This job tests its occupants in ways none could predict. It does it every time.