Michael Wernick has some advice

Paul Wells talks to the former clerk of the Privy Council about his advice to Prime Ministers, the time pressures of governing, and political exits 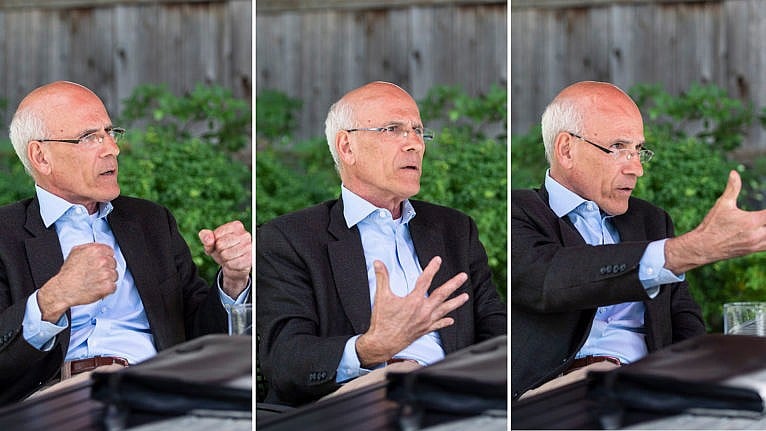 Wernick, former clerk of the Privy Council of Canada, participates in an interview with Maclean's, on Sept. 16, 2021. (Photograph by Justin Tang)

Brian Mulroney was the prime minister the first time Michael Wernick sat at the back of a cabinet committee room, taking notes. One time the young civil servant found himself transcribing John Crosbie’s remarks as the powerful fisheries minister recited arguments Wernick himself had put into Crosbie’s briefing notes. That particular ouroboros of influence was “quite exciting for a young desk officer,” Wernick said in an interview shortly before the recent federal election.

The venue was my back yard. The occasion was the release of Wernick’s new book, Governing Canada: A Guide to the Tradecraft of Politics (UBC Press). Wernick was a senior official for decades in Ottawa, a deputy minister under Paul Martin and Stephen Harper. Justin Trudeau made him Clerk of the Privy Council, a position from which Wernick retired amid the SNC-Lavalin controversy in 2019, after Jody Wilson-Raybould released a surreptitious recording of a conversation with Wernick.

Wilson-Raybould, clandestine recordings, and the doctrines of independence for attorneys general are not topics of Wernick’s book, and he made it clear he preferred that they not figure in our interview. I relented, mostly. I’ve known Wernick for 26 years. He’s been learning how Ottawa works for longer than that. The lore he’s accumulated, poured between the covers of a slim volume aimed at students of political science, is a valuable contribution to Canadians’ understanding of how they’re governed.

“I didn’t want to write a memoir,” Wernick said. What came out instead is “a kind of an amalgam of many experiences with different ministers and three prime ministers that I got to work with reasonably closely. I was trying to capture those conversations—what it’s like to sit across from the new minister after swearing in, or some of the conversations that go on. Particularly in the early days of a government as they’re finding their feet or learning their skills.”

For the longest time he couldn’t settle on a format. He finally found a model in Renaissance Florence.

“I have a daughter who’s studying political science at U of T. She was doing a political theory course. And she was home for Christmas, but still working on a paper. And one of the things on that second-year political science course, that I took umpteen years ago, is [Niccolo Machiavelli’s] The Prince. It’s second-person advice on statecraft. It’s held up for a long time. And that gave me that sort of lightbulb moment. ‘Oh, I can do something that way. I could do it direct and second-person advice to somebody who’s coming into that position.’ That unlocked the whole thing for me.”

The resulting book is nearly devoid of juicy insider gossip—never Wernick’s style—but full of pithy advice to political leaders in general. “If you can end a meeting early and gain a sliver of time,” he tells prospective prime ministers, “get up and leave.” And, elsewhere, “It is rarely to your advantage to meet the premiers as a group.” And, ahem, “The longer you are in office, the more courtiers you will attract.”

From various perches in the senior ranks of the public service, Wernick watched three prime ministers land in the top job and try to figure out how to govern. “There is a skill set involved in governing,” he said. “We seem to expect people to learn that skill set on the job quickly, without a lot of help.”

And yet the days after a gruelling election campaign are nearly the worst time to be starting a new job. “One of the things I try to emphasize is the human element of it. People come in off an election campaign, exhausted. Physically exhausted. And in a state of considerable disruption. Often they’re new to being a minister. They’re also new to being an MP. They have to make decisions about their family, relocate or not to Ottawa. They’re changing locations. They’re changing careers, fundamentally. And I was always warning public service colleagues, ‘You have to allow for that. Allow for some of that exhaustion and shock.’”

New governments have only a few weeks to get up to speed. And habits that are formed early are not likely to be substantially revised later, with the benefit of hindsight. By then it’s too late. “The Prime Ministers I saw settled into the job very quickly. But then it’s hard to change. They get into a comfort zone or routines and patterns. It’s a very human thing to do. So part of my purpose in the book is just to say, ‘Pause and be a little bit mindful of the how of governing before it all gets locked in.’”

One of the recurring themes in Wernick’s book is how little time everyone has. A federal cabinet will have 100 hours in a year for all of its plenary discussions. Maybe 120. It’s never enough. “It’s overbooked from day one until the day they leave. And you’re always making choices: to do one thing means not doing something else. And mindful management of the allocation of time is really important. It can get away on you.”

The cabinet is going to need a lot of help. That was Wernick’s job, and that of all his bureaucratic colleagues, as well as countless political staff, operating with different aims and methods. “When it works well, you have a certain balance in what I call a triangle between the decision-maker—could be the PM, could be a minister—the support network they get from the public service, and the support network that they get from the political side.”

Sometimes the triangle gets out of balance. “The system gets into trouble when the public service tries to anticipate politics too much. And it clearly gets into trouble when the political side starts trying to run departments administratively. If people keep in their swim lanes and understand each other’s roles, each can add something. I always found it irritating when people chided ministers for being political. They’re supposed to be political in a democracy.”

I asked Wernick about a favourite Ottawa worry, that the public service is losing its ability to generate new ideas and policies. He didn’t bite. “I think there’s a little bit of a mythology that there was some other time when the great and good mandarins of the town—all white males, by the way—generated the ideas and pushed them towards the political system,” he said.

“I think there’s a competing narrative that the policy space is much more open and inclusive than it ever was. The costs of entry are much lower. Anybody with a laptop and a Google account can be a policy analyst. When I joined government, we had a quasi-monopoly on the ability to run big simulation models on income-security programs. Now many university professors can do it better.”

Besides, “I don’t think it’s really the role of the public service to be the originator of new ideas. Those usually come from democratic politics: ‘We wish to decriminalize cannabis.’ And then you work through the problem of how to do it competently.”

Governing Canada includes some pointed advice to cabinet ministers about the fact that they’re probably not going to get a chance to choose the date of their departure from politics. Prime ministers and voters have a way of making those decisions quickly and at inconvenient moments. Did I detect an autobiographical element to these passages?

“That’s largely true of clerks and public servants as well,” Wernick said. “Or hockey coaches. Like, there’s a lot of job jobs where you can’t arrange a perfectly-timed departure. I’m not the only person who’s been backed into a corner where it was impossible to continue to do the job. It’s unfortunate, but it happened.”

“But it’s happened to other people. Circumstances get away on people. People fall into all sorts of things that make it untenable for them to continue in the job.”

When things got weird for Wernick, did he draw any comfort from those earlier examples?

“No. I mean, that’s not the way I’d put it. I was conscious, during those last few months, that I was drifting towards a zone where I couldn’t do the job anymore. I was becoming part of the story. You have to enjoy at least some basic level of trust from the opposition leaders. I didn’t have that. And that just made it impossible to carry on.”

If he had a do-over, would he handle SNC-Lavalin differently? “That’s probably for another day, in another interview. I did not pick up on some of the warning signs about the trouble that was coming…. But I don’t spend a lot of time thinking about that. You work and live in the moment and you do the best you can at the time.”

I tried one more question that was a little closer to the concrete example of the current government than to the trends and aphorisms Wernick’s book prefers. In the book, he writes to a hypothetical prime minister: “You will not be successful if you hang on to the same closed circle of close advisors and confidants for your whole time in office. There is an inevitable drift into a comfort zone and a form of groupthink that can create blind spots and put you at risk.”

Gee, did he have anyone in mind?

Butter would not melt in Wernick’s mouth as he told me he had no examples from current events. “The example I was actually drawing on was Stephen Harper in 2011. You know, the opposition leaders [Erin O’Toole and Jagmeet Singh, in the election that had not yet happened when Wernick and I spoke] probably have a transition team, who will give them some advice on how to set things up. And I worked with Derek Burney from the Harper team, and Mike Robinson from the Martin team, and Peter Harder from the Trudeau team.” Those new governments are always “very conscious and mindful about how they want to set things up.” But re-elected prime ministers “tend to just start up again, with the same people in the same processes. People have argued, and I think I agree, that Stephen Harper missed an opportunity in 2011, to pause and think.

“I would say to any Prime Minister, when they’re going into a second or third mandate: ‘You should pause. It’s going to be different. Think about the processes and the people.’”