Michelle Rempel demands more from politics—on the left and right 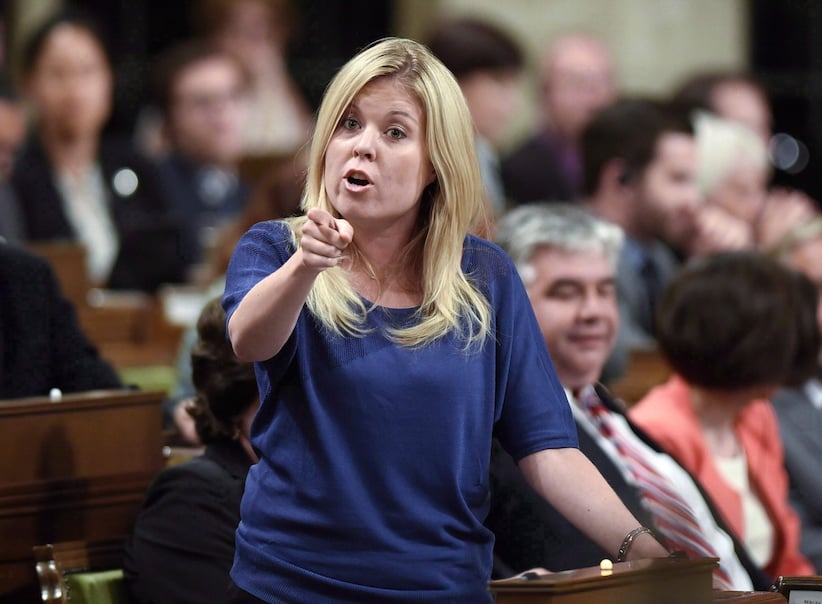 Conservative MP Michelle Rempel asks a question during Question Period in the House of Commons in Ottawa on Tuesday, June 7, 2016. (Justin Tang/CP)

For a prolific policy tweeter, Conservative MP Michelle Rempel sure seems to bemoan the reduction of debates into 140-character beefs. For an often relentless partisan who was a campaign regular defending her party on TV talk shows, she sure has regrets about how Conservatives have handled themselves on immigration issues, then and now. But she took the lectern at a Montreal conference on immigration Thursday and declared herself a centrist worried deeply about both sides of the debates, and the populist direction emerging at the edges of Rempel’s usual side.

The Conservative immigration critic was at a McGill Institute for the Study of Canada event regarding immigration and Canadian exceptionalism, but bemoaned that too many thinkers equate that with Liberal ideals and exceptionalism; she feels the Trudeau government has bungled the resettlement of Syrian refugees, and has been numb to the plight of the Yazidi minority in the Middle East. Rempel also proved to have sharp words for her own party, lamenting that caucus leadership asked her for a 140-character-ready response to Donald Trump’s refugee ban for Muslim-majority countries, and saying that sometimes she feels ideologically isolated within her own camp, particularly as skepticism of refugees and immigrants rises on the right. To an audience question on Tory leadership candidate Kellie Leitch’s idea of screening immigrants for “Canadian values,” Rempel chose her words carefully: “Dog-whistle politics are the worst. I’ll leave it at that.” To that end, she expressed distaste with her party’s line against permitting burqas at citizenship ceremonies or a “barbaric cultural practices tip line.”

She said Canada is lucky that unlike countries in Europe and United States, we don’t have a migration crisis to deal with. She cited the recent upswing in mostly African asylum-seekers sneaking in through Manitoba’s border and elsewhere, but said she was seeing Twitter users gripe about a huge flood of newcomers and replied: it’s no flood: “We’re talking about Canadian compassion.”

In the spirit of Rempel bemoaning soundbites and expressing preference for longer-form, fuller discussions, here is an abridged version of her McGill speech:

When I saw the title of this conference, Canadian exceptionalism: Are we good or are we lucky, I wanted to come here to make an alternate argument. I refute the premise of the question, because I think we are naïve in our arrogance that we are unexceptional. And I’m about to give a speech that will make absolutely no one happy. I’d like to take off my partisan hat for a moment and talk as a human being who is deeply concerned about the state of affairs in the world.

We’re not so great at it. The Komagata Maru, the MS St. Louis. There are examples of deep shame in our country where, when the rubber hit the road, we did not do so well. We were shamefully unexceptional. And if we don’t remember those incidences, and if we don’t remember that, and we somehow think that we’re this exceptional nation, I think we’re doing our public policy process a great disservice.

During the 2015 campaign, I thought all political parties, my party included, acted shamefully on the issue of immigration, because we used the Syrian refugee crisis as a political wedge in a political campaign, and that was wrong. The response to the Syrian refugee crisis became a campaign issue of one-upmanship on numbers, rather than talking about people as human beings. “Who’s going to bring in more?” When the question should have been: “How do we do it in a way that achieves social license in the country in an expeditious way that shows compassion and addresses the situation, and how do we support the integration of people when we come to Canada, such that we build social license for more refugees in the future, and ensure that refugees that come to Canada have a better experience here than where they came from?” That is not a politically sexy conversation, because it’s easier to say, “I’m going to bring in 25,000 and you’re going to bring 15, ergo you’re racist and I’m more awesome.” Not helpful. Also not helpful is to frame the issue of gender isolation in new Canadian women in the term of a tip line.

And what happened out of all that? Where we are today is we had a parliamentary study that looked at the response to the Syrian refugee initiative, and we had Syrian refugees come in front of a parliamentary committee and said: “I’m in a hotel room that’s infected by bed bugs, and my wife can’t go out and learn English because she’s got five kids. How are we going to have any hope to do anything well here?”

It’s not an adequate response to say, “It’s a nation-building project and the provinces are responsible for it,” when I have a school board come to parliamentary committee and say, “We’ve absorbed in our one city the equivalent of a full elementary school of refugees this year, they have needs that we need to address and need to be compassionate to because they’ve been in a war zone for years and their education has been disrupted, and we received no new funding for it. So in a political campaign for any political stripe to say it’s fully costed when there is no plan … not helpful. Not exceptional.

The thought that populist rhetoric can’t happen in Canada is shocking. The reality is that there has been a narrative that has arisen where you have groups of people who feel that their voices aren’t being heard, and it’s easy through 140 characters and short visual soundbites and memes to say it’s someone else’s fault. And in Canada, that’s still here. But the reality is there’s no “them” and “us” anymore. That’s not how the globe operates. We are so interconnected, be it through trade, or simply the reality of understanding our humanity through Twitter, through YouTube. You can see the destruction in Aleppo. To have that narrative be used in political discourse is disgusting and wrong, and oversimplified.

We all have to demand better. Demanding better for someone who’s a centrist like myself has been a very unpopular position. Because it means there’s no real home for me as a politician on some days. But it’s where we all need to be. There’s many other examples of how Canada in public policy has sort of politicized the system—they might not be as firecracker or high-profile as the barbaric cultural practices tip line. It’s things like lifting a visa requirement on a country without a formal review for some unquantified economic benefit. It’s policy around immigration that is politically motivated that is unquantifed and unsubstantiated—and both parties are guilty of this—that diminishes the public confidence that immigration is a good thing, and we are unexceptional in that, especially in Parliament.

Why should we all be listening to these sorts of things with an open mind? It’s because if we don’t do that, I’m really deeply concerned as a legislator about the peace of humanity right now, and that’s not hyperbole. When I see nationalist parties rise and gain seats in European Parliament, we should be very concerned. When I see the level of nationalist rhetoric that is acceptable among people that are pretty educated and smart people, that’s cause for concern. When I see protectionism and the thickening of borders as a populist public policy response in a globalized economy, we should all be concerned.

The way forward is to ensure we have a public policy dialogue that is not alt-right or far-left. It has to be in the middle and we have to focus not on values, but on programming and outcomes that enable what we vision exceptionalism to be. Things like: where is the smart conversation around the burqa? Where’s that safe space? I don’t wear one—women who wear one, where’s their voice on this? And why don’t we talk about the fact there are equally as many other religious groups who use dress as a control for women? So rather than judging them and shaming them, how do we reach out to them, and give them hope? The fact that we can’t even talk about that—I find as a politician, for me as a camera, even saying that is a risk. I’ve done something terribly egregious, by bringing up both sides of that argument. But if we can’t have this argument, how can we ever reduce issues like Islamophobia? The fact that we can’t have a discussion because we’re so polarized is why we need to acknowledge that we’re not exceptional.

You, as the thought leaders on this? It can’t be 140 characters “You’re a racist; you’re a socialist. You’re conservative; you’re Liberal. Your party sucked; your party sucked.” Come on. If we are truly exceptional, we have to show the world we’re better than that. And I’ll be honest with you, after 18 months of banging my head in both my own party and in the House of Commons against the Liberals, you’ve got to help me out too.

Where we are as a country, for us to be having a conference on how exceptional we are and how much better we are than the United States and we’re welcome to refugees is such a disservice to the fact that we’ve got a long way to go.

For all of you, from the bottom of my heart: let’s try to be smarter about this. And let’s demand better from our leaders. And maybe I’m going to go have a glass of wine.