Money a factor in 2015 election results, but no guarantee of success: analysis 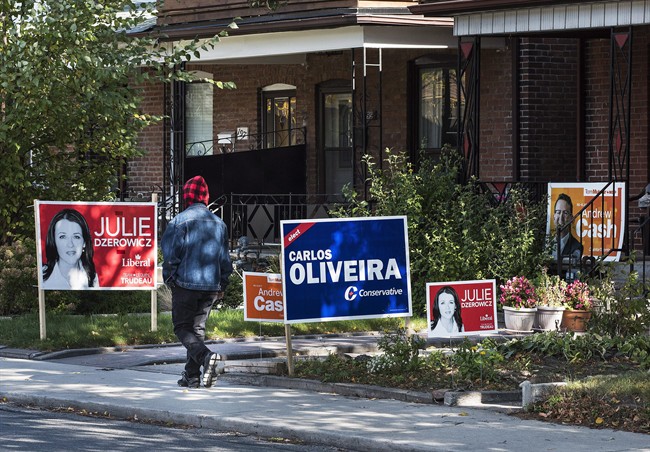 Campaign signs are seen on lawns in the Toronto riding of Davenport on Canada’s federal election day on Monday, Oct. 19, 2015. More often than not, the biggest spenders did not win on Oct. 19, an analysis by The Canadian Press indicates. (Aaron Vincent Elkaim/CP)

Or so it would seem, according to campaign financial reports filed with Elections Canada by the men and women who were seeking a House of Commons seat in last fall’s federal election.

More often than not, the biggest spenders did not win on Oct. 19, an analysis by The Canadian Press indicates.

And while spending big bucks didn’t necessarily guarantee victory, not spending enough to at least stay competitive with rival candidates was an almost certain path to defeat, the analysis shows.

Of the top 100 spenders in the election, 47 failed in their election bids, with 12 of those losing to a competitor who also cracked the top 100.

The results among the top 50 spenders were even worse, with about three-fifths of them — 31 candidates in all — running unsuccessfully. Of those, six lost to another candidate in the top 50.

The analysis is based on expenses reported by candidates that counted as part of their legal spending limits. It did not include personal and other expenses — like gas and mileage for a personal vehicle, child care or thank-you receptions for volunteers — which must be reported to Elections Canada but don’t count against the spending cap.

The analysis may help explain why the marathon 11-week campaign came down to a battle between the better-resourced Liberals and Conservatives, with the NDP and Greens squeezed out.

NDP MP Kennedy Stewart, for instance, spent almost $180,600 on his campaign in Burnaby South, while his Liberal opponent, Adam Pankratz, spent $33,902. Pankratz lost by a margin of just one percentage point, a result Koop suggests might have been different had the Liberal been more competitive financially.

“Most Canadians vote with the party in mind, so local spending and local volunteers are going to have a much more substantial influence in closer races,” said Koop, who studied the spending habits of local campaigns in the last election.

Candidate spending limits for the 2015 campaign varied from riding to riding, based on geographic size and population — from a high of $279,227 in Kootenay-Columbia to a low of $169,928 in Egmont. Under new election rules imposed by the previous Conservative government, the spending caps for the lengthy campaign were more than twice what they would have been for a more typical five-week federal contest.

That was widely seen as benefiting the Conservatives, whose riding associations across the country had amassed much deeper war chests. A previous analysis of electoral district associations’ 2014 financial returns found Tory associations ended the year with net assets totalling more than $19 million — more than the riding associations of the Liberals, New Democrats, Greens and Bloc Quebecois combined.

Yet the analysis of the more than 1,500 candidate spending reports filed thus far suggests few took advantage of the increased limits.

Combined, candidates for the Liberals, Conservatives, NDP and Greens — the parties which ran full or nearly full slates in all 338 ridings across the country — were entitled to spend $296 million. Yet their actual spending fell far short: just under $63.1 million in total.

Even adding in the personal and other expenses, total spending amounts to $72.6 million.

All candidates were required to file their financial reports by Feb. 19 but many were granted an extension. Some 200 have yet to file.

Analysis of the reports filed thus far further suggests that the Liberals and Conservatives ran fewer Potemkin campaigns — where candidates had their names on the ballot but few resources to mount a serious challenge — than the NDP or, especially, the Greens.

On the flip side, more than 180 Greens spent less than $10,000, including about 50 who spent less than $1,000 — more than the low spenders of the Liberals, Conservatives and New Democrats combined. Green party Leader Elizabeth May spent the most of any leader, almost maxing out the amount she was allowed to spend in her B.C. riding, but was the only Green elected.