Politics Insider for April 30: The House debates billions in student aid, Quebec jumps the gun and a former Liberal wants to lead the Greens 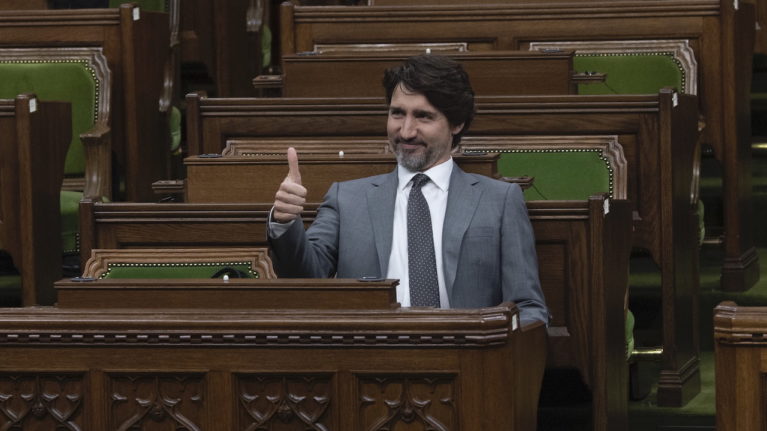 Prime Minister Justin Trudeau gives the thumbs up as he speaks with a Member of Parliament as they wait for the COVID-19 committee in the House of Commons Chamber Wednesday April 29, 2020 in Ottawa. (Adrian Wyld/CP)

It took until Justin Trudeau’s 42nd press conference in front of Rideau Cottage—he’s held a morning presser on all but four days since March 13—to announce an inspirational, cross-country tour of Canada’s beloved aerial acrobatic squad known as the Snowbirds. The Moose Jaw-based flyers, steering nine jets that are older than the PM, have been physical distancing for a month. Now they’ll spend a week spanning the nation, starting this weekend in Nova Scotia, to “salute Canadians doing their part.”

Sure, most Canadians won’t catch a glimpse of the tour, the cost of which surely won’t be cheap. But thousands of kids will marvel at the subsonic streaks across the sky, and who can blame them? (Read all of Trudeau’s remarks here.)

Trudeau didn’t dilly-dally; he had a date with the House of Commons at noon. During a question-and-answer session with Tory leader Andrew Scheer—not question period, because the House wasn’t technically sitting—the pair continued their recent habit of asking good questions and getting good answers. Scheer asked if the feds would fast-track approvals of new tests. Trudeau replied that, in fact, Health Minister Patty Hajdu had sped through additional test kits. Watch the rational, subdued exchange here—even if you might prefer a little more bravado.

The House did meet yesterday, and at 2:40 p.m. Employment Minister Carla Qualtrough introduced legislation—Bill C-15—that would unlock billions in emergency aid for students. Four hours later, the bill was adopted at all stages. The Senate will likely pass it swiftly on Friday.

What makes François Legault think Quebec is ready to re-open? As the province at the epicentre of Canada’s coronavirus outbreak readies itself to phase in regular economic activity, Patricia Treble—our in-house expert on the scope of the pandemic in Canada—wonders why the premier and his public-health officials are so confident that May 4 isn’t too early to start opening things up.

What data are the province looking at that the rest of the country isn’t? Because it certainly isn’t seeing sustained reductions in its number of new cases—one of the conditions leaders in other jurisdictions have set out for easing their own lockdowns. Quebec’s rate of increase of COVID-19 cases is staying stubbornly high at four per cent, mirroring that of Ontario. By contrast, the other provinces that are going forward with re-opening plans are posting increase rates at least half that of Quebec. New Brunswick, for instance, hasn’t had a new case since April 18.

A progressive approach to COVID-19 recovery: Former NDP leader Ed Broadbent, founder of the Broadbent Institute, joined executive director Rick Smith in calling for a five-point plan to build a better society when the pandemic finally ends—and not a return to what Canada used to call normal. “Our current health and economic crisis can be a catalyst for renewal,” they write in Maclean’s. “Or, it will be a dangerous and misleading reason to return to ‘normal’—one characterized by deep and neglectful inequality.”

The Toronto Star mined Conservative sources for the inside tale of an internal party standoff over Ontario MP Derek Sloan‘s recent questioning of Dr. Theresa Tam‘s allegiance to Canada. The Star‘s sources said fellow Ontario MPs “overwhelmingly” voted to demand Sloan apologize to Tam—and if he refused, they’d call for a vote to boot him from the party’s caucus. Sloan, for his part, denied in a new statement that he ever questioned Tam’s loyalty.

A blistering release from the Canadian Union of Postal Workers accused Foodora, and parent company Delivery Hero, of breaking Ontario labour laws. Foodora Canada announced earlier this week that it would wind down its operations, citing an inability to turn a sustainable profit. The union said the popular food-delivery service, which has seen revenue skyrocket during the pandemic, was only picking up its stakes because its workers were attempting to unionize: “Foodora may try to cut and run, but they can’t hide from their responsibilities.”

Glen Murray, once the mayor of Winnipeg and later a provincial Liberal cabinet minister in downtown Toronto, has reemerged as a Green leadership candidate.”I am deeply motivated to re-imagining a socially just Canada, where people and communities thrive because ecological wisdom informs all decisions of government, corporations, and communities,” writes Murray, on his brand-new website’s policy page.

This morning, the parliamentary budget officer publishes his latest reports, part of an ongoing quest to help Canadians make sense of all the taxpayer money they’re committing to COVID-19 emergency response measures. Watch for headlines about the cost of the Canada Emergency Wage Subsidy and Canadian Emergency Response Benefit.