‘There is a political price on each of my children’s heads,' says Alison Azer, who says she hasn't heard from her children in two months 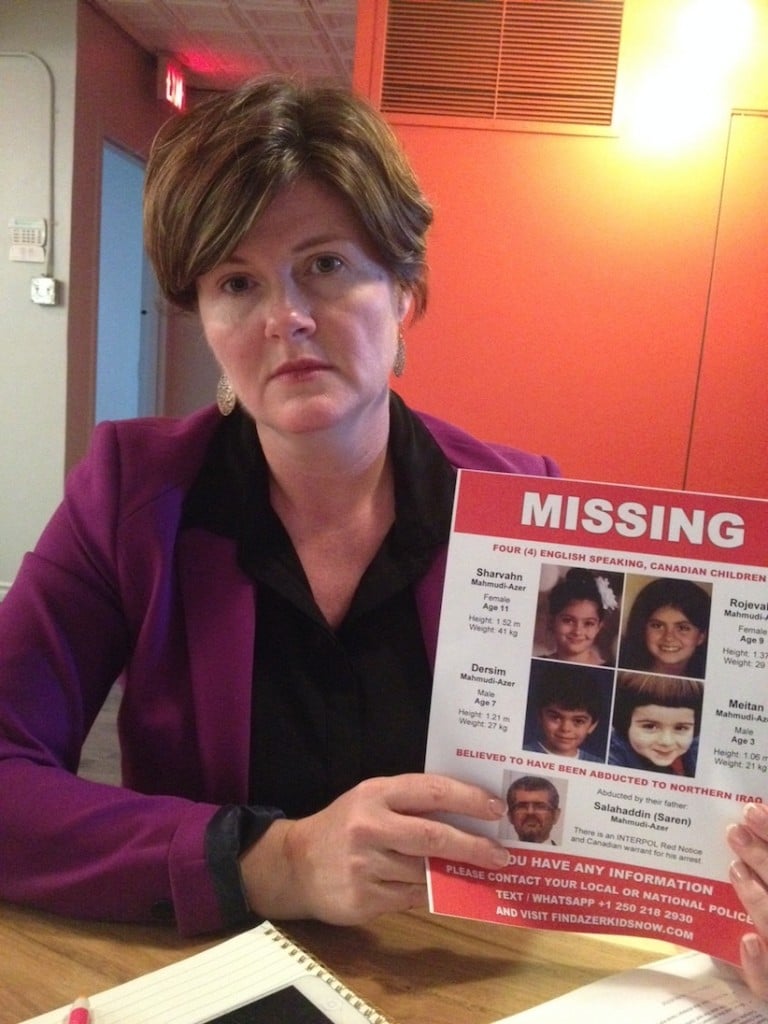 A mother of four is accusing the federal government of not doing enough to track down her children, allegedly abducted by her ex-husband and taken to the Kurdish-controlled area of Iraq.

Alison Azer, age 47, met with Foreign Affairs Parliamentary Secretary Lynne Yelich on Tuesday to ask for more help in locating her four children, whose ages range from three to 11. Since Aug. 24, there has been a nationwide RCMP warrant and an Interpol alert out for Dr. Saren Azer, who also goes by the name of Salahaddin Mahmudi-Azer.

“I don’t even know if my kids are alive,” Azer told Evan Solomon, in an exclusive interview on the SiriusXM radio program Everything Is Political. “I haven’t heard from them in two months.”

While in Canada, Azer—an activist for the Kurdish people—had ties to high-level Conservatives. Defence Minister Jason Kenney met with Azer last March and tweeted about Azer’s work, and Prime Minister Stephen Harper met with him in the spring. After the meeting on Parliament Hill, the Prime Minister’s Office featured Azer supporting military operations in Iraq in a 24/7 video produced by the PMO.

Alison Azer believes these ties to government officials, and Canada’s involvement in the conflict in Iraq, are somehow preventing them from taking prompt action.

When asked to comment on the situation, Foreign Affairs spokesperson Rachna Mishra told Everything Is Political that federal senior officials are in regular contact with Alison Azer. According to Mishra, the government “remains deeply concerned for the safety and well-being of the children. Canadian consular officials are working closely with the appropriate government authorities in Canada and abroad, including law enforcement.” She also said privacy concerns prevent the government from commenting further.

“I believed from the beginning that he would try to take them to the Middle East,” she said on Tuesday.

Since then, Azer has made two trips from her home on Vancouver Island to Ottawa to meet Minister Yelich. While Azer says Yelich has been compassionate and concerned about her children, Azer says the two-month-long manhunt by the RCMP is frustrating her.

At her first meeting with Yelich back on Sept. 9, she was told the RCMP was focusing its search in Germany. But the next day, Azer went to Washington and met with Kurdish officials. She claims they confirmed that the four children flew from Düsseldorf, Germany, and arrived in the city of Sulaymaniyah in the Kurdish region of northern Iraq on Aug. 15.

It was the first time she heard this confirmation—Canadian officials did not say anything about it—and Azer alleges the Canadian ambassador responsible for northern Iraq, Bruno Saccomani, knew about this flight but never made Foreign Affairs officials, the RCMP, or the minister aware of this critical detail.

“There are four Canadian kids who are in some desperate, dismal area in northern Iraq, the very same region that their father was pleading with the Prime Minister to help get people out of,” said Alison Azer. “That’s not right. Those children deserve more from Canada. They deserve the very same ministers that had time for their father when he was supporting their military plan. These children deserve the same attention for their release, their location, and return to Canada. They are Canadian citizens.”

Canada has growing ties to the northern region in Iraq: Harper visited the Kurdish regional capital, Irbil, in May; Canada opened a trade office in early 2014; Canadian special forces continue to train peshmerga forces in northern Iraq; and CF-18s are involved in the bombing mission against ISIS in Iraq and Syria.

Over the Thanksgiving weekend, Kenney attended a meeting of the North American Kurdish Congress in Toronto, and sat on a panel with the Kurdish representative from Washington, Bayan Sami Abdul Rahman.

Desperate for help, Azer attended the same meeting, hoping to push her case directly with the minister. “I thought, ‘What a perfect opportunity this would be for Jason Kenney to impress upon the Kurdish government how critical it is for Canada that my children be located and returned safely to their country of origin.’ ”

Kenney and Azer didn’t meet, so she followed up with a letter and, on Tuesday, the minister’s office officially turned down her request for a meeting: “On behalf of the Honourable Jason Kenney, Minister of National Defence, I would like to thank you for your email,” wrote the manager of the minister’s correspondence unit, Denis Paradis.

“The issue you raise falls under the responsibility of the Minister of State (Foreign Affairs and Consular),” Paradis said, “And consequently, I have taken the liberty of forwarding your correspondence to the Honourable Lynne Yelich.”