Four Tories have announced they will run for interim party leader, with Manitoba MP Candice Bergen the latest to put her name forward 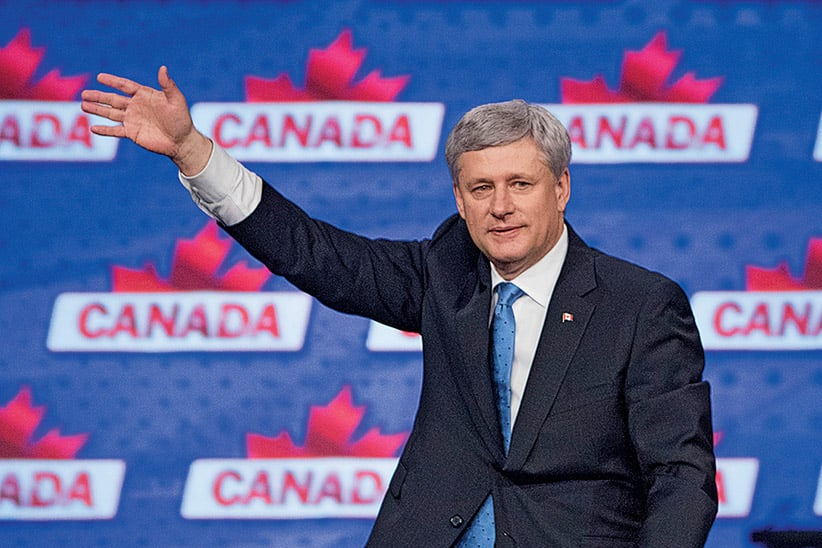 Conservative party leader Stephen Harper walks off the stage from Calgary, Alberta on Monday, October 19, 2015. Harper will resign as Leader of the Conservative Party after his government was defeated in the 2015 general election. (Photograph by Chris Bolin)

OTTAWA – Moving trucks were at 24 Sussex on Tuesday as the Harper family prepared to pack up and move to Calgary in the aftermath of the Conservative party’s defeat in last week’s election.

Prime Minister Stephen Harper has spent the last few days making calls to the dozens of Conservative MPs, including cabinet ministers, who lost their seats in the Oct. 19 vote, and telling them he accepts some responsibility for their loss, The Canadian Press has learned.

But Harper has also been saying he intends to stay on as the member of Parliament for his own riding of Calgary Heritage in part because voters elected him and in part because he feels strongly about keeping watch on his party’s future.

Whether that will include showing up for the Nov. 5 caucus meeting remains unclear.

Harper has told people he intends to be present in the House of Commons for votes but also that he wants to keep a low profile within caucus itself.

His wife and daughter Rachel will be living in Calgary, where Rachel has already been enrolled in school, while his son Ben will continue his studies at Queens University in Kingston, Ont. Where Harper himself will live while in Ottawa is unknown; while some MPs own or rent condos in downtown Ottawa, others stay at hotels when they are in the capital.

So far, four Conservative MPs have set their sights on moving into the official opposition leader’s residence at Stornoway, declaring themselves candidates for interim party leader.

On Tuesday, Manitoba Conservative Candice Bergen was the latest to put her name forward.

Bergen, who served in two junior cabinet posts, was first elected to the House of Commons in 2008.

She was also the MP responsible for shepherding the bill that ultimately killed the long-gun registry, a point of political pride for her party and an experience she said makes her well-suited for the task of rallying the battered Conservative caucus in its new role as Official Opposition.

She said the bill initially was viewed as something only extreme, right-wing men were behind, but as its champion she was able to change that perception — and her party needs a change now as well.

“Taking that bill through, changing the tone on it, it was a very difficult issue and I was able to communicate it in a reasonable way and garner a lot of support around the country and even within other party caucus members,” she said in an interview.

“I’m known to be very tough, but I’m not just fair, I’m reasonable. And I think that’s an important quality that I bring.”

Also in the running for the job — which comes with an $80,000 pay bump — are Erin O’Toole, Rob Nicholson and Diane Finley.

Defeated MPs have been invited to the Nov. 5 meeting, though many are in Ottawa this week cleaning out their offices and don’t expect to return. Those who do attend won’t have a say in the interim leadership.

It’s unclear at this point whether only members of Parliament will be able to vote or whether senators can as well. They have scheduled their own caucus meeting ahead of next week’s gathering.

The current Conservative leader in the Senate, Claude Carignan, said he believes Tory members of the Upper Chamber do get a vote.

“According to the party’s constitution, the parliamentary caucus, which includes senators, votes for interim leader,” Carignan said.

But the party’s constitution butts up against the recently-passed Reform Act, which suggests only MPs can vote for leader. MPs will have to sort that out as well at their first sit-down.

Harper has made no public comment since resigning as party leader, nor did he mention the decision to step down in his concession speech that night, leaving it to the party to issue a press release.

Multiple sources told The Canadian Press that was a deliberate choice, made because he wanted to keep the focus on his party, not himself.

— with files from Melanie Marquis.