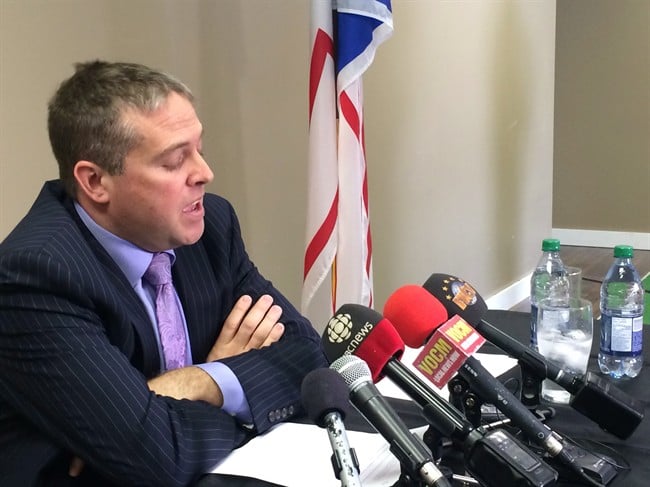 There were more questions than answers as Newfoundland MP Scott Andrews said he accepts the summary of an independent report into the allegations involving two unnamed NDP MPs. It has not been made public.

Andrews told a news conference he is not allowed to release those findings by Toronto lawyer Cynthia Petersen but would not object if Trudeau did.

Andrews then declined when asked several times to discuss the allegations that prompted his suspension from the Liberal caucus in November along with Montreal MP Massimo Pacetti. Both men have now announced they’ll sit as Independents.

While Pacetti confirmed Wednesday he won’t seek re-election, Andrews said he’ll decide in coming months whether to run as an Independent. The 40-year-old married father of two has represented the Avalon riding southwest of St. John’s since 2008.

“After a full review, I am satisfied with the contents and findings of Ms. Petersen’s executive summary,” Andrews said at his constituency office in Conception Bay South.

“I have learned a lot about myself in the past few months and particularly, how my jovial Newfoundland friendliness can be perceived. I’ve learned a great deal on the importance of personal space, diversity and the understanding of feelings of others. I have and will continue to have the greatest respect for all my female colleagues and friends inside and outside the political world.”

A federal election is scheduled for this fall.

Andrews stopped short of saying he did anything wrong. He flatly refused to confirm or deny what sources familiar with the allegations have told The Canadian Press, that he followed an NDP MP home after a social event, forced his way through her door, pushed her against a wall, groped her and ground his pelvis against her. The sources say she says she ordered him to leave and he did.

The woman further alleged that Andrews subsequently called her a “c–kteaser,” among other things, according to the sources.

“I’ve witnessed the worst side of politics in the last 24 hours, in the last six months,” Andrews said Thursday.

Trudeau issued a statement after the Andrews news conference saying he also accepts the findings of Petersen’s review and the decisions by Andrews and Pacetti to sit as Independent MPs.

“As such, I consider this matter closed,” Trudeau said.

Related: A Maclean’s multi-party panel on women in politics

He suspended Andrews and Pacetti from the caucus after a female New Democrat complained directly to him that Pacetti had allegedly had sex with her without her explicit consent. She also told Trudeau that another female NDP MP had allegedly been sexually harassed by Andrews.

Both Pacetti and Andrews have repeatedly denied any misconduct since the allegations surfaced last fall, exposing a lack of formal procedures to investigate such complaints between MPs. Their move to leave the Liberal caucus avoids forcing Trudeau’s hand, and having to justify expelling them.

Andrews declined to comment Thursday when asked if there was anything he regretted or would have done differently.

“I’m not going to respond to any of that because I don’t want to be mean-spirited and get into the details.”

In Vancouver, NDP Leader Tom Mulcair said he hopes the two NDP MPs will now be able to leave the episode behind.

“I’ve been offering support and will continue to do so to the two complainants and I’m going to hope that they will be able to do exactly as they wish, which is to move on from this.”

Christopher Dunn, a political scientist at Memorial University of Newfoundland, said moving on may not be so easy for Andrews. The impression left is that if he accepts the Petersen findings then there must be some reason for his dismissal, he said.

“I think it sounds the death knell for his political chances.”