'Hello President Xi, this is Justin Trudeau from Canada.' *click* 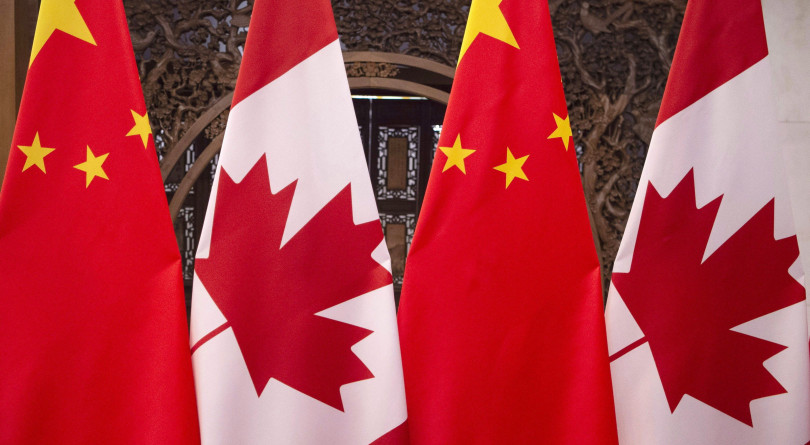 Flags of Canada and China are seen prior to a meeting of Canadian Prime Minister Justin Trudeau and Chinese President Xi Jinping at the Diaoyutai State Guesthouse in Beijing on Dec. 5, 2017. (Fred Dufour/CP/AP)

Canada is stepping up its campaign for Beijing to release two Canadians “arbitrarily” detained and charged with espionage in China—Michael Kovrig and Michael Spavor.

Like talking to a Great Wall: Foreign Minister Chrystia Freeland dispatched a delegation of MPs to China, led by her parliamentary secretary, Toronto MP Rob Oliphant, to make the case directly to Chinese officials that the two men should be released. The parliamentarians, from the Canada-China Legislative Association, are scheduled to be in China until May 25. What isn’t at all clear is whether anyone with anyone with authority will even meet with them. Freeland admitted she’s tried and failed repeatedly to get a meeting with her counterpart, while Prime Minister Justin Trudeau has been unable to get the ear of Chinese President Xi Jinping. “The Chinese practice seems to be to avoid, in the early stages of these kinds of standoffs, to avoid higher-level meetings,” said Freeland. (CBC News)

For his part, Canada’s former ambassador to China, Guy Saint-Jacques sees little chance anyone from Canada will be listened to: “Nobody in the Chinese government wants to meet with a Canadian minister or special envoy—even if the prime minister were to phone [Chinese] President Xi Jinping, he would not take the call.” (Global News)

Basically bullies: Back in Canada Trudeau is less enamoured with China’s “basic dictatorship” these days. In some of his toughest language since the Canada-China chill began, he said democracies around the world should not lie down and accept China’s aggressive ways: “China is making stronger moves than it has before to try and get its own way on the world stage. Western countries and democracies around the world are pulling together to point out that this is not something we need to continue to allow.” (Global News)

Chamber change-up: Last week independent Senator Paula Simons, a member of the transportation and communications committee studying the Trudeau government’s tanker ban bill, cast the deciding vote that recommended against proceeding with the bill. Writing in Maclean’s, the senator from Alberta, who Trudeau appointed last fall, explains why she voted the way she did, and what a muscular independent upper house could hold in store for Canada:

Thanks to alphabetical order, I was the last senator to vote, which heightened the melodrama. And the shock. The cognitive dissonance was so extreme, conservative keyboard warriors went on excoriating me for days on Twitter, accusing me of being a shameless shill who sold out my province, accusing me of hating Alberta. They just couldn’t wrap their heads around the fact that I’d voted against the bill they loathed. Neither could those who had confidently expected me to vote for C-48—among them, many of my Independent colleagues. (Maclean’s)

Integration: Syrian refugees who fled to Canada after the outbreak of civil war were forced to overcome serious language and employment barriers. But nearly four years after the influx of refugees became the defining issue of the 2015 federal election, how are the 50,000 Syrians who came to Canada since then faring today? Writing in the June issue of Maclean’s, Peter Shawn Taylor examines the stories and statistics of those refugees and finds the early fears about how thousands of new families would cope were misplaced. (Maclean’s)

Out of the running: Independent Saskatchewan MP Erin Weir said he was approached by “some other party leaders and other MPs” about running for them in this fall’s election, but in the end he’s decided now to seek re-election. Jagmeet Singh booted Weir from the NDP caucus after a third-party investigation backed up allegations of harassment and sexual harassment, though Weir has always said the allegations were unfounded. He decided not to run for a rival party, he said, because “my candidacy under another banner this year would not help to maintain progressive representation” for Saskatchewan in Ottawa. (CTV News)

Maxime Bernier‘s latest candidate for his People’s Party wants you to know a few things—9/11 was an inside job, pizza gate was a way to mask the real Clinton pedophile ring and poor Donald Trump is a victim of the ‘deep state’. Ken Pereira, who was a star witness in the Quebec corruption inquiry of a few years back, will be Bernier’s man in Portneuf–Jacques-Cartier, the riding northwest of Quebec City. (CBC News)