Mulcair, in with a chance

Rachel Notley’s sweep has reminded us, as one pollster says, 'there’s an alternative to the alternative'. Suddenly, the NDP has a shot. 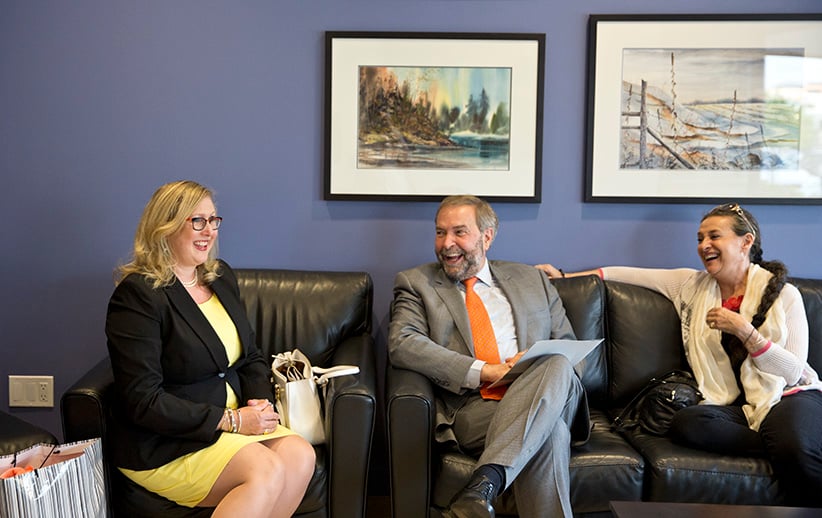 The NDP first approached Diane Freeman late last year to ask the three-term city councillor in Waterloo, Ont., to run for them in the coming federal election. “I said, ‘No, I’m a card-carrying Liberal,’ ” Freeman says. “But I promised that I would think about it, and I did.” By early this year, she was intrigued enough that, when NDP Leader Thomas Mulcair called her, she asked to meet him. Not only did Mulcair agree, he arranged to introduce her to top members of his campaign team when the civil engineer was next in Ottawa. That made an impression. So did Mulcair’s way with his office Nespresso machine. “The first thing he did was offer me a cup of coffee,” Freeman says, “and then he made it himself.”

She switched parties and was acclaimed late last month as the NDP candidate in the Conservative-held Waterloo riding. Mulcair made a point of being on hand for her nomination bash. It’s the sort of event NDP strategists take pains to note as evidence they are picking up support from Justin Trudeau’s Liberals. While Freeman was clearly won over partly by Mulcair’s attention, she also talks policy. As the founder of a not-for-profit daycare, she liked Mulcair’s promise, announced last fall, to spend $1.9 billion a year to help pay for 370,000 new child care spaces by 2018-19. And she was drawn by Mulcair’s staunch opposition to Bill C-51, the government’s controversial Anti-Terrorism Act, which the Liberals voted for, although Trudeau has pledged to amend the law if he becomes prime minister.

Isolated stories such as Freeman’s wouldn’t resonate much if they weren’t supported by trends in opinion polls. Back when Mulcair was courting her early this past winter, the NDP seemed stuck several points behind Trudeau’s Liberals and Stephen Harper’s Tories in most voter-opinion surveys. The conventional wisdom held that the election—set for Oct. 19 under the federal fixed-voting-date law—would be a contest between Harper and Trudeau. By this week, though, the three parties were locked in a dead heat. According to the polling firm Ipsos, the NDP’s national support stood at 30 per cent in a poll conducted at the end of May, up five percentage points from early April. During the same period, the Tories dropped four points to 31 per cent, while the Liberals also stood at 31 per cent, down two points.

Mulcair’s fortunes seemed to turn early last month. In Alberta’s election on May 5, Rachel Notley’s NDP swept to power, ending 44 years of provincial Tory rule. Pollster David Coletto of the Ottawa firm Abacus Data says many voters had assumed Trudeau was the only viable alternative to Harper—until Notley’s majority win delivered an emphatic reminder that strange things can happen in elections. “The Alberta election put the federal NDP back on the map, in the sense that people remembered there’s an alternative to the alternative,” Coletto says.

NDP strategists don’t deny they’ve benefited from a Notley bounce, but they insist that months of concerted effort to reposition Mulcair made it possible for them to capitalize on that opportunity. Early this year, Mulcair shook up his office. He brought in a new chief of staff, Alain Gaul, a Montreal lawyer who had served Mulcair in the same key role, back when he was a Quebec Liberal cabinet minister, before his jump to the federal NDP in 2007. Mulcair also reached out to Brad Lavigne, who was the late Jack Layton’s national campaign director in the NDP’s breakthrough 2011 election run.

Lavigne, who had been working for the consulting firm Hill & Knowlton Strategies, returned to the NDP fold for a few months as a volunteer, before moving back to the party’s national headquarters this week as a full-time senior campaign adviser. Mulcair’s revamped brain trust devised a strategy that emphasized the need for him to travel more outside Ottawa, and talk more often about his own “middle-class upbringing,” notably, repeating the memorable detail that he grew up the second-oldest of 10 children.

Why the emphasis on his childhood? One NDP strategist said the party’s research showed that Mulcair’s image has been shaped, in the minds of most Canadians, by his performance in the House, especially his grilling of Harper in question period over the Mike Duffy affair. While voters tended to respect Mulcair’s prosecutorial zeal, their impression of him as an individual beyond the partisan fray was vague. Interestingly, that can be seen as the reverse of Trudeau’s situation. The latter is widely seen as a likeable, fresh persona away from the Hill, but who’s lacking a strongly defined image as a combatant when he squares off against Harper.

With polls now showing the parties so tightly clustered in declared voting intentions, analysts are probing deeper into the data for clues about where voters might be heading next. In poll results out this week, Abacus reports a five-point increase over the past month alone in the number of Canadians who say they would consider voting NDP, to 56 per cent. That’s better than the 51 per cent who say they would consider voting Liberal and the 45 per cent who would contemplate casting a ballot for the Conservatives. Abacus Data’s Coletto says that strongly suggests some traditional Liberals must have been prompted by the extensive Alberta election coverage to reconsider the NDP as an option. 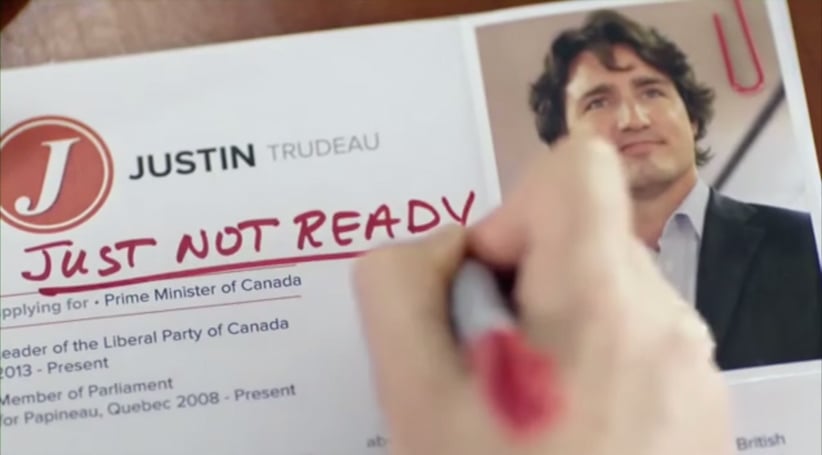 Under the radar: While the Liberals and Tories attack each other (above and below), the NDP has been ignored. (PC Party of Canada/YouTube) 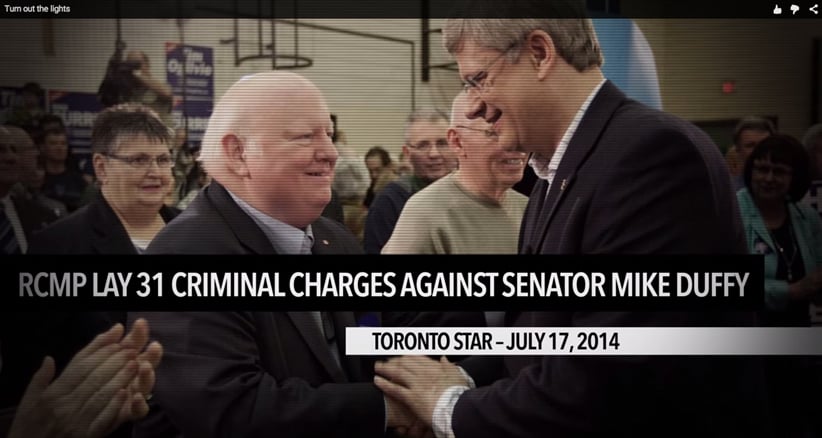 But not everyone sees the public opinion landscape as so promising for Mulcair. Pollster John Wright of Ipsos points to regional numbers that suggest the NDP’s support is not growing where it needs to most—in Ontario, especially the hotly contested belt of ridings in the suburbs around Toronto. Ipsos pegs NDP support in Ontario at just 24 per cent, which would mean the real contest there is still between the Conservatives, at 36 per cent in the province, and the Liberals, virtually tied at 35 per cent. The NDP’s national support rests disproportionately on Mulcair’s strong lead in his home province. In Quebec, Ipsos’s most recent poll has the NDP far out in front with 41 per cent, while the Liberals trail with 25 per cent, the Bloc Québécois has 20 per cent, and the Conservatives a mere 11 per cent. Outside Quebec, Wright says, opinion “may be more favourable toward the NDP, but there’s been no voting change.”

If Ontario remains the province where the NDP most needs to make up ground, no wonder Mulcair was courting Freeman. He has to hope she turns out to be an opinion leader rather than a mere outlier.

There are at least a few others like her. In the Tory-stronghold riding of Lanark-Frontenac-Kingston, just west of Ottawa, the mayor of Perth, Ont., also jumped from the Liberals to the NDP to secure a federal nomination. John Fenik said his “tipping point” came after Trudeau’s decision to have his Liberal MPs vote for the Anti-Terrorism Act, which happened to pass in the House on May 6, the day after Notley’s triumph. “Justin Trudeau is an amazing speaker,” Fenik says. “But there’s no depth on policy.”

Signs of the NDP being back in the thick of things have come so fast that Conservative strategy doesn’t seem to have kept pace. The Tories’ latest TV attack ad takes direct aim at Trudeau, ignoring Mulcair. Similarly, a group called Working Canadians, headed by former Canadian Federation of Independent Business president Catherine Swift, and funded mainly by donations from business owners, is airing radio ads attacking Trudeau’s “high-tax, big-government agenda,” but not taking aim at Mulcair—at least, not yet. Until recently, Working Canadians wasn’t sure Mulcair was “a serious player,” Swift says. For now, her group is taking stock. “Who knows if this is enduring support for Tom?” she says of the NDP’s recent uptick.

Insiders are pondering two questions, as they try to assess the durability of the NDP’s revival: How long will Notley’s win pay dividends to Mulcair? And how much will supporting Bill C-51 hurt Trudeau’s standing among progressives? Liberals have little control over the first variable. Regarding the second, though, Trudeau will try to shift attention to other files, such as his “Canada Child Benefit” proposal and, likely later this month, new democratic-reform policies. Naturally, he won’t have the field to himself. Mulcair is scheduled to deliver a major economic policy speech in Toronto in mid-June, followed by a rally in Ottawa the next day. Nobody will be surprised to find him campaigning in Ontario.