The Liberals have been hit with a challenge that never fit into their plan. As talks begin this week, the stakes are enormous. 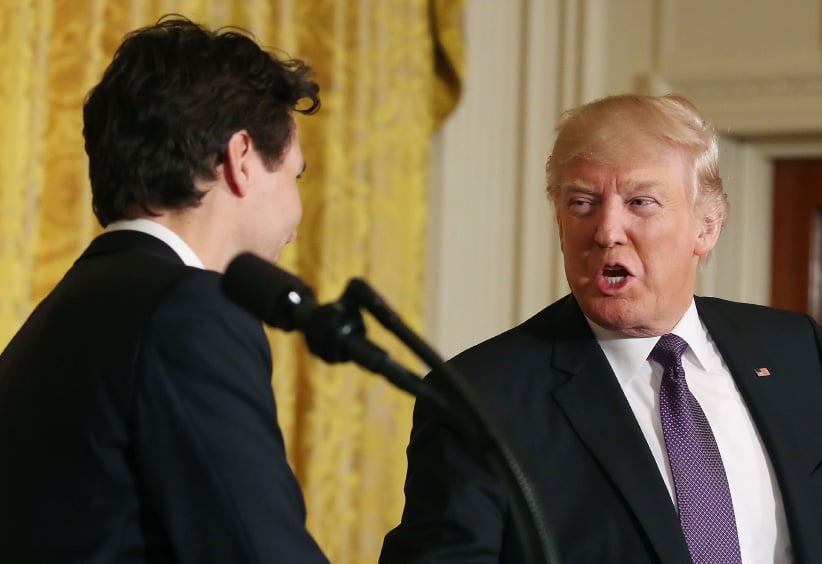 The start of North American Free Trade Agreement (NAFTA) talks this week—negotiations foisted on Canada and Mexico by U.S. President Donald Trump—provides a moment to marvel at how trade has emerged, unexpectedly, as a defining issue for Prime Minister Justin Trudeau’s still-young Liberal government.

In the 2015 election, Trudeau ran on an economic platform that touted deficit-financed infrastructure spending and a boost in federal benefits for families with kids. Trade only briefly popped up as a live issue when the Trans-Pacific Partnership was finalized late in the campaign, and Trudeau said that while Liberals “strongly supported” free trade in general, they would have to “thoroughly examine” the 12-nation TPP’s particulars.

That desultory bit of hedging was a faint, final echo of free trade’s bygone status as a litmus test of the Liberal-Conservative divide. The issue looked definitive, of course, way back when Brian Mulroney’s Conservatives beat John Turner’s Liberals in the epic 1988 election—the campaign so bitterly fought over the trade deal with the U.S. that Mulroney secured at great political risk.

But that’s history. When Mulroney showed up to brief the Liberal cabinet a few months ago on how to renegotiate NAFTA—the 1994 successor to his Canada-U.S. deal that brought Mexico into the continental economic club—Liberals didn’t flinch. Polls tell us why Trudeau could seek Mulroney’s counsel with impunity: A recent Pew Research survey found an almost identical 82 per cent of Liberals and 83 per cent of Conservatives in Canada support NAFTA, compared with 68 per cent of Democrats and just 30 per cent of Republicans in the U.S.

The public opinion consensus in Canada has turned free trade into a can’t-lose cause to champion in Ottawa. Last fall, the tenacity then-trade minister Chrystia Freeland displayed in sealing the deal on the Canada-European Union Comprehensive Economic and Trade Agreement (CETA) cemented her status as one of the few undisputed rising stars in Trudeau’s cabinet. The PM promoted her to Foreign Minister early this year, conspicuously leaving her in charge of Canada-U.S. trade—a daunting defensive challenge after NAFTA-bashing, TPP-nixing Trump won the presidency.

Presiding over the file offers Freeland a plum chance to strategically bind together two politically promising themes. Safeguarding Canada’s NAFTA-assured access to U.S. markets is—as that Pew poll confirms—a pragmatic priority most Canadians back. Countering Trump’s retrograde “America First” rhetoric about NAFTA appeals to loftier principles, the kind Freeland venerated in her major speech to the House on June 6 about Canada’s steadfast commitment, in the Trump era, to the postwar international order. “The system,” Freeland said, “had at its heart the core notions of territorial integrity, human rights, democracy, respect for the rule of law, and an aspiration to free and friendly trade.”

Fitting NAFTA into that aspirational, elevated, internationalist, decidedly un-Trumpian frame conforms better with the self-image of Liberals, and many other Canadians, than the more familiar positioning of free trade as a priority of corporate lobbyists. Still, there’s that, too. The business-oriented C. D. Howe Institute flags three specific, stated Trump goals (plus his sweeping aim of somehow adapting NAFTA to shrink the U.S. trade deficit)  that the Canadian negotiating team must “strongly resist”:

The danger of failing to hold the line on any of these three big issues has to be deeply worrisome for Freeland, and there are many other dicey issues on the table. So many, in fact, that experts in trade negotiations doubt the talks can be finished in the rushed timetable Trump’s team has proposed—just seven bargaining sessions, starting April 16 in Washington, aiming to wrap talks up with a revised NAFTA by the end of the year.

MORE: Why Canada needs to fight for Chapter 19

Daniel Schwanen, the Toronto-based C. D. Howe Institute’s resident expert on trade and international policy, says one possibility is that negotiators will quickly prioritize a short list of topics truly up for serious discussion. He theorized that Trump has so loudly vowed to get a big win out of changing NAFTA—or just scrap the pact—that Canada and Mexico must be contemplating what they might give up to allow him to claim to have fulfilled his promise.

“It would be best for all three countries if we do this quickly,” Schwanen said in an interview, speculating that negotiators might aim for a result “where Canada and Mexico can say they’ve avoided the worst, and the U.S. can say we’ve gained some protection against unfair competition and gained some access.”

The stakes are enormous. Since the deal came into force in 1994, trade among the three NAFTA countries has roughly tripled to more than US$1 trillion. Of course, it’s impossible to be precise about how much of that rise can be attributed directly to NAFTA. And the deal hasn’t achieved everything originally hoped. For instance, as the Canadian Centre for Policy Alternatives points out, Canadian manufacturing productivity still stubbornly trails U.S. levels, despite upbeat predictions at the outset that NAFTA-spurred economic integration would close the gap.

MORE: Inside the massive effort to woo the U.S. on NAFTA

But Trudeau’s ability to assemble a remarkably broad coalition to help him out on NAFTA shows how widely the deal has come to be seen as essential to guaranteeing that Canadian goods and services aren’t unduly impeded from entry into the hugely lucrative U.S. market. His newly appointed NAFTA Council includes not just prominent Tories and New Democrats, but also top union and farming voices, along with the expected business leaders from banking, auto parts, entertainment, high tech and more.

And the council only augments the zone-flooding effort Trudeau has orchestrated over the past few months to win over American allies all over the U.S. (That campaign, as Maclean’s detailed in this story, enlisted 17 cabinet ministers, 12 premiers and 13 diplomats.) No matter how the talks end, nobody will seriously be able to fault Trudeau for failing to cover his bases.

The outcomes of the talks that begin this week are as unpredictable as the president who demanded them. In Canada, though, this much is already clear: Confronted with a challenge that hardly figured in their plan for getting elected, Trudeau and his strategists have displayed an ability to react—marshalling resources, assembling a coalition, even creating a cabinet heavyweight—that cannot be denied. Now all that’s left is the hard bargaining.