NDP back a national referendum on electoral reform 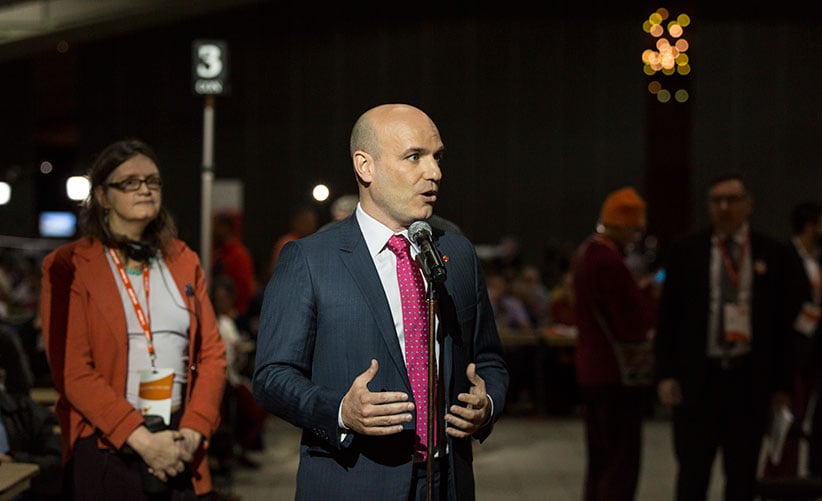 OTTAWA – New Democrats have dropped their opposition to holding a national referendum on electoral reform in a bid to pressure the governing Liberals into agreeing to a proportional voting system.

The move Wednesday was aimed at forging a united front in favour of proportional representation among opposition parties, who hold the majority on an all-party committee that is supposed to recommend an alternative to Canada’s first-past-the-post voting system by Dec. 1.

Committee members have been holed up behind closed doors this week, attempting to reach a consensus which has so far proved elusive.

NDP, Bloc Quebecois and Green members of the committee support a proportional voting system but Conservatives have said they will not support any change unless it is approved by Canadians in a referendum. The Bloc also wants a referendum.

Conservative democratic reform critic Scott Reid was not immediately available for comment. But NDP counterpart Nathan Cullen said he’s had “good” conversations with Reid thus far about the NDP’s willingness to make a concession on the referendum idea.

Asked if it will be enough to win Tory support for proportional representation, Cullen said Reid has acknowledged that the majority of experts and average folks consulted by the committee overwhelmingly favour a proportional voting system.

“I can’t see us writing a report that doesn’t reflect that back,” he said.

MORE: A breakdown of the current electoral system and the options on the table

Liberal committee members have not yet tipped their hand on what voting system they prefer. But Prime Minister Justin Trudeau — who promised during the 2015 federal election campaign that it would be the last conducted under first-past-the-post — has in the past expressed a preference for a ranked ballot system, a model opposition parties maintain would disproportionately benefit the Liberals.

The NDP is now attempting to force the Liberals’ hand.

“It would be strange if we had a scenario in which the opposition parties were able to make concessions and come to an agreement to help the Liberals fulfil their campaign promise, their throne speech commitment, and have the Liberals opposed to that,” Cullen said.

MORE: From our Trudeau Report Card, how electoral reform is coming one year in

Democratic Institutions Minister Maryam Monsef’s office had no comment on the NDP move, other than to say she looks forward to the committee’s report. She has repeatedly said she’s not a fan of holding a referendum, which could be divisive and costly, but that she’d have to take the idea seriously if the committee recommends it.

Among the problems with holding a referendum is the tight time frame in which electoral reform must take place to deliver on Trudeau’s promise. Chief electoral officer Marc Mayrand has said legislation implementing a new voting system must be in place by June if Elections Canada is to have the system up and running in time for the next election in October 2019.

Cullen acknowledged that the Referendum Act would have to be amended before a vote could be held, to impose spending limits on campaigners, among other things. And more time could be lost negotiating all-party agreement on the question to be put to Canadians and the threshold of support — not just Canada-wide but also regionally — that would be required to approve a change.

Still, Cullen said he believes Elections Canada could “begin the work” as soon as a new system is proposed by the committee, even before it’s put to a referendum or legislation is passed.

The NDP would like the referendum to be modelled on the recent electoral reform plebiscite in Prince Edward Island, which gave Islanders five different options and asked them to rank their choices on a preferential ballot. Ultimately, 52 per cent voted for a mixed member proportional system, a result arrived at after four rounds of voting.

Just 36 per cent of eligible voters cast ballots, prompting Premier Wade MacLauchlan to question the legitimacy of the choice.