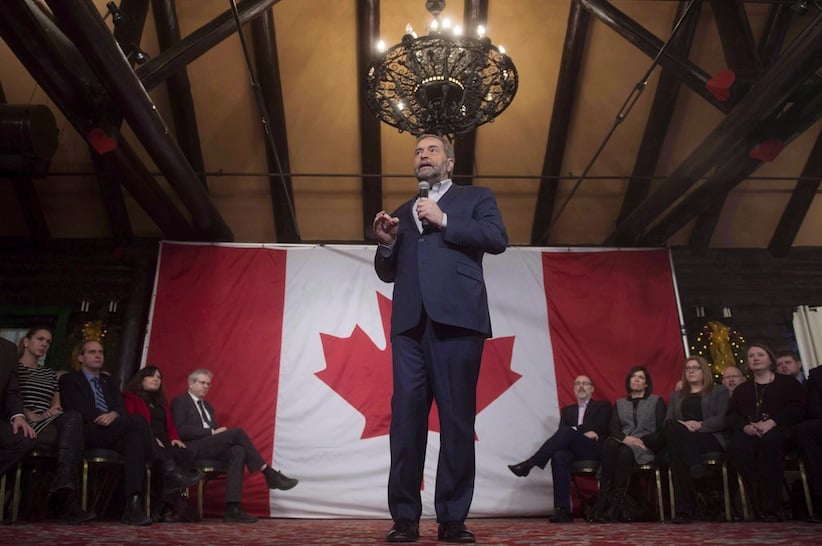 Leader Tom Mulcair speaks to the NDP caucus during a retreat in Montebello, Que., on January 19, 2016. Five union leaders are expressing support for Tom Mulcair ahead of next month’s NDP convention in Edmonton, where party members will decide if he should remain at the helm of the party. THE CANADIAN PRESS/Adrian Wyld

MONTREAL – NDP Leader Tom Mulcair is suggesting a 70 per cent result at his leadership review would enable him to stay on.

Asked on Tuesday about comments by Canadian Labour Congress president Hassan Yussuff, who said the NDP leader will get less than 60 per cent Sunday, Mulcair told The Canadian Press, “Since the beginning of this whole exercise, I’ve known what the vote is about.

“I know as leader that I must enjoy good support. And the kind of number evoked by (party president) Rebecca Blaikie (70 per cent) is the kind of number I have felt across the country. As you have just said, there are other people who have other numbers.”

The NDP’s constitution calls for a secret ballot at the convention, which begins Friday in Edmonton. If more than 50 per cent of the ballots call for new leadership, a vote must be held within a year.

Mulcair said he will “continue to work tirelessly until Sunday in order to have the best possible result.”

Related: Tom Mulcair prepares for his own leadership review

In an email sent to The Canadian Press after the interview, the NDP leader said he has always refused, as a matter of principle, to provide a specific number.

“What I am asking New Democrats for is a strong endorsement so that we leave the convention united in our fight for a more equal Canada,” the email read.

Mulcair has gained the support of Canada’s main trade unions but not from Yussuff, who maintains the party needs a new leader.

Yussuff told The Canadian Press he met with Mulcair about three weeks ago and told him: “Absolutely I’m not supporting you.”

“The election was a devastating loss and I don’t really understand what (Mulcair) will offer from what I heard so far,” he said. “All I’ve heard him say is that he takes responsibility for what happened and he never elaborates.”

The NDP had 95 seats going into last year’s election and ended up winning 44.

Former New Democrat MP Peggy Nash, who lost her Toronto seat in the October election, has also blasted the campaign performance in a column in Tuesday’s Huffington Post.

“Many have commented on the failure of the Leader to answer questions on the opening day of the campaign, the failure to debate unless the PM was present, and generally the failure to inspire Canadians. I agree,” Nash wrote. “There was no coherent message, no optimism, no passion.”

Nash says she’ll wait to hear what Mulcair has to offer in Edmonton before deciding whether to support his leadership — but adds he has to change his approach.

“He’s had six months to reflect on the events of the 2015 campaign,” she said. “I hope he throws away talking points and speaks from the heart. I hope he shows us the passion that was so lacking in the federal campaign, and that he inspires us with a vision of a better Canada and a plan to rebuild.

“Canada needs the NDP to build a truly progressive, sustainable, inclusive and fair Canada. The NDP urgently needs the leader who can get us there.”

Later on Tuesday Mulcair gave a speech to delegates at the national conference of the United Steelworkers Union in Montreal.

He told reporters after his speech that he was “proud to receive the support of the five major trade unions” and dismissed Yussuff’s criticisms.

“It’s the support of the unions and their members that’s most important for me and as for individuals who may have another opinion, that’s part of a healthy democratic debate,” he said.

Mulcair received support from five union leaders at the end of March.

Jerry Dias, the head of Unifor, has also recently come out in favour of Mulcair.

Standing next to the NDP leader on Tuesday was steelworkers national director, Ken Neumann, who reinforced his support for Mulcair.

“Tom no doubt has the backing of the trade union movement and he is worthy of it,” Neumann said.

Neumann added that several hundred trade union members will be at the weekend convention and while they can’t be forced to vote for Mulcair, all have pledged to do so.