NDP only party with courage to stand up to Harper on TPP, Mulcair says

'The NDP, when we form government on Oct. 19, will not be bound by this secret agreement' 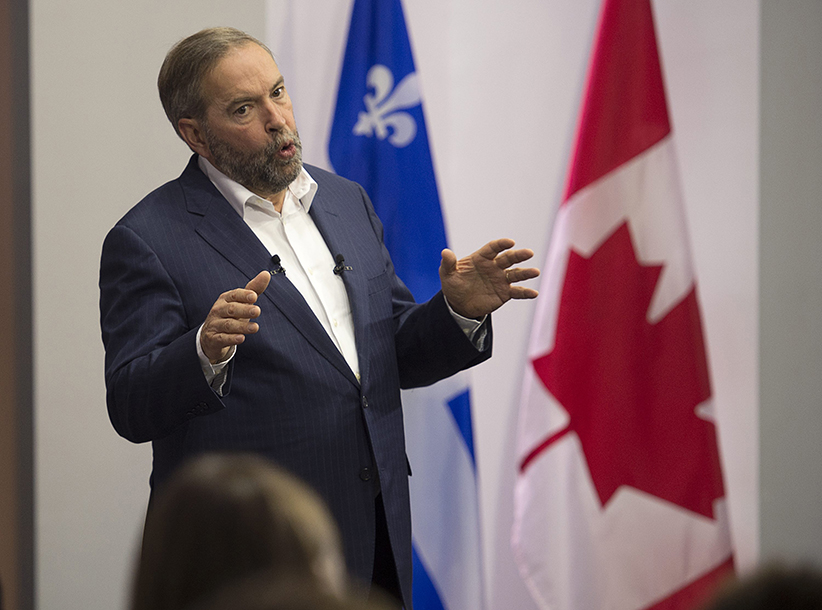 BRANTFORD, Ont. — The NDP is the only party with the backbone to stand up to the Conservatives and walk away from the Trans-Pacific Partnership, leader Tom Mulcair said Sunday as efforts to conclude the trade agreement continued well into overtime.

On one of his most active campaign days to date, Mulcair blitzed six different ridings in southwestern Ontario, all of which went to the Tories in the 2011 election.

But the Liberals were in Mulcair’s sights too.

In particular, he seized on comments Saturday by Ottawa Liberal candidate Catherine McKenna, who was unwilling to follow the NDP’s lead and declare that a Justin Trudeau government would not feel obliged to support the deal.

“They were saying that they had no choice but to back Stephen Harper’s secretly negotiated deal for the Trans-Pacific Partnership,” Mulcair said in Brantford, Ont., his first stop of the day.

“The NDP, when we form government on Oct. 19, will not be bound by this secret agreement that Mr. Harper has been negotiating.”

Mulcair later spoke in front of about 300 people during a quick visit to Waterloo, Ont., where he implored the crowd to keep in mind what the massive 12-country Pacific Rim trade deal, once fully realized, could end up doing to the region’s farmers.

Dairy producers in particular are concerned that the country’s supply management system, which restricts imports and limits production, could be on the chopping block.

“Think about the family that’s been running that dairy farm for generations,” he said.

As the day wore on and the prospects of an announcement grew more and more unlikely, Mulcair turned to chastising the Harper Conservatives for failing to clinch a trade deal during a day of on-again, off-again news conferences.

“All day long, Stephen Harper’s been playing ‘Let’s Make A Deal,”’ Mulcair said to laughter from hundreds of supporters in Essex, near Windsor, Ont.

“Looks like his secret deal is so secret, he can’t even find it himself.”

Mulcair, who has been dealing with persistent talk of dwindling support for his party in all-important Quebec, doubled down on what’s sure to be his core message in the final two weeks of the campaign: voters hungry for change have only one real choice.

“Hold on. This time, for the first time in our history, there’s hope. We can get real change.”

What’s more, he added, Harper failed Ontario’s agricultural and industrial heartland long before the TPP, which many in the manufacturing sector also fear will include major auto sector concessions.

Mulcair has repeatedly accused the Conservatives of enacting policies that cost 400,000 manufacturing jobs since the recession in 2008, including 43,000 in Canada’s auto industry.

His campaign also included a stop in Stratford, Ont., at the campaign headquarters of NDP candidate Ethan Rabidoux, who is running to represent the Perth-Wellington riding.

A school bus parked across the street from the event didn’t go unnoticed by Mulcair. The bus was there to pick up local Liberal supporters for what the party was billing as a huge rally for Justin Trudeau later in the day in Brampton, near Toronto.

“The way to show support for the people in Stratford is to show up in Stratford,” Mulcair quipped before his campaign headed to London, Sarnia and Essex.

The NDP issued a handout that listed all the communities that Mulcair is visiting, with highlights beside each one showing the number of manufacturing jobs that the party says the communities have lost since the Conservatives came to power.

All six of the ridings Mulcair visited Sunday, while also held by the Conservatives, saw the NDP finish second in 2011.