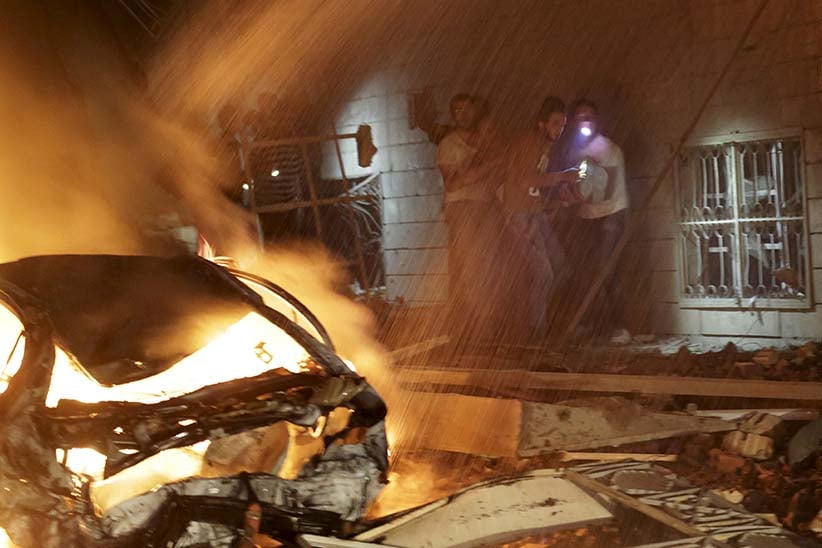 The work of Bashar al-Assad: Men carry an injured civilian after a bombing in Maaret al-Naaman, Syria. (Khalil Ashawi/Reuters)

The leader of the New Brunswick New Democratic Party has founded an organization that is urging Canada to lead a campaign to halt the bombardment of civilian areas in Syria and create safe zones and humanitarian corridors there—by imposing no-fly zones, if necessary.

Such a measure would result in Canada expanding its military campaign in Syria and Iraq—which now targets the so-called Islamic State jihadist group—to the planes, helicopters and air defences of Syrian dictator Bashar al-Assad.

Dominic Cardy this week launched “Canadians for Peace in Syria” and a petition calling for the full implementation of United Nations Security Resolution 2139, which demands that all parties in the war cease attacks against civilians, as well as the indiscriminate use in populated areas of weapons such as barrel bombs. The resolution also demands, among other things, the unimpeded delivery of medical and humanitarian assistance to those in need.

Related: What kind of force for global peace does the NDP want to be?

Cardy supports Canada’s participation in the bombing campaign against Islamic State—a position that puts him squarely in opposition to the federal NDP led by Tom Mulcair, which is campaigning on a pledge to end Canada’s involvement in the war. But Cardy believes the mission is too narrow and ignores the biggest source of misery in Syria.

“We’ve got to look at why those refugees are leaving their country. It’s because they’re being bombed incessantly by a regime that’s responsible for well over 90 per cent of the deaths in this conflict, far more than ISIS, or any of the other groups,” he says, referring to Islamic State by an acronym.

“Absolutely, ISIS is a problem, but ISIS is a creature of the collapse of the Syrian government and its legitimacy. So we should be going after the real problem, which is the government of Bashar al-Assad bombing its civilians on a constant basis for four years.”

Related: A refugee crisis is only half the story in Syria

But Cardy says all Canadian political parties have responded inadequately to the war and humanitarian disaster in Syria. He hopes a campaign focused on protecting civilians—using force only if necessary—might unite them.

Cardy says his interventionist stance on Syria, in contrast to Mulcair’s opposition to the use of Canadian military force there, reflects a division that runs through the NDP and other centre-left parties around the world.

Some on the left believe foreign policy should be built on pacifism, he says. Others believe ideals of universal solidarity come with obligations to act on them.

“I think the responsibility for a left-wing party is to stand up strongly and firmly and say that, yes, as Canadians, we recognize that we are all members of the human race, and we all have responsibilities toward each other—which isn’t just trying to pick up the pieces after people have been displaced in the millions from a civil war that we could have stopped from becoming much worse a long time ago,” he says.

“Of course, you can’t go and fix every single problem in the world. But here is a case where we have millions and millions of people who are being displaced. And this is causing problems across a wide range of countries. So if there was ever a time that we should be looking at intervening in a positive way, it would seem to be this one.”