There's so much we might learn when the PM's ex-chief of staff testifies at #DuffyTrial. Nick Köhler digs in. 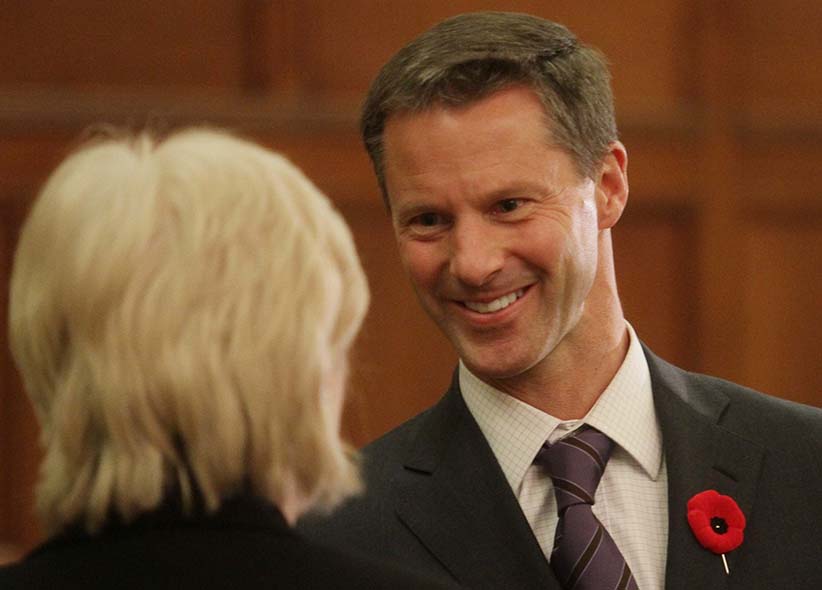 Sgt. Greg Horton, lead investigator in the RCMP’s case against Mike Duffy, is, for the most part, a mild-mannered guy, well-dressed, and he keeps his hair cropped close at the sides. He is as voracious a news reader as the reporters who sit behind him in Courtroom 33 and, in his off-hand, aw-shucks sort of way, can talk to you about almost anything: current events, his unusual taste in music, or amusing, self-deprecating stories he’d likely prefer not to see repeated here.

It’s not hard to guess how Horton gets people talking: It’s his chuckle, which is quietly conspiratorial, and which crops up throughout the transcripts of interviews he conducted for the Duffy case, and that now form part of the public record.

“G. Horton: [Laughing],” is how the stenographer records it and, in the transcripts, that laugh is sometimes the only question Horton ever needs to put to the officials he talks to about the Duffy matter, how it evolved within the stony confines of the Senate of Canada.

“‘Kay,” Horton tells Gary O’Brien, then clerk of the Senate, on Sept. 18, 2013, after O’Brien was done with his yarn. “That’s a very good story. Um [laughing], it’s better than anybody else gave. You usually have to ask a bunch of questions along the way.”

That good-humoured demeanour belies a career that, over the last two decades, has led him to some of this country’s darkest corners.

“Horton” may be the most perfectly Seussian of names and, in one of his trademark illustrations, the good doctor would have made hay with Horton’s hair, piled on top of his head with all the glory of the Grinch’s full, full eyelashes. But this Horton has heard some things.

“Information has been received by Const. Horton that a Hell’s Angel who worked at the ‘booze can’ near Pickton’s was put through a grinder and fed to the pigs,” reads one doozy of a sentence, describing events from 2001, in Forsaken: The Report of the Missing Women Commission of Inquiry, Wally Oppal’s probe into how police responded to the Robert “Willie” Pickton murders out in B.C.

For all the commotion surrounding the expected appearance of Nigel Wright in the Duffy trial in Ottawa on Wednesday, there is likely no one more excited about seeing Stephen Harper’s former chief of staff enter the witness box than Horton, who has been on this case since March 2013.

Here, finally, is the very heart of the matter.

“When the story broke, I couldn’t believe it,” Jill Anne Joseph, the Senate director of internal audit at the time, told Horton in 2013. “That was as big a surprise to me as to any—”

“Which, which story?” Horton asks her and, again, the stenographer dutifully records how he posed the query: “[Laughing].”

Wright’s role in these, the final days of the Crown’s case against Duffy, concerns one small slice of the 31 charges facing the disgraced senator—the three related to bribery (the rest are for fraud and breach of trust).

In broad strokes, the legal issue at play is whose idea it was for Wright to arrange for a bank draft from his own account, payable to Duffy’s lawyer’s firm, in the amount of $90,172, which Duffy then used to pay off questionable expense claims he filed based on his living in Ottawa as a senator for P.E.I.

Crown prosecutors propose that Duffy solicited the funds; the defence that they were forced upon him in the course of what Duffy described during one memorable Senate address as a “monstrous fraud” designed to make him the fall guy in the scandal.

Politically, Wright’s testimony raises the possibility that we will get a glimpse into the inner workings of Harper’s ultra-secretive PMO, and that, in the midst of a tightly contested federal election, we may learn when Harper became aware of the fact that it was Wright’s money Duffy used to clear his allegedly bum claims.

Harper has said he learned that Wright cut the cheque only after CTV’s Bob Fife reported it on May 14, 2013. Some find that claim tough to countenance.

But, following Horton and his fellow RCMP officers’ lines of questioning in those interviews, already made available as part of disclosure in the Duffy matter, and looking at documents Horton filed with the courts as part of his investigation, a wider net than these narrow issues gets cast. You can bet that Donald Bayne, Duffy’s combative lawyer, will use every opportunity to widen the circle around his client in the course of what promises to be a lengthy cross-examination of Wright.

(Horton is, on the whole, mild-mannered, but it’s clear that Bayne’s shenanigans get the officer as exercised as they do the Crown prosecutors, Mark Holmes and Jason Neubauer; as discreet as they all are, it’s hard to cover up the physiological effects of rage.)

Joseph helped to stickhandle the probe into the expenses of Sen. Pamela Wallin, whose claims first raised the issue of residency as a problem for the Senate, and she managed the referrals of the Wallin, Duffy, Patrick Brazeau and Mac Harb files to the auditing firm Deloitte.

She was, to put it a different way, at the eye of the developing Senate expense scandal storm, and she had a lot to say about how it developed.

(Here’s as good a place as any to note that Bayne wants introduced as evidence a parallel Joseph audit that the Senate has sought to keep protected by parliamentary privilege and, therefore, secret; Justice Charles Vaillancourt has heard the arguments on this and is expected to give a decision this month).

In speaking with Joseph and O’Brien, the Senate clerk, Horton and his colleague Benoit Jolette—both officers were corporals at the time—appear most interested in figuring out how, in early May 2013, the Senate’s internal economy steering committee—bear with me here!—generated a series of draft reports focused on Duffy before finally tabling the official 22nd Report of the Internal Economy Committee on May 9.

That all sounds terribly esoteric, but the upshot is that the final document went awful easy on Duffy, more or less handing him a pass. The reports detailing the very similar expense filings of Brazeau and Harb, meanwhile, are pretty harsh, stopping just short of calling their conduct criminal.

The steering committee’s work took place in early 2013 against the backdrop of Wright’s acknowledged campaign to manage the scandal then swirling around Duffy, who, up until then, had been a high-profile representative of the Harper Tories and a star fundraiser.

“A purpose of this is to put Mike in a different bucket and to prevent him from going squirrelly in a bunch of weekend panel shows,” Wright famously wrote of his efforts in an email to colleagues.

Somehow, and over the objections of Furey, the token Liberal on the committee, several passages critical of Duffy contained in early drafts of the 22nd report never made it into the final document.

As Joseph put it in her interview: “Between 3:30 and 5:30, more changes were made at the request of Tkachuk’s and Carolyn Stewart-Olsen outside of the committee meeting.”

The exchange that comes next in the transcript is worthy of David Mamet.

Horton: “From somebody within THE PRIME MINISTER’S . . .”

Horton: “OFFICE, what’s your thoughts on that? . . . I’ll try to word this a different way. Does THE PRIME MINISTER’S OFFICE have any involvement and . . . should they have any involvement, or are they crossing the line getting involved in an independent audit’s subcommittee’s business?”

Joseph: “Listen, Greg, to be honest with ya (sic), I don’t know, I don’t understand politics.”

Horton, just to be clear here, isn’t presenting this theory for Joseph’s approval; he’s careful to say, now and then in the course of the interview, that he’s raising these scenarios as hypotheticals.

But he’s interested in the protocols and process, the normal routine, right down to the nitty-gritty of what computer is used to make what changes.

And it seems clear it’s not for nothing. It awaits the testimony of someone like Wright to get to the realities below all this, and it’s going to be fascinating to watch.

As a matter of sheer curiosity, too, Wright’s appearance may also help clear up the question of why Duffy is charged with bribery for accepting the $90,000, but Wright is not similarly charged, even when it’s not in dispute that he provided the cheque.

The decision about whom to charge appears to have been taken only after the RCMP spoke to Wright, and of that discussion we have just a few tantalizing tidbits presented to court by Bayne in his opening remarks. (“We are basically forcing . . .somebody to repay money that they probably didn’t owe, and I wanted the Prime Minister to know that and be comfortable with that,” Bayne said, apparently quoting from the Wright transcript.)

Likewise, we may find out whether Wright resigned or got fired as a result of his role in the scandal. (Harper has asserted both.)

As for the obstacles that all this throws up against the Harper reelection campaign now under way, those are another matter. Unless something entirely new pops up in the course of Wright’s testimony—and, who knows, it could—all of it has likely already been figured into the electorate’s calculus, and remains academic. And yet . . .