'No circumstances' in which Trudeau would support Harper as PM 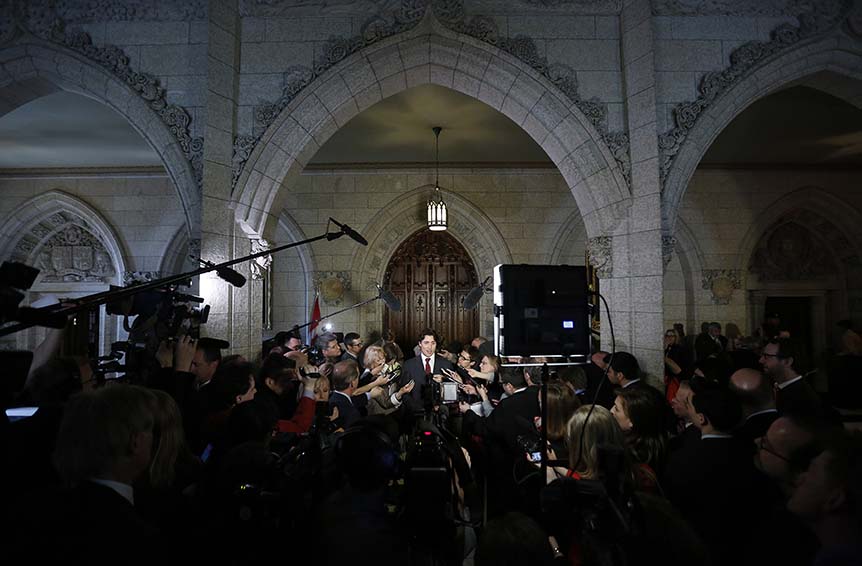 Liberal leader Justin Trudeau speaks to journalists in the foyer of the House of Commons on Parliament Hill in Ottawa April 15, 2013. (Chris Wattie/Reuters)

MONTREAL — No way, no how, would the Liberal Party of Canada support a government led by Stephen Harper, leader Justin Trudeau said Tuesday, opening up the possibility of working with the NDP to replace a Tory minority or trigger another federal election.

In his strongest statements to date, Trudeau said “there are no circumstances” under which he would prop up a minority Conservative government.

“I have spent my entire political career fighting against Mr. Harper’s narrow and meaner vision of what Canada can be and what the government should do,” he said Tuesday after an arts-and-culture announcement in Montreal.

“There are no circumstances in which I would support Stephen Harper to continue being prime minister of this country.”

Most polls since the beginning of the 11-week election campaign have suggested no party is in solid majority territory and that the Liberals, NDP and Conservatives are in a tight, three-way race.

NDP Leader Tom Mulcair maintains that his goal is to ensure Harper doesn’t win government and has also said he would be willing to work with the Liberals to ensure that happens.

Trudeau has consistently rejected the notion of a formal coalition with the NDP to govern the country.

On Tuesday, Trudeau sidestepped questions as to whether he would support a NDP minority, saying only he had confidence the Liberals would win the election.

His answer did suggest, however, that he would be willing to work with the NDP in a minority government context.

“Canada has had minority government before,” he said Tuesday. “And parliamentarians elected by Canadians have always been able to ensure that Parliament functions.”

Trudeau’s comments Tuesday suggest that if Harper wins a minority on Oct. 19 the Liberals would either have to work with the NDP— or another party in order to gain enough seats to form a majority — or trigger another election.

Earlier Tuesday, at an event with local candidates and supporters, Trudeau announced the Liberals would give $380 million in additional funding for the arts and undo Conservative funding cuts to the CBC.

Trudeau said he would reverse the $115 million in annual cuts the Conservative government made to the national broadcaster and would top up funding for CBC/Radio-Canada by an additional $35 million a year.

He also said he would double the annual funding for the Canada Council of the Arts to $360 million from $180 million.

Telefilm Canada and the National Film Board would together get an additional $25 million a year, he said.

He held his arts announcement in Quebec, a province with strong ties to its artistic communities.

“For 10 years that the Conservatives have been in power they’ve been fierce opponents to the cultural industry in this country,” Trudeau said.