Politics Insider for January 29: Scheer blast's Trudeau's foreign policy 'disaster' as Parliament resumes, the U.S. lays charges against Huawei and Meng, and look who's heckling in the House 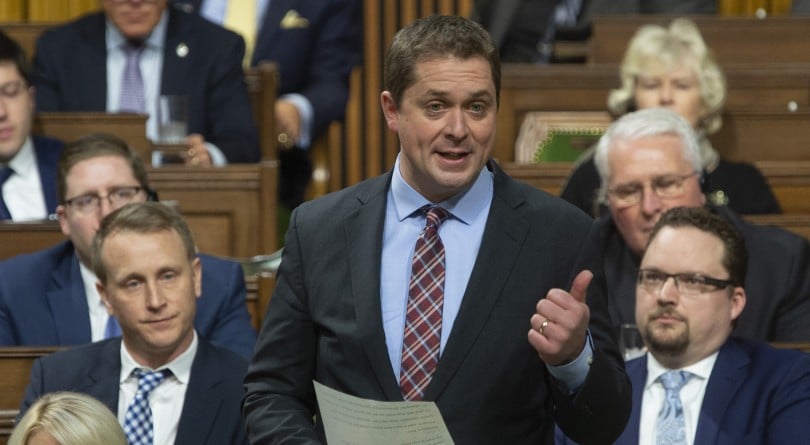 Leader of the Opposition Andrew Scheer rises during Question Period in the House of Commons Monday January 28, 2019 in Ottawa. THE CANADIAN PRESS/Adrian Wyld

With MPs back in the House after the six-week winter break, Conservative Leader Andrew Scheer wasted no time going after Prime Minister Justin Trudeau for his government’s handling of the Meng case, relations with China and the firing of John McCallum. “It’s clear that the prime minister’s foreign policy is a disaster and Canadians are paying for his mistakes. … After clowning around in India and inviting a convicted terrorist along with him, he then was forced to take concession after concession from Donald Trump. He even angered our partners in Japan and Australia. And now we have the debacle with China. Why did the prime minister show such weakness and wait so long to fire his ambassador?” (Canadian Press)

Like Trudeau, Foreign Affairs Minister Chrystia Freeland hasn’t said why the government didn’t dismiss McCallum after his first gaffe (recall that he first told Chinese journalists the U.S. arrest warrant for Huawei CFO Meng Wenzhou may have been politically motivated before later saying Canada would be better off if the U.S. dropped its extradition). Speaking to reporters, Freeland repeated a line other cabinet ministers have offered: McCallum’s comments were inconsistent with Ottawa’s position: “The first and foremost job of any ambassador in our country is to express accurately our government’s position. And that is what made it untenable for Ambassador McCallum to remain in his role.” (Twitter video)

Cheep shot: As one might expect, Chinese state media is losing it over McCallum’s dismissal, since his earlier comments had fit perfectly into China’s narrative of the case: “Ottawa is now as sensitive as a frightened bird. A few words by the ambassador should not have posed any impact on court decisions. Nonetheless, judging from the reactions of many politicians and journalists in Canada, McCallum’s remarks are like a dreadful monster.” (Global Times)

And that was before the U.S. hit Meng and Huawei with nearly two-dozen fraud, money laundering, obstruction of justice and theft charges Monday and filed a formal extradition request to Ottawa:

“Criminals and bad actors can be certain that they will not get away with criminal activity,” acting Attorney-General Matthew Whitaker said at a Washington press conference announcing the charges. “Those who do business in the United States can also be certain the Department of Justice will protect them from criminals, no matter how powerful or influential they are.”

Mr. Whitaker also said he was “deeply grateful” to the Canadian government for arresting Ms. Meng on behalf of the United States last month. Ms. Meng is out on bail in Vancouver. On Monday, Ottawa said it had received a formal extradition request. (Globe and Mail)

As Parliamentarians settled into their new digs in the West Block, the acoustics were good and the decor—along with the MP’s rhetorical material—familiar, writes Paul Wells:

Sitting in the new Commons as Question Period loomed, I worried that an echo would make most of what anyone said incomprehensible. No such problem. The new Commons does a disservice to any MP who’s soft-spoken—anyone who speaks in conversational tones found their voice didn’t carry—but anyone who put some diaphragm into it, including most hecklers, could make themselves heard without difficulty. And as a bonus, the sound was dispersed enough that the origin of most heckles was hard to pinpoint. So I cannot tell you who shouted, “How much are your cufflinks worth?” as Finance Minister Bill Morneau rose to take a question, but I can say everyone in the room heard every word. (Maclean’s)

Suffice it to say, heckling remains as prevalent as ever, despite Speaker Geoff Regan’s increasing use of ‘name and shame‘ tactics. Regan has ramped up his practice of calling out MPs for heckling, something he’s done 318 times since 2015, with more than half of those episodes occurring last year alone, according to a tally by CBC’s Éric Grenier. Here were the most-scolded MPs:

The top 15 are all Conservatives, with three in particular being the most frequent targets of Regan’s disappointment. Western Canadian MPs Ed Fast, Kevin Sorenson and Michael Cooper were each named on 17 occasions. Not far behind these three were Blake Richards and Erin O’Toole with 15 each, David Anderson with 13, Chris Warkentin with 12, and Alberta MPs Ron Liepert and Ziad Aboultaif with 11 each. The Liberal MP called out most often by Regan was Rodger Cuzner, a fellow Nova Scotian, who was named seven times. Two New Democrats were named five times: Peter Julian and Pierre Nantel. (CBC News)

If there’s a silver lining to the anti-immigrant, Trudeau-death-threat uttering yellow vest movement, it’s that you might just occasionally learn a thing or two about the mechanics of pipelines. Mayor Murray Wright of Virden, Man. apologized after he told a yellow vest rally he’d like to see Trudeau “duct taped to the front of … the first pig we run through the pipeline when we get it built out west … with that pig behind his ass when it goes.” PIGs are devices pushed through pipelines by liquid or gas to clean and inspect them. (National Post)