Paul Wells: On Ukraine, the Liberal government's actions and rhetoric are starkly out of proportion. It is government by champion self-aggrandizers. 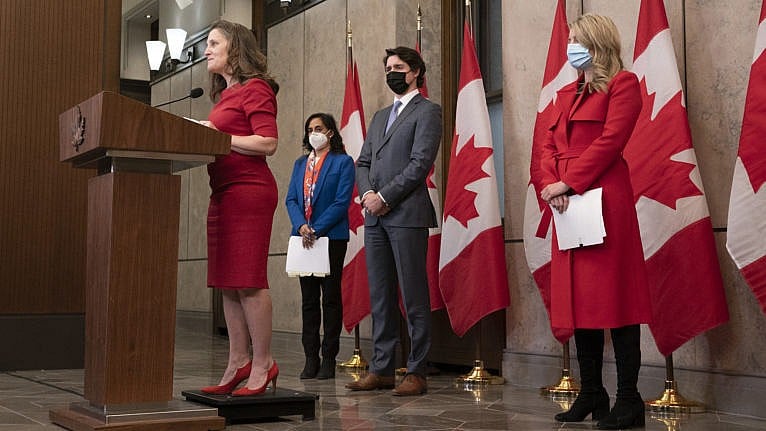 Anand, Trudeau and Joly listen to Freeland speak during a media availability following a cabinet retreat, on Jan. 26, 2022 (Adrian Wyld/CP)

We’re still very far from knowing for sure that Russia will invade Ukraine. Or at least that it will invade Ukraine again, more than it already has and on a scale larger than its regular, continuing cross-border harassment. Joe Biden’s “guess” is that there will be an invasion. The U.K. is on edge too. These are serious concerns from at least one serious government.

Skeptics include the French, who have amply earned a hearing when they disagree with the Americans and the British about a security analysis. “We see the same number of [Russian] trucks, tanks and personnel [near the border with Ukraine]” as the Americans and Brits, Le Monde quotes a source in Emmanuel Macron’s government, “but we cannot deduce from all of this that an offensive is imminent.”

Other skeptics include Ukraine’s Centre for Defence Strategies, run by a pro-Western former Ukrainian defence minister. They have what amounts to a bay window looking out onto Russian troops and they say Russia’s army is not behaving the way Russia’s army normally behaves before it invades something. “Russian troops move mainly as battalion tactical groups (mechanized, tank and airborne troops) and tactical groups (artillery, multiple launch missile systems). Russia hasn’t completed the formation of groups of troops in operational areas. It also hasn’t established and tested its wartime administration system. If Russia was conducting preparations for a large-scale invasion, it would have been much more noticeable.”

MORE BY WELLS: This just in: The PM has been phoning cabinet ministers

It’s important to emphasize that the think tank doesn’t at all rule out an invasion somewhere down the line, and it argues that the best thing Ukraine can do with its time is to prepare against the worst.

Ukraine’s current defence minister has a similar take. He sees no imminent attack but he’s prudent, as you would be if the neighbours had 130,000-odd troops on your border, and he is not pleased with Germany’s reluctance to send military aid as a way of ensuring Vladimir Putin doesn’t get any ideas.

All of which brings us to Justin Trudeau. As the list of world leaders who are unimpressed with him grows, the Prime Minister has been increasingly listless about foreign policy. Probably he pays no political cost for this at all. More and more Canadians seem convinced the entire rest of the world is more trouble than it’s worth, so our country’s longstanding isolationist streak has lately grown until it now covers most of the road. Nor does the slate of available alternatives lead most voters to believe they’re being cheated out of a chance to witness some masterful statecraft.

But sometimes events impinge. On Ukraine, the Trudeau PMO’s first response was a welcome loan, followed by a bit of pathetic theatre. They followed up with some more pathetic theatre, but by this week the feds had started saying a few things clearly or at least comprehensibly.

Trudeau and three cabinet ministers left a three-day cabinet retreat to say they will extend a Canadian training mission in Ukraine that the Ukrainians and their NATO neighbours hoped would be extended anyway; that the size of the Canadian deployment will be slightly increased; that Canada will send useful military equipment that can’t be used to kill anyone; and that if shooting begins on a large scale, all those Canadians will come straight home. “In the event of a Russian incursion or invasion into Ukraine, we will ensure that Canadian military remain safe,” the Prime Minister said. Because that’s what you’re looking for when you join a volunteer army: safety.

RELATED: The hawks are screeching over Ukraine. Will cooler heads prevail?

For satisfying outrage over the substance of this announcement, see brother Coyne. I had already argued, last week, that a combat commitment and lethal weapons shipments might be outside the scope of what Canada should send, so I can’t now claim to be furious. Instead let me try a few other angles on all this.

First, why not send lethal weapons? Partly because I’ve read CJ Chivers’ reporting on what happens when you ship weapons into a chaotic battle theatre: pretty soon, everyone has them, including the people who have your designated good guys surrounded. Mostly because I believe Canada could add little that’s useful to the large arsenal already being sent to Ukraine by other countries. I just want to point out that I just gave a simple, straightforward answer to a question, which is something the Prime Minister of Canada didn’t do when he faced the same question five times on Wednesday. That’s because unlike him, I respect you and your intelligence.

Second: there’s a lot of chatter this week about how Canadian policy on Ukraine is the pure product of pressure by the large and fearsome Ukrainian-Canadian lobby, personified by the deputy prime minister. I find this sort of argument mystifying, for three reasons. First, the Ukrainian Canadian Congress actually isn’t satisfied with Trudeau’s announcement. More important, diaspora politics is understandable and legitimate. About 300 years of Canadian history has been heavily influenced by our sizeable French, English, Scottish and Irish diasporas. It’s pretty rich to ask anyone else, very much including Ukrainian-Canadians, to stay out of it. And finally, if the geography were a little different and it were Spain or Greece tucked up against menacing Russia and Belarus, there’s no reason to think the behaviour and attitude of successive Canadian governments would be any different.

If you’re curious about the Ukrainian-Canadian angle, four cabinet ministers showed up for an online town hall on Tuesday night, at the invitation of Winnipeg South Liberal MP Terry Duguid, with the Ukrainian Canadian Congress’s assistance. Getting Chrystia Freeland, Mélanie Joly, Randy Boissonault and Bill Blair on a single Zoom call is quite a haul, and it surely reflects the party’s eagerness to hold a seat with a lot of Ukrainian-Canadian voters that Duguid lost three times before winning it three times since 2015, once quite narrowly. But you can watch the session here, and the assembled ministers said nothing to their highly-engaged niche audience that Freeland didn’t say to the whole country the next afternoon.

I want to talk a bit about what she did say. At the Wednesday news conference with Trudeau, Freeland said:

“This is a struggle between democracy and authoritarianism. This is a direct challenge to the rules-based international order and an attempt to replace it with a world in which might makes right, and where the great powers—the nuclear-armed powers —have the authority to redraw the borders, dictate the foreign policies, and even rewrite the constitutions of sovereign democracies, whose only fault is that they are smaller and their militaries are not as powerful.

“Canadians—our own parents and grandparents—fought and died to establish the rules-based international order during and after the Second World War. They did that because they knew it was the right thing to do, of course, but also because they understood that Canada, as a middle power, had a clear and direct national interest in a world order based on rules.

“That rules-based international order is today facing its most serious challenge since it was first established. Ukraine is on the front lines of that struggle, and that is why Canada is standing with Ukraine.

“The world’s dictators are watching to see if our alliance of democracies has the will and the capacity to stand up for the rules-based international order. We must and we will show them that we understand the gravity of this challenge and that we will rise to it.”

I don’t think it’s nitpicking to say that the government’s actions and rhetoric are starkly out of proportion. Freeland is describing an existential threat to democracy; Trudeau is packing for a weekend road trip. If this test is in any way comparable to the one “our own parents and grandparents… fought and died” for, then don’t send a smaller deployment then you sent last year to the old-folks’ homes of Quebec and Ontario, and don’t promise to airlift the drill sergeants home at the first sign of trouble. And if it’s not that kind of test, then stow the Patton speeches and the back-patting.

This country is in a kind of extended despair for a bunch of reasons, most obvious and many beyond anyone’s control. But one item on the list that our putative leaders could address if they felt like it is that we seem to be governed by champion self-aggrandizers. It’s a cliche in politics that you should under-promise and over-deliver. This lot are addicted to playing tee-ball and calling themselves Mickey Mantle.

It would be tidy and convenient if democracy faced a single test in the bloodlands north and east of Kyiv. But of course democracy is tested dozens of times a day: in the South China Sea, on Tucker Carlson’s Fox News show, in one’s own choice of election rhetoric. People who study this sort of thing for a living say democracy is having a terrible century so far. Canada’s contribution to the health of democracy isn’t a binary switch—is Canada Back or Not Back?—it’s the result of sustained and serious engagement, or it’s the sum of a hundred decisions not to engage or be serious.