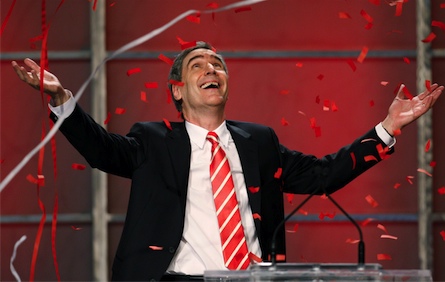 It’s clear that Ignatieff intends to ignore mounting media calls to spell out in detail what he stands for. And it’s equally clear from today’s speech that he doesn’t think he needs to — not now, certainly, and perhaps not ever. What he seems to have decided, perhaps based on recent polls, is that the “longing for change” he detects in the public is not necessarily about a change of direction, but a change of tone.

There isn’t a lot of room these days between the Liberals and the Conservatives on policy, especially after the Tories proposed, and the Liberals endorsed, the January budget. And the public keeps signalling to pollsters they’re more or less content with the government’s handling of the economy.

So Ignatieff’s speech promises little more than a more uplifting style of politics, emphasizing patriotism, a national vision, and less overt partisanship — all calculated to play to Harper’s perceived weak points. “A new politics,” he puts it, “that replaces spite and spin with civility and common purpose.”

Aside from that, well, as I say it’s pretty thin. The only specific policy commitment I could find was “a common national standard for employment insurance.” Otherwise, it’s just a laundry list of things it would be nice to have: A Canada where every child gets an equal start! Where every student who gets the grades gets to go to the best education in the world! Where no Canadian ever has to struggle with the burden of illiteracy! Where no Canadian with a disability faces obstacles… As I listened, I found myself mentally reciting the words to Big Rock Candy Mountain:

Still, if you don’t pay too much attention to the words, it’s an appealing melody, full of ambition and idealism. His hope for Canada, he says, is “that we surprise ourselves, that we astonish ourselves. And that we astonish the world.” The country has a “moral purpose,” and that is “to teach tolerance and diversity and citizenship to a tormented world.” Canada is a “serious country… you ask us to do something hard and we will never let you down.” Though hardly controversial, these are nevertheless deliberate choices — he could have emphasized other qualities, other themes — and they are, to my way of thinking, the right ones.

But he’s digging himself in to a thoroughly contradictory position — if position is the word — on national unity. On the one hand, that we are “one people,” united in purpose and called to do great things together. On the other, usually said in French, that “you can belong in the order you choose” — Canada first, (your province here) second, or (oh who are we kidding, Quebec) first, Canada second. He has used this formulation now on several occasions, so it’s obviously meant to be a signal statement of his approach to the national question, to follow recognition of the Quebec “nation.” Which is to say confusion, pandering and capitulation.