Not velvet, but revolution

Paul Wells on Iran: Choices force more choices, and events force events. This business did not start out as a people's revolt. 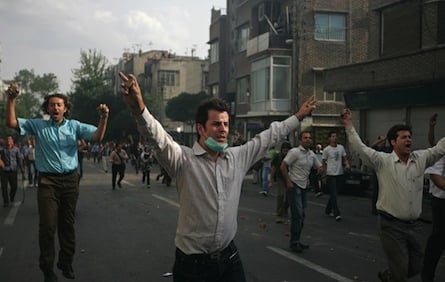 As soon as you know how the story will end, simply knowing speeds the end’s arrival. Only five years passed between Lincoln’s House Divided speech and the Emancipation Proclamation. Gorbachev told his wife in 1986: “We can’t go on like this.” On Friday — yesterday — Ali Khamanei used Friday prayers to deliver a harangue against his own people, telling them to ignore logic and the evidence of their own hearts, to accept the sham election, and to go home and live in the dark for yet another few more years.

And he put all the legitimacy of the Islamic Republic itself behind his demand.

The Iranian police commander, in green uniform, walked up Komak Hospital Alley with arms raised and his small unit at his side. “I swear to God,” he shouted at the protesters facing him, “I have children, I have a wife, I don’t want to beat people. Please go home.”

A man at my side threw a rock at him. The commander, unflinching, continued to plead. There were chants of “Join us! Join us!” The unit retreated toward Revolution Street, where vast crowds eddied back and forth confronted by baton-wielding Basij militia and black-clad riot police officers on motorbikes.

Vast crowds? But the Supreme Leader told them to stay home. He wept as he told them he loved them. He said the election was a product of the Islamic Republic itself and therefore couldn’t be flawed. And in so doing he set the regime’s entire legitimacy against what was happening on the street.

Choices force more choices, and events force events. This business did not start out as a people’s revolt. Everyone knows Mir Hossein Mousavi had no plan to to question the regime. He had every intention of serving it faithfully, perhaps a tad less belligerently than Ahmadinejad, but essentially without making any real waves. Everyone can hear that this resistance is one that chants allahu akbar every night; if the regime’s actions had remained even minimally compatible with their faith they would never have questioned the regime. Not like this. Not in massive crowds in every large city, crowds that do not stay away for long even when the regime’s last loyal thugs beat them and tear-gas them and shoot them dead where they stand, dozens so far and more to come.

Khamanei set the terms for this battle. He has put himself on the wrong side of history. Barack Obama has been extraordinarily careful all week, but he called it right today with a modest but implacable statement,  with its references to “the universal rights to assembly and free speech,” the regime’s “unjust actions against its own people,” and his evocation of King, whose shrine at the Lincoln Memorial he visited on the day before he became President. “‘The arc of the moral universe is long, but it bends toward justice,'” he wrote. “I believe that…. [W]e are bearing witness to the Iranian peoples’ belief in that truth.” Note that, as Lincoln did with the House Divided speech, Obama is using quotation to show that he is not asserting a truth but merely acknowledging one. Lincoln was saying, “You don’t need me to tell you a house divided against itself cannot stand.” Obama is saying, “I’m not making this happen. I just know that it will.”

Very well then. It won’t be velvet.