Notes on the Throne Speech, and a reminder that Julie Payette is governor general

Paul Wells: The speech was further from 'bold solutions' and closer to 'old ways of thinking'. Then the PM took to the TV to deliver another message. 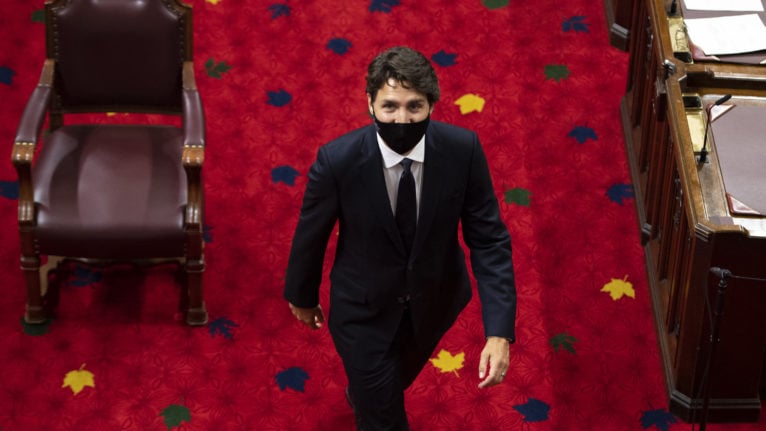 Trudeau arrives prior to the Throne Speech on Parliament Hill on Sept. 23, 2020 (Justin Tang/CP)

There is the Prime Minister.

He is standing in front of his desk. He is looking right at you. Right at you.

He is warning of “a fall that could be much harder.” But while family Thanksgiving is a goner, he says, “we still have a shot at Christmas.” (Spoiler: Christmas won’t work either.)

He is describing a “covenant,” which Webster’s defines as “a usually formal, solemn and binding agreement.” “The federal government will have your back whenever you need it,” he says. That’s the covenant. He also says, “If you need a test, you should be able to get it quickly.” Which is odd, because a lot of people can’t get a test quickly. And this guy’s been the Prime Minister for a while. And I thought we had a covenant.

But already this column is going about as well as Justin Trudeau could reasonably have hoped it would, given who wrote it, because at least I am talking about his remarks on the TV, and not Julie Payette’s in the Senate. Julie Payette is the governor general, and Justin Trudeau made that happen. And lately it’s looking as though a lot of people who thought they had a covenant regarding safe workplaces are claiming Payette wasn’t helpful on that front. Which made planning Wednesday’s ceremonies a bit of a logistical head-scratcher for the government, because when Trudeau inexplicably prorogued Parliament in August after kind of randomly firing his finance minister, he ensured that the next messenger of his government’s new direction, to the extent there would be a new direction, would be Payette, because it’s the governor general who gets to read a Throne Speech. And lately Payette is more of a wall than a window when it comes to getting your message out. Clearly some remedy needed applying.

So the PM asked for broadcast time so he could interpose himself bodily between Payette and the evening newscasts, thus ensuring at least some of the clips would feature his mug instead of hers. At least one broadcaster seems to have ceded the broadcast time on the understanding that Trudeau’s message would be “urgent” and “not political.” In the end the message was: please remember to wear a mask, and hey, have you heard about our Throne Speech?

Trudeau spent March to June delivering the first part of that pitch five times a week from the front steps of the house he’s using while nothing happens at his official residence. He could have said the same thing at the same venue yesterday or tomorrow. He will, in fact, be invited in the next few days to rise in the Commons and deliver an “address in reply to the Speech from the Throne,” as prime ministers always do. That speech will certainly be televised. He didn’t need TV time on Wednesday night. It’s not a scandal that he got some. But let’s not kid ourselves about motive.

The actual speech, the one delivered by Julie Payette, who is the Governor General, because Justin Trudeau wanted Julie Payette to be the governor general, was rather further from “bold solutions” and closer to “old ways of thinking” than it had been billed in advance. And that’s probably a good thing. It was unrealistic and a bit creepy for a lot of people to spend the summer viewing a global public-health crisis as a chance to win political fights. Plagues generally complicate, rather than simplifying, public administration. Belated recognition of this reality is movement in the right direction.

The speech was four times as long as this government’s first throne speech in 2015, partly because it reminded us at length about things that have already happened: personal protective equipment shipped, Canadian Forces personnel in long-term care homes, the $19 billion Safe Restart Agreement, the $2 billion Safe Return to Class Fund, the COVID Alert app, the assault-weapons ban. It contained two things that sounded like sweeping advances in social policy: national pharmacare and a national early learning and childcare system.

It is handy to read the fine print. A National Early Learning and Childcare Framework was a Liberal platform commitment in 2015, and the project received $7.5 billion in the government’s 2016 and 2017 budgets. Two of the three elements of a pharmacare plan in Wednesday’s speech, which Julie Payette read, were announced in the lamented Bill Morneau’s 2019 budget. The third, “working with provinces and territories,” has historically been used as often by federal governments to explain the absence of progress as its presence.

This suggests the Liberal government today is, to several decimal places, identical to the one we had before Trudeau fired his finance minister and asked the governor general he selected, Julie Payette, to prorogue Parliament. This suggests he had another motive for proroguing, and I know there’s been lots of speculation about what that motive could have been.

So to sum up: the Prime Minister fired his finance minister for counselling caution and has now delivered caution. He shut Parliament down so he could signal a bold new direction, and is now continuing the work he was already doing, though the same cannot yet be said for the parliamentary committees that were investigating him. He went on TV so you wouldn’t be reminded of a nasty workplace dispute at the GG’s residence. When I write about such things, I get called a cynic, as though I were the one who thought of doing them. Please wear a mask. And download the app, he’s right about that.