Nothin' wrong with a little baby-tossing

Men’s hobbies and preoccupations do not discount their political insights and analyses. Neither should women’s 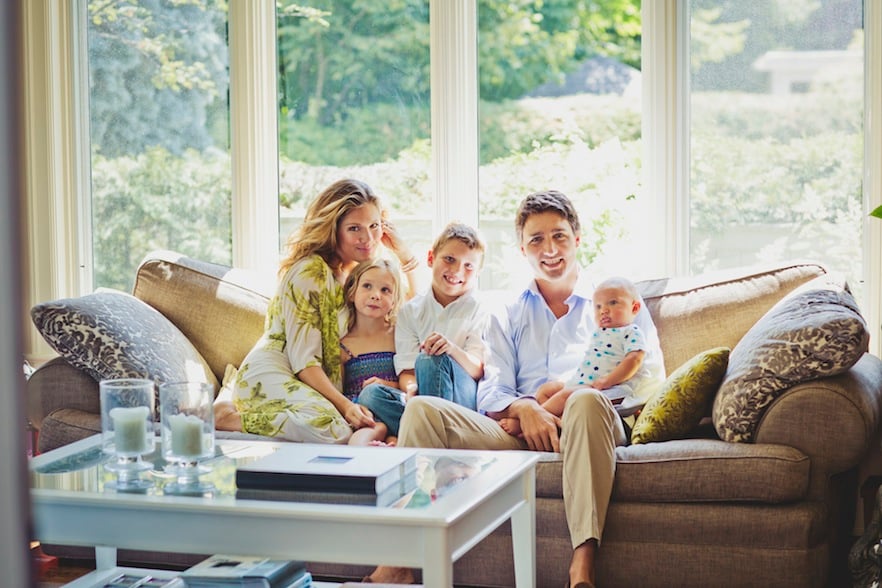 Editor’s note: Chatelaine and Maclean’s are both owned by Rogers.

Many charged that Carol Toller was “soft” on Trudeau. The Liberal leader had invited Chatelaine into his Ottawa home and then proceeded to do what any able-bodied male politician with young children would do in front of a camera: he balanced his baby, Hadrien, on one hand and raised him high in the air — an offering impossible to resist. Unless, that is, you are a “serious” voter, in which case you consider babies in a political context distracting, gratuitous and even sexist.

Most of the critics — many of them journalists — felt the story demeaned women because in addition to reporting on Trudeau’s political platform, it noted the Liberal leader’s fashion choices, fridge magnets, and luscious hair. The National Post‘s Robyn Urback called the feature an “insult to serious women voters in Canada.”

I don’t know that I am a serious voter (I once voted for a candidate because I felt sorry for him), but I do know what I expect when I open Chatelaine. I expect recipes, home decor, and, in this case, beautiful, sun-drenched photos of the Trudeau family swimming fully clothed (what fun!). I do not expect hard-hitting political reporting. In fact, were I to find Chatelaine filled with stories about robocalls and Mike Duffy, I would immediately return it — as any politics wonk would likely return Maclean’s if she discovered it crammed with recipes for wheat-berry tabbouleh and chicken pot pie. Chatelaine is a lifestyle magazine. Toller’s piece is smart and well researched, but it is, I suspect, purposely light.

The Twitter backlash “seems to be a lot of blaming Trudeau for Chatelaine being Chatelaine,” tweeted journalist Dale Smith.

Cosmopolitan recently began covering politics relating to abortion access in the United States. The magazine’s editor in chief Joanna Coles has faced criticism from people who can’t accept that a women’s lifestyle magazine might deal with serious issues. An NPR reporter suggested this week that it is hypocritical for Cosmo to cover the wage gap and abortion access when its tone is mostly superficial and hypersexual.

Cole responds: “I think that women’s lives are multi-layered. I have no problem understanding that women are interested in mascara and the Middle East. Men are allowed to talk about sports relentlessly and yet we still take them seriously. I don’t understand why women can’t talk about fashion, or sex, or love and not be taken as seriously as men.”

It’s unlikely anybody would fault Sportsnet for failing to take Stephen Harper to task in an interview; or for asking him what he would do to encourage physical activity across the country, while ignoring issues like fighter jets and his stance on Israel. Men’s hobbies and preoccupations do not discount their political insights and analyses. Neither should women’s.

This isn’t to say the Liberals are without fault when it comes to their women voters. Trudeau’s notorious ladies night last November was hugely patronizing. Women at the event (I was one) were told to write down questions on scraps of paper, which he pulled from a box and answered — like a sex-ed teacher. No food was served — only candy. The event, essentially a one-man cougar bar, could have benefited from a few carb-based snacks. (At one point in the night, an older woman in a fur coat who had clearly had too much Jackson Triggs Pinot Grigio and zero dinner, leaned into me and whispered in my ear “I kissed his cheek.”) Ladies Night, in other words, was not good for the sisterhood.

Political coverage in women’s lifestyle magazines is good for the sisterhood. Women shouldn’t have to cease being themselves in order to engage seriously with politics. We like watching attractive men play with babies. We also like discussing policy. Chatelaine put the two together. Get over it.

On Friday I sat down with Toller to discuss her Chatelaine article: