Nothing is certain but debate on taxes in politics

Justin Trudeau wants to raise taxes on the rich, while Tom Mulcair is aiming at corporations. So far, Stephen Harper seems to be winning the tax debate. 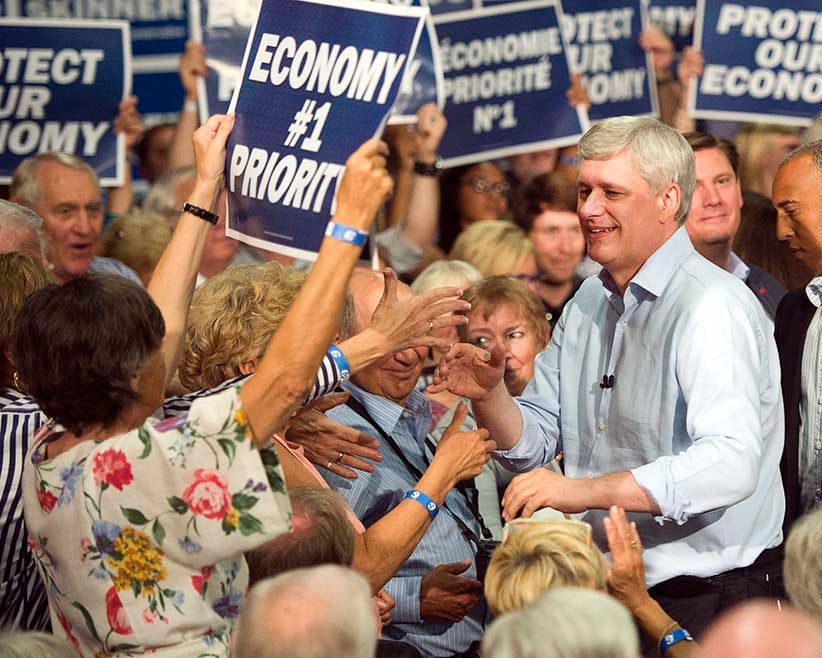 In less than 25 minutes in the Ontario town of Peterborough last week, Stephen Harper uttered the word “tax” something like 57 times. For the most part, the context for each reference was straightforward: Higher taxes are bad, lower taxes are good.

The statement of high principle, the Prime Minister’s attempt at philosophical summation, arrived at about the 16-minute mark of this version of his stump speech. “The simple fact is this: Why do the NDP and Liberals want to spend all this additional money? The reason is very simple: because they think they know how to spend money better than you do. As Conservatives, we understand your money belongs to you, not to any bureaucrat, and not to any politician in Ottawa.”

Probably Justin Trudeau and Tom Mulcair do not believe in total confiscation, but, within the rhetorical excess is a basic view of taxation and an implicit debate about governance.

Six years ago, Harper aligned himself with a view that “no taxes are good taxes,” and, although there is an interesting academic debate to be had about the purpose and effect of taxation, this seems to follow from that: a sweeping declaration that seems to cast doubt on the very notion of taxation. Last week, he made a show of promising a “tax lock” law that would, for fun, pretend to ban the federal government from raising taxes for the next four years. There are nods in the Conservative campaign to security and values, but principally, there is a commitment to discount. Harper is effectively running a Wal-Mart campaign predicated on the idea of paying less.

Whatever his feelings about the essential goodness of taxes, the Prime Minister does not oppose all taxes, obviously. He is okay, for instance, with the taxes that have paid for tens of millions in promotional advertising for his government. His government is not bashful about the billions in “investments” that taxes allow it to announce. The Conservative government has also not been categorically unwilling to raise taxes: Hundreds of millions in new revenue were booked in 2013 as a result of increasing tariffs on imported goods.

Still, it must be conceded that, as far as his advertised view, Stephen Harper is winning the tax debate. Yes, the Liberals and New Democrats are proposing to increase certain taxes, but, as others have noted, the vast majority of voters can happily imagine those taxes being applied to other people: rich people (in the case of the Liberal proposal) and corporations (in the case of the NDP policy). No one is proposing that everyone pay more.

By international standards, Canadians do not pay in obvious excess. In 2012, the OECD ranked Canada 24th of 34 developed countries in total government revenue as a percentage of GDP—above the United States, but below most European countries. The Conservatives can boast now that the federal tax “burden”—revenue measured as a percentage of national GDP—is at its lowest point in 60 years. But about half of the four-point drop in federal revenues over the last 15 years—from just under 18 per cent of GDP in the late 1990s to just over 14 per cent now—was precipitated by Liberal tax cuts. Which is to say, Stephen Harper is not so much introducing an entirely new view of taxes so much as he is extending an ethos.

It was Ronald Reagan who, in his inaugural address of 1981, declared that “government is not the solution to our problem; government is the problem.” Americans for Tax Reform, and its Taxpayer Protection Pledge (which asks politicians to commit only to ever cutting taxes), came into existence five years later. The Canadian Taxpayers Federation (CTF) was formed four years after that. By 2013, Alex Himelfarb, a former clerk of the privy council, was moved to compile a defence of taxation: Tax is not a four-letter word. “We in Canada, as elsewhere, were having a dangerously distorted conversation about taxes,” he wrote recently. “We seemed to welcome every new tax-cut promise—and just about every politician was offering us just that: more tax cuts, more change in our pockets. But we embrace these promises, vote for them, without asking ourselves or our political leaders just what we were losing with these cuts.”

Tax aversion is perhaps best exemplified by the debate about climate change, in which opposition to using a carbon tax or cap-and-trade system to establish a price on carbon seems presaged on the idea that greenhouse-gas emissions can be substantially reduced at no great cost. But, so far, there also seems no great outrage over whatever has been cut as a result of lower taxes at the federal level—only skirmishes over relatively small changes, such as the Harper government’s closure of nine Veterans Affairs offices. That might be because no comprehensive analysis of the federal government’s efforts to reduce expenses has been published, but it is surely a victory for frugality that some $14.6 billion in annual restraint does not yet seem to have been noticed by the vast majority of voters.

Earlier this month, I asked Aaron Lee Wudrick, federal director of the CTF, whether it would, ideally, like to see all taxes eliminated. “No. We’re not anarchists,” he said. “Governments need some money; we understand there needs to be at least some taxation. We just want to see it at a low level, fairly applied, with the revenues used efficiently.” Efficiency is a lovely, if sometimes unrealistically applied, idea. Last year, the New York Times’ David Leonhardt dared suggest that the U.S. federal government could be considered the “most successful organization in modern history” and the same could probably be argued of the Canadian government. But every $16 an MP expenses for a glass of orange juice—every auditor general’s report, for that matter—and every personal experience with a frustrating degree of bureaucracy, can suggest otherwise.

For the sake of efficiency, the Harper government’s restraint has not quite been matched by a commitment to carefully and openly examine and measure the impact of government programs and grants. But that sort of data-based governance has been invoked as the future, and it might also be a liberal response to the conservative urge to cut taxes. In an essay last year for Politico, Chrystia Freeland, the Liberal MP, argued that progressives needed their own Reagan. “Progressives won’t win public support for that pendulum swing if their promise is merely to make government bigger,” she wrote. “The goal must be to make it better—and fit for the new demands of the 21st century.” Her party’s leader, Justin Trudeau, has since made interesting noises about data-based governance.

Anyone hoping to do more with government might benefit from demonstrating that government can do things well. But measuring suggests accountability. Failures might be exposed, and any cut to a program has the potential to stir complaint from advocates, no matter the evidence. But some kind of reckoning for the modern state might be inevitable. The parliamentary budget officer has estimated that the federal government’s finances are currently sustainable over the long term, but that, as a result of an aging population, all other levels of government are collectively facing a fiscal gap of $28 billion. The so-called infrastructure deficit has been estimated at something like $123 billion. Climate change, despite the Prime Minister’s best efforts to claim that action can be taken at little to no charge, will cost something to deal with. At some point, our desire to pay less might come into conflict with our want or need to get something.

Even still, it is easy for the Conservative party to promise lower taxes, as long as someone is suggesting higher taxes. Maybe only an anarchist would suggest eliminating all taxation, but what if someone simply took the Prime Minister’s principles about taxation and who your money belongs to and simply proposed to cut even further? At what point would Stephen Harper find himself moved to defend the potential goodness of taxes?