Michael Ignatieff: Oakville and everything after

WHERRY: 'His aides have stopped giving him a script' 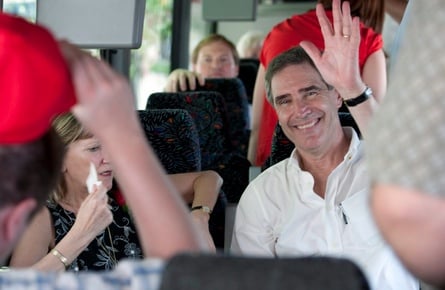 About a half hour into an event in a courtyard in downtown Oakville, a middle-aged woman fainted. A doctor in the crowd stepped forward to attend and an ambulance was called. She was out for a minute, then opened her eyes. Michael Ignatieff who had been shaking hands and posing for pictures, came over to check on the woman, holding her hand for a bit, then comforting her husband. The paramedics put a brace around her neck, then lifted her onto a backboard and carried her away.

After the ambulance had departed, Mr. Ignatieff was introduced by the local candidate and took the microphone. He spoke of the woman and the paramedics and turned the moment into an example of public service and compassionate government and then proceeded with easily the most impassioned call to arms of these three days—his tone turning nearly to a yell, periodically sounding something like a growl.

His aides have stopped giving him a script. He takes the stage with a small card on which are written the names of those in attendance he needs to thank, but otherwise he just talks. The basic ideas are the same each time—Stephen Harper is a power-hungry authoritarian who disrespects everything and everyone who would impede his personal ambition, Michael Ignatieff is an open-minded, compassionate man who wants to bring the country together for common cause—but the phrasing and the sequence are left to chance and whole new tangents periodically come up. This is probably for the best. Ultimately this is likely both practically and politically a good thing. But it won’t always work and it doesn’t always work. Mr. Ignatieff is a natural rambler, he has perhaps never answered a question in anything less than a dozen mutliple-clause sentences. This morning, for whatever reason, however tenuous his segue, he got rolling and found some kind of momentum and suddenly the sentences were stringing together like he’d been practicing this sermon his entire life.

He went then to Mississauga for Muslimfest, where the crowd, some of whom were eating lunch, some of whom were chasing children, wasn’t much interested in speeches. He was fine, if decidedly unremarkable. The mayor—Hazel McCallion, who has been in office since Confederation—followed and fared better with a series of cheerleading applause lines delivered like the unapologetic grandmother she essentially is (“I love my Muslim people,” she happily proclaimed).

Then to downtown Toronto for the end of the Caribana parade—the scene a blur of sequins and flesh and feathers. Mr. Ignatieff watched for awhile and then went in, walking the parade route, exchanging handshakes and high-fives and fist bumps. The music swallowed everything up, the bass pounding relentlessly, and the people were warm and Mr. Ignatieff grinned widely. A man in a silver dragon costume gave him a thumbs up. A scantily clad dancer blew him a kiss. On a couple of occasions, he danced. People in the stands waved. Afterwards there were more handshakes, more pictures. Then it was back into a waiting car, bound for the airport. He’s due at a Tim Horton’s in Grand Falls, New Brunswick tomorrow morning at 9:15.