Harper and Obama have a lot in common. Which is part of the problem. 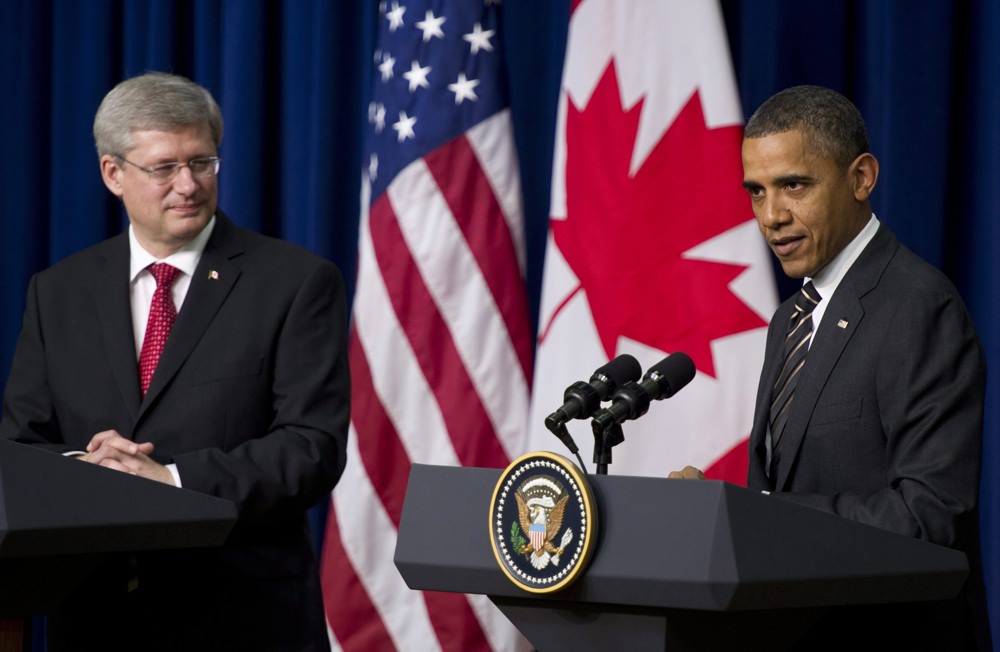 Edward Greenspon celebrates his arrival at Bloomberg by acting as foreman for a thoroughly team-reported exposé on the Harper-Obama dance marathon over Keystone XL. Apparently Obama surprised Harper with his first decision to punt a decision on approving the pipeline project. Apparently Harper responded by publicly needling the President of the United States. Apparently that didn’t produce optimum results. It’s compelling reading, without being all that surprising. Who still thinks these two guys get along?

And yet as relatively recently as January 2011, when we had one of our CPAC Coyne/Wells town-hall things in Washington, D.C., I was a bit of an odd man out for suggesting there was something wrong in Canada-U.S. relations and that it started at the top. Brother Coyne seemed amazed that I could be so pessimistic. Here’s a relic from those days.

Then several months later Obama punted on KXL and the rest is history, or would be if the damned saga would ever end. One amusing part of the reaction to today’s Bloomberg thumper is that much of the reaction — in the online comments and on Twitter — is from readers who see the story as evidence that so-and-so is a lousy leader. Except they can’t agree on the identity of so-and-so. Obama’s a ditherer! Harper’s a passive-aggressive taunter!

Wait, you’re both right. I read the Bloomberg report with mounting relief because it matches the account in my recent book, although in much greater detail. To me, Harper and Obama got off on a very bad foot and have never recovered. Never bothered to try to recover, really.

When Obama made his first foreign trip, to Ottawa early in 2009, the Harper PMO had high hopes the two men would get on: they diverged on politics, of course, but they were of similar age, they had young families and both had affected an outsider stance toward political culture in their national capitals. But Obama was busy with a domestic economic collapse, wars in Iraq and Afghanistan, and health care reform. There could be no enhanced Canada-U.S. bilateral relationship unless Harper had some joint project to propose. (This is always the way it goes: Ottawa tugs at Washington’s sleeve or winds up ignored.) And he had none. Obama quickly shunted Canada from Low Priority to Very Low Priority. Everything since has flowed from that awkward beginning.

What’s striking about these two is how similar they are. Neither is a hugger. Where Mulroney and Clinton and Nixon and Chrétien, each in very different ways, had strong bonds of friendship with a few foreign leaders, Harper and Obama don’t. Neither was very curious about the world before reaching positions of national leadership. Neither is fond of foreign travel.

Each man’s political roots are showing. Harper’s conservative base consists largely of people who get their U.S. political information from Fox News. The message you get from Fox News is that Barack Obama is not even a legitimately elected president. The Prime Minister is very good at writing people off, and he plainly wrote Obama off as a serious interlocutor long ago. That’s the only way to explain how he could seriously think calling KXL “a no-brainer” in a public appearance could actually substitute for a real plan to change Obama’s mind.

As for Obama, he rarely hears about Keystone in Washington except from the Republican leadership, which has been trying to destroy him for five years. Every time they read out those loony-bin lists of demands during the government shutdown — “Abolish the income tax! Repeal Obamacare! And get cracking on Keystone!” — I flinched a little, knowing Obama was watching on TV, muttering “Never. Never. Never.”