Of jobs and jets

COYNE on the F-35 controversy 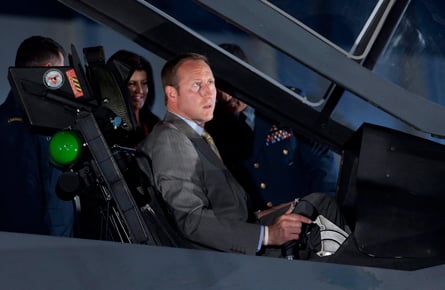 Minister of National Defence and Minister for the Atlantic Gateway Peter MacKay checks out the cockpit of the F-35. THE CANADIAN PRESS/Adrian Wyld

I’ll leave to others, at least for the moment, whether the F-35 contract makes sense in military terms: that is, whether this is the best expenditure of scarce defence funds. I remain to be persuaded either way. But  if the F-35 is so far superior to other planes as the government maintains, and if the benefits in defence terms are worth the extra dollars, then I think the contract can be defended, notwithstanding the absence of competitive bidders. You can’t have a competition for something that’s only made by one firm.

As I say, I’m keeping an open mind on its military merits. All I would suggest is that that is how any such purchase should be assessed — based on its costs and benefits in military terms, and not on the basis of its so-called “industrial benefits.” Indeed, that is the best thing about the contract as signed: it doesn’t have any “industrial benefits.”

That is, not as that phrase is used in procurement jargon: a requirement imposed on the contractor to set aside a certain portion of the subcontracting work for Canadian firms. Remarkably, the government has eschewed any such requirement in the deal — remarkable, both because defence contracts are usually riddled with such protectionist riders, and because this government has not previously shown much aversion to pork-barrelling.

Why are these a bad idea? The same reason as protectionism is generally. You don’t make yourself rich by paying too much for things, any more than you do by selling things for less than they cost to make — as in that other favourite tool of industrial interventionists, subsidies. “Buy low, sell high” is the recipe for prosperity, not “buy high, sell low.” The only reason to require a contractor to source from Canadian firms is if they would not do so willingly; the only reason they would not do so willingly is if the Canadian firms were not the most cost-effective option; and so the effect of such set-asides must be to inflate the cost of the contract. If the government were purchasing from these sub-contractors directly, that would be obvious enough. But it doesn’t change with the intervention of an American aerospace firm as the middle-man.

But what about all the extra economic activity so generated? If the government is going to spend all that money anyway, doesn’t it make sense to spend it in this country, creating jobs here rather than elsewhere? And won’t the extra taxes from all that additional output offset any extra costs?

The key to this enduring fallacy lies in those words “extra”, “additional.” The assumption is that productive resources are somehow called into existence by the government’s willingness to spend money on something. But that’s not the case. They are not created; they are diverted. The resources used to make parts for planes might have been used for other purposes. They are only diverted into aerospace by the availability of subsidy (in this case, the difference between the Canadian subcontractors’ costs and their foreign competitiors). Were there no subsidy, the same resources could be put to other uses, offering higher economic returns — and sending higher tax revenues back to the treasury.

How do I know they would offer higher economic returns? Because they don’t need a subsidy: that is, they offer a greater benefit to society, in terms of the price consumers are willing to pay for them at the margin, than they cost society to make, in terms of the resources they consume in production. Whereas subsidy only becomes necessary where the reverse is the case: where the costs to society exceed the returns. I say “society,” because that’s ultimately what’s involved. We may assign private title to these resourced, but ultimately they are society’s, in the sense that they must all come out of the same pot: one person’s use of a scarce resource leaves that much less for everyone else.

This is as true of labour as anything else. A widget firm is in the business of making widgets, not jobs. Jobs are not the product: they’re the cost. Likewise for military jets. The fundamental objective of the government should be to get the best jets for the lowest price — not to “create jobs.”

A final point. As I said off the top, I don’t know whether the jets are worth the price. Maybe the contract should have been put out to competitive tender. We’ll see. But it’s utterly incoherent of the Liberals to argue, on the one hand, that the government is paying too much for the jets (because of the lack of competitive bidders) and that it is not paying enough (because of the lack of domestic content quotas). Pick one!