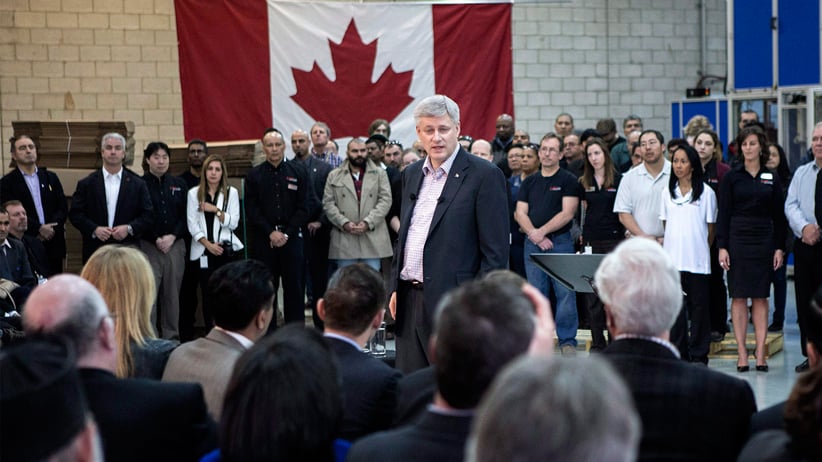 The prime minister’s travel agenda these days is a neat package of taxpayer-paid photo opportunities paired with Conservative rallies — a popular twofer in Canadian politics.

Tom Mulcair, leader of the official Opposition also travels across the country using his House of Commons budget.

Folks around Ottawa will say it’s been ever thus, piggybacking a political event onto one covered by the public purse. Which event was planned first is a chicken-and-the-egg type question that is never quite spelled out.

But these days the matter of what constitutes legitimate official travel for parliamentarians is facing scrutiny in an Ottawa courtroom.

Among his defences is that he did attend public events during those trips to deliver speeches for the local MP — meeting local mayors or a human rights activist, for example.

He also argues that partisan activities are a part of a senator’s core functions.

Harper’s travel last week included a mix of photo opportunities and political get-togethers. Some of his public events are not open to the media.

He participated in a roundtable Wednesday night with business leaders in Windsor, Ont., followed by a reception with the newly nominated local Conservative candidate and other supporters. Thursday morning there was a Windsor event highlighting the yet-to-be-passed budget proposal for an accelerated capital cost allowance and another to name the planned bridge between the city and Detroit.

The opposition leaders also travel on the public dime and wind up at party events during their voyages.

Mulcair spokesman George Smith says the party pays for some, but not all, of the costs of the leader’s trips. Between April-December, 2014, the Montreal-based MP spent $45,520.33 in travel, according to his public disclosures.

To date, Liberal Leader Justin Trudeau’s public disclosure shows no travel expenses for last year under the Commons budget, but some trips have not yet been logged.

“Only trips that are undertaken in support of parliamentary duties are charged to the House of Commons. Mr. Trudeau feels very strongly about keeping parliamentary and party expenses separate.”

Alberta’s auditor general slammed former premier Alison Redford for travelling on government planes to party events, without also coupling them with official business. The RCMP did not lay charges in that case.

Jeff Bowes, research director for the Canadian Taxpayers Federation, said leaders can do what they want on their own time — including a partisan event. When events are combined, it’s more difficult to figure out which came first.

“Determining the details in each individual case is a little complicated but the primary purpose has to be government business, or they should be repaying the taxpayer for the expense of the travel,” Bowes said.