Oil tensions and trade anxieties in Parliament? This all feels familiar.

The top issues of the 1980s get a reprise as Parliament resumes, with opposition leaders deploying some retro framing 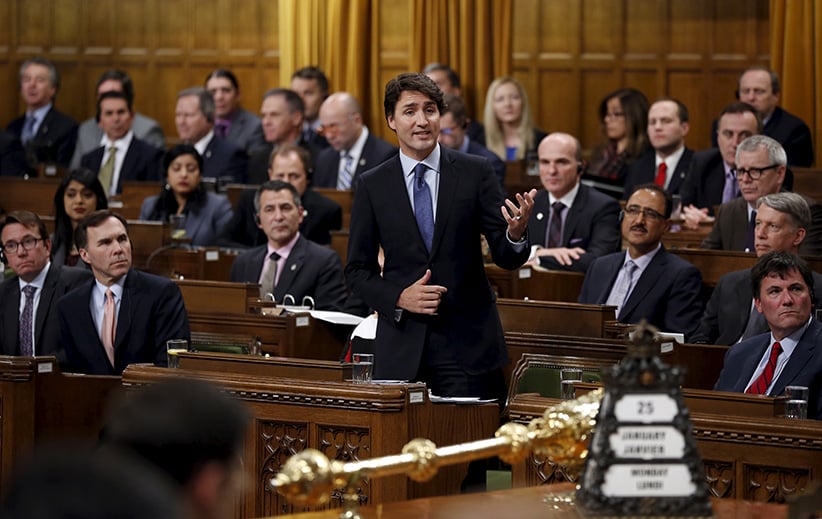 There was the promise of invigorating debate in the air as Parliament resumed sitting today. The brief return of MPs in early December was a mere getting-to-know-you opportunity for Justin Trudeau’s newly elected Liberal government; this week felt more like getting down to work. But from a wide array of tempting policy arguments, which would dominate?

Rona Ambrose, the interim Conservative leader, held a news conference to flag her top concern: She warned of a threat to national unity over growing resentment in the West about lack of support for new oil pipelines in the East, especially from Liberals. Ambrose said folks in Alberta and Saskatchewan tell her the situation is “just like the NEP—that’s what they say,” referring of course to the reviled National Energy Program of 1980-85.

When NDP Leader Tom Mulcair’s turn came around in question period—where he’s usually at his best—he took aim at International Trade Minister Chrystia Freeland, over her announcement that she will travel to New Zealand early next month to sign the Trans-Pacific Partnership, the 12-country trade deal negotiated by the previous Conservative government. Mulcair said the TPP would “kill 58,000 Canadian jobs, weaken supply management, hurt our auto sector, and put Canadian innovators at a competitive disadvantage.”

So the day was about regional tensions over oil and ideological divisions over trade. Like somebody once said, welcome to the 1980s.

It’s not that those two subjects aren’t, broadly speaking, as urgent now as they were three decades ago. But the way the opposition leaders framed them seemed stale. Ambrose took aim at Trudeau for, in her view, failing to defend Canada’s resource sector—oil pipelines in particular—last week at the World Economic Forum in Davos, Switzerland. “I haven’t heard him once say that these are important projects for the economy, or that these are important projects for the country,” she said.

Yet Trudeau didn’t dodge when he was asked at Davos about the war of words between Montreal Mayor Denis Coderre, who is against the Energy East pipeline, and Alberta Premier Rachel Notley, who is for it and has even coaxed Ontario Premier Kathleen Wynne closer to backing the project. “I am solidly in one camp on this one,” Trudeau said. “I am very much in the camp of both premiers, Wynne and Notley, who demonstrated that Canada can and should work together on economic issues for all of us.”

Natural Resources Minister Jim Carr is Trudeau’s point man when it comes to figuring out a federal approval process for pipelines that will somehow satisfy those who oppose them on environmental grounds or because First Nations haven’t been properly consulted.

How he’s going to manage that trick is hard to guess, but Carr was on his feet a lot today in question period, and came awfully close to guaranteeing a process that gives proposed pipelines to the Atlantic or the Pacific a strong chance of the regulatory green light. “We’re talking to Canadians now,” he said, “and what comes after these consultations will be Canadians confident in delivering these resources to market in a sustainable way.”

That Trudeau and Carr are so clearly sending upbeat signals about pipelines is not really surprising.  Trudeau has taken pains to distance himself from his dad’s NEP, going back to 2012, when the first stop of his Liberal leadership tour was in Calgary, where he vowed he’d “never use the wealth of the West as a wedge to gain votes in the East.” In recent days, top federal officials have also strongly hinted that Finance Minister Bill Morneau’s upcoming federal budget will contain targeted measures to support the provinces hit hardest by the oil price plunge.

Unless Trudeau and Carr utterly fail to solve the pipeline issue, and Trudeau and Morneau fall far short on helping out Alberta in the budget, Ambrose is going to have to come up with a new line of attack. Similarly, Mulcair’s emphasis on opposing the TPP as bad for Canada sounds too much like a fading echo of the epic 1988 Canada-U.S. free trade clash, or the NAFTA reprise that followed.

Canadians have long since learned that those earlier big trade deals didn’t wreck the economy, so the case for the TPP (like this one from University of Western Ontario economist Mike Moffatt, who disputes in detail some of the dire warnings about the threat to Canadian auto-sector jobs) builds on the now widely accepted notion that it’s generally better to be inside trade pacts than outside them.

None of this means the Liberals aren’t vulnerable on lots of policy files. Some were even touched on today. Where’s that plan for stepping up Canada’s contribution to the war on terror while withdrawing our fighter jets from action against the so-called Islamic State? Will Morneau map out a plausible path for big deficits now but a return to balanced budgets again in only a few short years? Can a welter of promised consultations of various sorts on electoral reform, medically assisted dying, Indigenous issues, greenhouse gas emissions, federal funding of health care, and more, all be guided simultaneously in the next few months to productive conclusions?

There are no shortage of issues to start sustained arguments about on Parliament Hill—once the ’80s throwbacks are out of the way.