With the acquittal—and imminent return to work—of Sen. Mike Duffy, the upper chamber readies itself for a new role 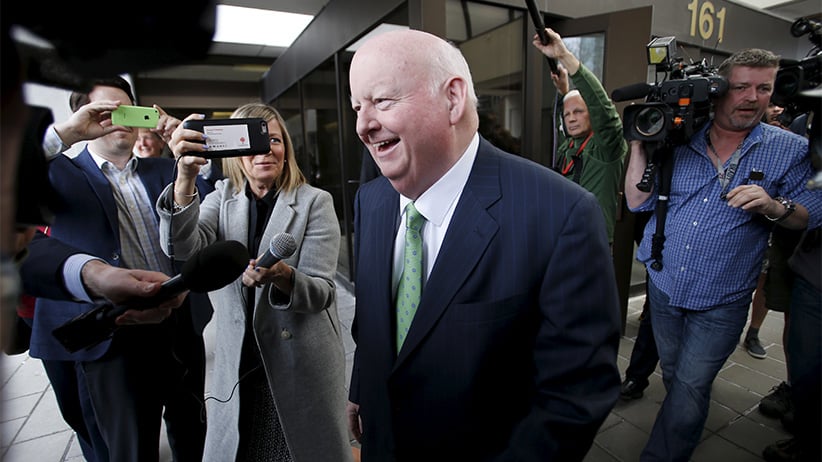 Senator Mike Duffy leaves the courthouse after being cleared of bribery and fraud charges in Ottawa on April 21, 2016. (Chris Wattie/Reuters)

Ever since senators voted to suspend Mike Duffy without pay on Nov. 5, 2013, his office in a hallway just off the Senate chamber has been an unsanctioned stop on informal tours of Parliament’s Centre Block. The brass plate bearing his tarnished name remains on the door. Beside it stands the Prince Edward Island flag, a reminder of the controversy over whether Duffy could legitimately claim to represent P.E.I. when he mostly lives in suburban Ottawa. The office itself has been dark and silent.

The nameplate and flag were pointed out to visitors as sad vestiges of what seemed to be a thoroughly demolished career. After all, no less an authority than Hugh Segal, then among the most respected senators, now retired, said on the day Duffy was suspended (along with Pamela Wallin and Patrick Brazeau) that the likelihood they would ever sit again in the Senate was “zero.” Segal, the only Tory senator who voted against kicking them out, declared, “This is a virtual expulsion.”

His assessment sure seemed plausible at the time. But Wallin quietly came back to work at the Senate last fall, never having been charged with anything, despite an RCMP investigation into her travel expenses. And Duffy, as any Canadian paying the slightest attention to the news learned last week, was found not guilty by a judge on all 31 charges involving his Senate housing, travel and office expenses. By early this week, newly delivered computer equipment was stacked at his office door, awaiting his highly anticipated return.

Some senators who were against Duffy back in 2013 were having second thoughts after his triumph in court. “I was one of those that voted for his expulsion,” said Sen. Leo Housakos, the Conservative chairman of the Senate’s powerful internal economy committee. “But maybe some of us have to reflect and contemplate that we were a little bit rash in judgment.” By way of explanation, he added: “We gave in to pressure from the media, and the media has a great deal of power and influence in driving parliamentarians.”

However, the glare of bad publicity was also a driving factor in what Housakos touts as a long-overdue updating of accountability mechanisms when it comes to senators’ spending over the past three years. “In 2016 and going forward, there’s a new Senate,” he said. “That [means] tighter rules, less ambiguous rules, and a more thorough commitment to more accountability and oversight.” Some of those new rules are already in place, while others are still in the works.

Housakos pointed to 2014 reforms that gave the Senate ethics officer more independence and a broader scope. Senators already post quarterly reports online that detail their expenses, but Housakos said a new online platform is being created that will soon standardize how they disclose spending and make details available more quickly. By summer, he said, his committee hopes to have set up a new subcommittee, with input from independent outsiders, with the power to review senators’ expense claims.

Narrower measures taken after the eruption of the expenses controversies in 2013 included no longer allowing senators to expense business-class flights in between Ottawa and Toronto or Montreal. As well, the Senate used to reimburse taxi rides under $30 without receipts, but now requires them. And senators must also provide proof every year of where they live, a key question when it comes to allowing or disallowing housing expenses. “It’s something that’s not so easily defined, as we found out before a court of law,” Housakos said, referring to legal wrangling about Duffy’s home in Ottawa and cottage in P.E.I.

Some senators fear Duffy’s return to the Senate will overshadow all these reforms. But Manitoba Tory Sen. Don Plett, who argued against suspending Duffy and the others on the grounds that they hadn’t been granted due process, said he hopes the Canadian public will be sympathetic. “The man has been brought down as low as somebody can be brought down,” Plett said. “That alone, for somebody who is innocent, is quite a punishment.”

Beyond Duffy, the cases of other senators still have potential to reignite public umbrage. It remains to be seen, though, how the judge’s ruling in Duffy’s case might affect the pending trials of Brazeau and retired senator Mac Harb, both charged in relation to housing and living expenses, or a handful of other cases of allegedly inappropriate expenses sent last year by auditor general Michael Ferguson to the RCMP for possible investigation. The Duffy experience is bound to prompt police and prosecutors to proceed cautiously, if at all.

Related: The revenge of Mike Duffy

Arguably even more fundamental than spending and ethics is the issue of whether an appointed Senate can carve out a respectable role in a democracy. The Supreme Court of Canada effectively put an end to the notion of quick, decisive Senate reform in 2014, when its judges ruled unanimously that then-prime minister Stephen Harper couldn’t push ahead with his plans for electing senators and subjecting them to term limits, without securing the support of at least seven provinces representing 50 per cent or more of Canada’s population. (Abolishing the Senate, the court said, would require, under the Constitution, unanimous consent from the provinces.)

But Justin Trudeau had already begun moving, before the court ruled, on a Senate reform track that doesn’t require constitutional negotiations with the premiers. Back in early 2014, he kicked Liberal senators out of his parliamentary caucus, and promised that a Liberal government would bring in a non-partisan appointment process. As Prime Minister, he established, as promised, an independent advisory board late last year to propose candidates he could put in the Senate. Last month, Trudeau appointed seven senators from the first list of 25 names sent to him by the board.

The new senators sit as independents in the upper chamber. But one of them, former senior bureaucrat Peter Harder, Trudeau designated as his “government representative” in the Senate, a job that has never previously existed. Essentially, Harder is charged with trying to shepherd the Liberal government’s legislation through the upper chamber. His role is unusual, given that those Liberal senators Trudeau cut off from his caucus back in 2014 still consider themselves Liberals and continue to function as a group.

Their chosen leader is Nova Scotia Sen. James Cowan. He argues the events of the past three years have left senators more certain than ever of their responsibility to “bring a different set of eyes to the activities of the government.” That means when the House sends bills to the Senate to be passed into law, the Senate will more often send that legislation back with proposals for changes. “The Prime Minister has said that he wants the Senate to be more independent,” Cowan said. “I think that will embolden the Senate to make amendments appropriately.”

The new relationship between House and Senate is being strained by the government’s legislation to allow physician-assisted dying. Time is tight: the Supreme Court, which last year struck down the ban on doctors helping those suffering “grievous and irremediable” conditions to commit suicide, has given Parliament until June 6 to pass a law. But some senators, including Cowan, think the bill Trudeau’s government drafted is too restrictive.

Cowan contends the Senate has the right to propose changes and the House has an obligation to consider them. “If, at the end of the day, they say, ‘Thank you very much for your advice, we don’t accept it,’ ” he said, “the Senate would cede to the House of Commons—but we’re a long way from there.” The stakes on assisted dying are so high that even Duffy’s return might not draw attention entirely away from what’s shaping up as a landmark test of a changed Senate in action.