O'Leary's campaign chair: Tories need a unifier, not a disruptor 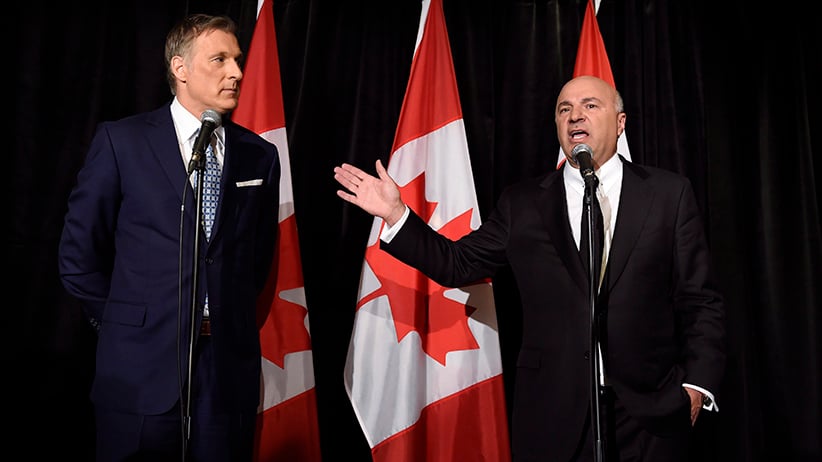 Kevin O’Leary’s surprise exit from the federal Conservative leadership race sparked instant arguing among Tory insiders over their widely varying estimates of how many of the reality TV star’s big block of supporters will now follow his advice and switch their allegiance to Quebec MP Maxime Bernier.

But Mike Coates, the veteran party organizer and fundraiser who served as O’Leary’s campaign chair, says he is sure, based on the campaign’s own surveys of the intentions of O’Leary’s declared supporters, that about half of the roughly 35,000 new members he signed up were already planning to make Bernier their second choice.

“I don’t have to speculate,” Coates told Maclean’s in an interview this afternoon. “We know that somewhere around 50 per cent of our support was going to go to Max Bernier on the second ballot. So now, with Kevin’s endorsement—and remember those 35,000 [new members] really came in because of him—I would say it’s going to be north of that, could be as much as 60 per cent.”

Before O’Leary rocked the race by quitting today, he and Bernier were generally considered to be neck-and-neck at the front of the crowded 14-candidate pack. Jason Lietaer, a veteran Conservative strategist who hasn’t declared his support for any the leadership aspirant, says Bernier now looks most likely to win—but can’t yet be seen as a sure thing.

“We’ve gone from a two-person, co-leader race to a race with one clear leader. The dynamics change completely,” Lietaer says. “The anybody-but-Bernier camp is now viable, if it coalesces around a clear favourite.”

In stepping aside, O’Leary admitted that he had failed to gain much support in Quebec, where his inability to campaign in French made him untenable. As well, sources close to him said he was shaken by how polarizing his candidacy had become.

Second choices are enormously important in the Conservative leadership race, since it is being decided by a complex preferential ballot system. Party members will rank their choices from one to 10, with the bottom vote-getter dropped off, and second-place votes redistributed until one candidate has a majority. Mail-in ballots will be counted in Toronto on May 27.

Along with whatever slice of his supporters decide to follow him to Bernier, O’Leary’s impact might be felt if his larger-than-life persona remains a factor in the final weeks of the contest. “Kevin is prepared to help [Bernier] in any way he can, and use his very large media and social media profile, to help spread the word,” Coates says.

It was O’Leary’s fame that made him such a formidable figure in this contest, even though he had neither roots in the Conservative party nor experience in Canadian politics. Lietaer says his persona, established on the TV show Dragons’ Den in Canada and Shark Tank in the U.S., made him a huge factor.

“The truth is that he was one of the best prospective candidates that you could imagine for any political party,” Lietaer says. “He should have won this thing. He should have been able to be the second choice of a lot of people.”

Coates said he thinks O’Leary was still well positioned to win. But he noticed late last week that his candidate’s enthusiasm for the race wasn’t holding up for the stretch run. Days of private discussions with his core campaign team followed. Finally, late yesterday evening, O’Leary spoke one-on-one with Bernier at Toronto’s Fairmont Royal York Hotel, to tell him about his decision to drop out.

Coates and several other serious Conservative party operatives had signed up to support O’Leary on the premise that the time was right for an unconventional leader who would shake up the party. Instead, Bernier’s deeper roots seem to have proven more valuable.

“I think the same conditions that brought Kevin in the race are here today, and that’s why a lot of people will be disappointed that he’s stepping out,” Coates says. “It’s just that he’s decided the party needs more of a unifying figure now than a disruptor.”