Who shot the Ottawa gunman?

Vickers' heroism is undoubted, but there were a 'multitude of shots' 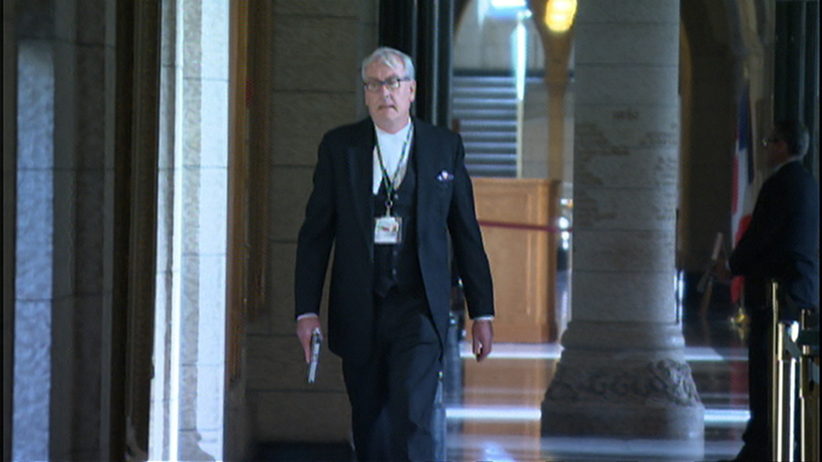 It is not clear that House of Commons Sergeant-at-Arms Kevin Vickers, who has been widely hailed as a hero for his bravery in confronting the attacker who stormed the Centre Block of the Parliament Buildings on Wednesday, fired the shot that killed Michael Zehaf-Bibeau.

Nobody who has watched video of the assault, or heard first-hand accounts, can question Vickers’s courage and composure. He is seen both in the dramatic, unsteady video that shows several security officers confronting and finally shooting Zehaf-Bibeau, and again in the clearer footage taken afterwards, his pistol in hand, when the possibility of another intruder hadn’t yet been ruled out.

But the official police account offered today leaves wide open the possibility that one or more officers not yet named might have killed Zehaf-Bibeau. And a least one NDP MP who was in the Centre Block at the time, and for hours afterwards, said he got the impression that a young Mountie assigned to the Parliament Hill detail might have fired the fatal shot.

RCMP Commissioner Bob Paulson was asked at a news conference earlier this afternoon to describe in detail what happened yesterday in the Centre Block’s Hall of Honour, and specifically whether it was indeed Vickers who finally shot Zehaf-Bibeau. Paulson’s answer was equivocal.

“That remains under investigation,” he said. “The best information that I have now is that as the suspect entered the doors there was an engagement with House of Commons and RCMP officers, some shooting occurred.

“The suspect transited from that engagement down the hall toward Parliament, at which point Mr. Vickers and others did engage with him. I understood that the suspect and Mr. Vickers were behind pillars and were exchanging fire; the suspect repositioned himself to get a better shot at Mr. Vickers when our [RCMP] officers engaged, and you may have heard the sort of multitude of shots.”

Paulson went on to praise Vickers and his team of House of Commons security officers as “heroes,” but also said his own officers and those of the Ottawa Police performed heroically.

Some MPs who were locked up on Parliament Hill yesterday after the shootings—during the long hours while police were making sure the slain attacker had left no accomplices hiding nearby—seem to have come away with the understanding that a young RCMP officer might have actually fired the shot that killed Zehaf-Bibeau.

NDP MP Paul Dewar said members of his party’s caucus were reassured shortly after the gunfire ended by a young officer who was impressively poised despite, having moments earlier, as NDP MPs were told, shot the gunman who had charged into the Hall of Honour outside their caucus room.

“He came in and told us what had happened, and he gave us a very calm briefing,” Dewar said. “He told us in very calm terms what had happened. He was reassuring us. He was a hero yesterday and I can’t thank him enough.” Dewar gave the name of a Mountie assigned to the Hill, but Maclean’s is holding off on identifying him since the RCMP has declined to comment on whether that individual was involved in the shootout.

Vickers has not made any claim about his own role. In fact, he has shared credit widely. “I am very touched by the attention directed at me following yesterday’s events,” he said in a written statement issued earlier today. “However, I have the support of a remarkable security team…”

He went on: “House of Commons Security Services also maintains a close working relationship with its security partners, including Senate Security, the RCMP and the Ottawa Police. This close collaboration made it possible to pull together and quickly restore order in the Parliamentary precinct and throughout the downtown core.”

A spokeswoman for the Speaker of the House of Commons, who also handles media requests for the Sergeant-at-Arms, said Vickers would not be answering any Maclean’s questions or responding to other media requests.