On electoral reform, Maryam Monsef wants to 'get this right'

This is not about partisanship, says the minister, as she puts Liberals in charge 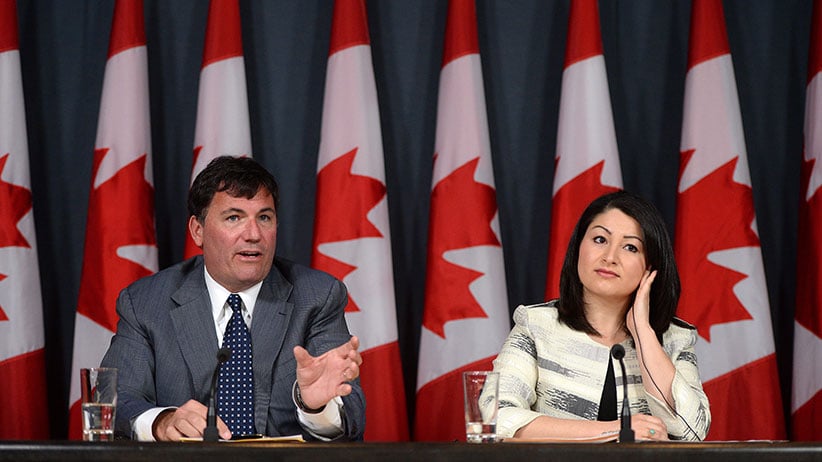 Maryam Monsef, Minister of Democratic Institutions, and Dominic LeBlanc, Leader of the Government in the House of Commons, make an announcement regarding electoral reform during a press conference at the National Press Theatre in Ottawa on Wednesday, May 11, 2016. (Sean Kilpatrick/CP)

“This is not about advancing a skewed partisan interest,” Maryam Monsef said yesterday as she announced a new parliamentary committee to discuss electoral reform. A majority of the members on the committee are Liberals, but you’re not being helpful when you point that out.

“We need to move beyond a system that pits neighbour against neighbour,” said Monsef, the youngest minister in Justin Trudeau’s cabinet but, I suspect, nowhere close to the most naive.

“In a multi-party democracy like Canada,” she said, “first past the post”—the system that gives each riding to the candidate with the largest number of votes, regardless of whether that candidate came close to winning a majority of local votes—”distorts the will of the electorate.”

“Our government believes all Canadians’ voices should be heard,” Monsef said. And: “We want to ensure that Canadians across our diverse society are involved in this historic change.” Does that include some Canadians in particular? It sure does. “This includes Canadians that often go unheard such as women, young people, seniors, Indigenous persons, new Canadians, those of modest means, those Canadians living in rural and remote communities.” Excellent. But beyond those groups, which together actually add up to a large majority of Canadians, is this process also about the rest?

It sure is. “We’ll be looking for opportunities to inspire all Canadians to vote and to be active participants,” Monsef said.

So. All Voices. Across our diverse society. Because the current system distorts the will of the electorate. To avoid pitting neighbour against neighbour. Because skewed partisan interests are not what this is about advancing. Gotcha.

Onward to questions from the surly gallery. Here was the second: “You’ve got a committee with 10 members and I think you’ve got six.” “You” in this sentence means the Liberals, which I suppose is true if you insist on taking a skewed partisan interest. “It looks like you hogged all the seats. So how is it not skewed?”

Monsef: The committee “reflects the composition of the House of Commons.” With bonus added diversity, in the form of Bloc and Green MPs who will not have voting privileges but will be welcome to listen and talk.

More questions from the surly gallery, this time in French, which were taken by Monsef’s colleague, the government House leader Dominic LeBlanc. One question was on referendums. “The referendum question is much like putting a cart before the horse,” Monsef said. “Right now our priority is hearing from a broad range of Canadians from across the country. I’m particularly interested in hearing from those Canadians who don’t normally engage in the democratic process and don’t normally vote.”

This was all Kabuki theatre. The party composition of the committee matters because the main parties have different ideas about how, or even whether, reform should happen. Justin Trudeau knows this. He even apologized to the Commons last week for suggesting his opponents’ views have slowed down his government’s consultations.

Related from Maclean’s: Do the Liberals have a mandate for electoral reform?

Most Liberals like a preferential-ballot system, in which you rank your choices, because many voters who prefer a specific party to the Liberals’ left or right will list the Liberals as second choice. This would tend to encourage Liberal majorities built, in large measure, from shrugs and why-nots.

The NDP, with a disproportionate number of support from voters who would shrug and why-not the Liberals on their undercard, prefers a proportional system in which first choices would count and endure.

The Conservatives, who won three elections on splits, the way elections are usually won in this country, don’t like any of this talk. They want the people to decide, in a referendum, essentially rediscovering the Reform Party’s taste for popular democracy after Stephen Harper low-bridged that element of his Conservative party’s heritage for a decade.

Related: The quagmire of electoral reform and the hunt for legitimacy

Now, here’s the thing. Each of these positions is legitimate, in the sense that each position protects some values while giving others short shrift. A ranked ballot would be simple but it’s bad at ensuring diverse opinions get represented in the House. (As long as you represent the big non-diverse opinion a ranked ballot tends to lift up, you like this result, and you view it as “not advancing a skewed partisan interest.”) Proportional representation lets a hundred flowers bloom but it can be hard to explain to bored or distracted voters (who are, incidentally, allowed, in a democracy, to be bored or distracted; and in any case are hard to excite or focus). Referendums do give each voter a voice, although that doesn’t make them perfect: they’re best only for simple choices, and by that same token they can exaggerate, and worsen, regional differences.

It would be really excellent if Canada’s minister of democratic reform would demonstrate an understanding of these disputes. I promise you this one understands them very well. I’m not even entirely sure she has cooked this process to produce the Liberals’ favourite outcome, although one notes that everything in this process makes the Liberals’ favourite outcome the likeliest.

But the minister’s determined insistence that there is (on one hand) a commonly accepted common interest and (on the other hand) no particular need to put that notion to a population-wide vote, produces a paradox: She seems so nice. And she is acting the way someone would act if she were trying to pull a fast one.

Will she act on the committee’s recommendations or will the cabinet do what it wants? “The feedback we receive from the committee will be invaluable.”

Yes, but once the committee reports, who will have the final say? “The final decision will be a decision made by 338 MPs in the House of Commons, and then Senate will have an opportunity to review the legislation.”