On slaying deficits and what to do next 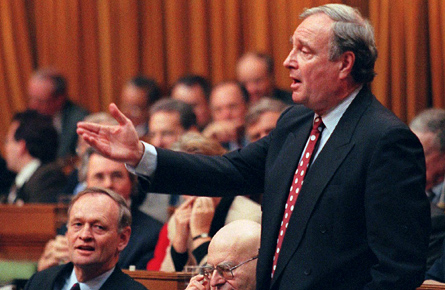 The Don Drummond interview I posted earlier has prompted a bit of discussion about how any federal government will dig its way out of today’s alarmingly deep deficits.

Drummond deftly sketches how hard it will be to balance the books without touching the wide areas of spending now deemed sacrosanct—payments to seniors, to provinces, to fund the military.

Indeed, Finance Minister Jim Flaherty has vowed not to touch transfers to the provinces. And Prime Minister Stephen Harper and Liberal Leader Michael Ignatieff alike have promised no tax hikes.

I’m skeptical about how any plan with those sorts of conditions attached could possibly work, but I’m trying to keep an open mind. Meanwhile, it might help to think back on how the Liberals actually managed to slay the deficit back in the 1990s, and what they did next.

Tories like Flaherty bitterly slam the Grits for balancing the books back then by slashing transfer funding to provinces for health and education. Liberals tend to go all glassy-eyed and vaguely allude to some sort of fiscal-management genius that manifested itself back in the Chrétien-Martin heyday.

There’s some truth to both partisan perspectives. Considerable temporary pain was inflicted on the provinces, and the Liberals of the day did display a good deal of discipline. Still, I think the saga is widely misunderstood.

Here’s what I would argue really happened. Martin mapped out his fiscal strategy in the 1995 and 1996 budgets, setting a target across all federal departments of 22 per cent less spending by 1998-99 than in 1994-95.

But that never happened. It didn’t have to. Instead, total program spending declined just six per cent in the crucial five-year period—substantial but not nearly as painful as legend would have it. So why did the deficit vanish? The main reason: tax revenues soared by 26 per cent from ’95 to ’99, thanks to steady, strong economic growth.

In other words, a powerfully expanding economy, combined with reasonable spending restraint, did the trick. What’s too often forgotten in recounting of the deficit-slaying story is what the Chrétien Liberals did—and did fast—once they had the government back in the black.

In the 1999 budget they dramatically boosted transfer payments to provinces, effectively reversing the cuts of the previous few years. For example, health-care transfers were restored to pre-1995 levels.

In 2000 they embarked on a sweeping five-year tax cutting plan, including a landmark move to full indexation of personal taxes, which meant inflation would no longer amount to a tax hike.

I would argue that those two budgets offered clear evidence of priorities not often associated with the Liberals. Did they greet the end of deficits mainly as a chance to greedily expand federal range and reach? No. They first looked to restoring the provinces’ ability to fund health and education, and then to cutting personal and corporate taxes.