On the elimination of inconvenient Liberals

Paul Wells: Welcome to an offensive on Charter rights—This was the week it became necessary to destroy the village of good government in order to save it. 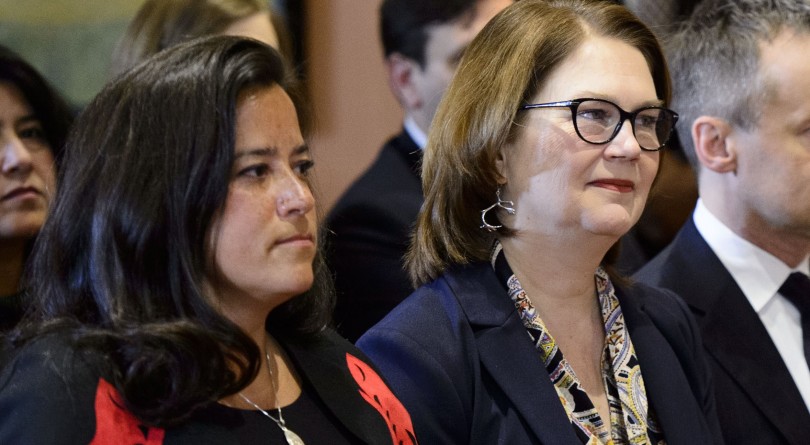 Philpott, right, with Jody Wilson-Raybould at Rideau Hall on the day of the cabinet shuiffle last month (THE CANADIAN PRESS/Sean Kilpatrick)

We have learned so much. Within minutes Monday afternoon, two good reporters had stories (here and here) about the Chief Justice of Manitoba, who was a candidate to be Chief Justice of the Supreme Court of Canada and who, later, wasn’t. Both reporters unfurled similar yarns about a lone Prime Minister standing athwart the tide of conservatism by blocking—shudder—a Harper appointee from sitting on the top court. Jody Wilson-Raybould plays the role of villain in the piece.

Both reporters decorously neglect to mention that Trudeau’s choice for Chief Justice, Richard Wagner, was a Harper appointee.

There are many things we can say about this story, working outward in concentric rings from the thing itself. First, Glenn Joyal’s views, as expressed in speeches that were said to alarm the prime minister, are almost comically orthodox. I first became aware of the notion that Charter litigation systematically airlifts important matters from the parliamentary arena and into the realm of jurisprudence in a Chantal Hébert column in the late 1990s. If I had paid more attention to literally any of my Canadian public administration profs a decade earlier I would have caught the argument then, because it is canvassed in every Canadian political science class. This is not wild-eyed Hayekism.

Second, perhaps the many thousands of Canadians who have applied for federal government appointments under what they thought was a confidential process, introduced by this prime minister, will want to contemplate a class-action suit against him. Because it is now radiantly clear to each of them that their CV is being held hostage by a claque of embattled sorcerers’ apprentices who will cheerfully wheel it over the transom to any waiting scribe if anything about them—their opinions, a fallen political star’s unfortunate decision to argue for their advancement—becomes politically inconvenient. This is the very stuff of the police state.

It was immediately fashionable to wonder on social media how everyone would react if Stephen Harper had done such a thing. It’s germane to note that Stephen Harper never did. Because he had more class. Welcome to the Tet offensive of Charter rights: This was the week it became necessary to destroy the village of good government in order to save it.

Third, Justice Joyal’s wife was in poor health. Apparently we are to believe that 9,000 jobs depended on your knowing that.

If the Trudeau government is not the source of the leak, I assume we will see spectacular efforts deployed in the next 36 hours to find the leaker. Mark Norman-scale efforts. But I’m pretty sure that we needn’t hold our breath, because the government is the source of the leak; that the amiable chap who currently sits in the office once occupied by the Attorney General of Canada will not bestir himself to question Monday’s sickening attack on due process; and that the leak will actually be roundly applauded by the ambient cloud of Liberal and Liberal-adjacent opinion, which became self-aware this weekend and decided Jody Wilson-Raybould and Jane Philpott are a virus endangering the party’s re-election chances and must therefore be stopped.

That’s right, it’s Judgment Day. As early as March 5, it was possible for Andrew Cohen to publish a column identifying Philpott and Wilson-Raybould as enemies of the (right-thinking) people. But not for the first time, Andrew was ahead of the moment, and when that column ran, he found few takers. The news that the Criminal Code had been amended in ways SNC-Lavalin found congenial as it faced a criminal trial for serious alleged misdeeds was interesting to millions of Canadians, including many Liberals. Justin Trudeau’s slow, tentative response was worrisome to lots of people who support the government, just as it was to many others. It was still possible for many minds to find room for both general support for Liberal re-election and general interest in what Wilson-Raybould and Philpott — recent Liberal rock stars, after all — had to say.

Then Maclean’s published my interview with Philpott last Thursday morning. On Thursday night’s At Issue panel, Chantal said that with Gerald Butts and Michael Wernick no longer working in government, Philpott and Wilson-Raybould were clearly looking for someone else to lose a job, and it must be Justin Trudeau. This interpretation became popular quickly (and probably would have even if Chantal hadn’t given it voice). By Saturday it was easy to find Liberals and friends of Liberals — pollsters, the odd political scientist, about half the party’s Ontario caucus — attributing the worst motives to the two former ministers. They were “infatuated with ephemeral attention,” said Frank Graves. They were committing “an attempted coup d’état,” wrote a lawyer with impressive credentials, Ishat Reza. This behaviour is, she added, “disqualifying.” This is understatement: Historical penalties for coup plotting have been harsher than exclusion from a governing caucus.

Qui veut noyer son chien l’accuse de la rage, we say in Quebec. When you want to drown your dog you say it has rabies.

This SNC-Lavalin business has been bewildering — honestly bewildering, in ways that are surely easy to understand — for many Canadians with good hearts since it began. It is an odd scandal by many standards. No money changed hands illegally, or at least not after the Qaddafis were executed. None of the assorted Liberal staffers and high officials who came at Jody Wilson-Raybould was seeking personal advancement, except insofar as many of them wanted to be on the winning side in an election and, she asserts, kept telling her so. They kept asking whether she’d seek outside advice on a decision that was the public prosecutor’s to make and the AG’s to review. When they were done asking, the prosecutor’s decision held. That would have been the end of that, if she hadn’t been shuffled. Then it became a duel of assertions and interpretations.

It’s easy to understand why all of this would seem minor and technical. An interesting theological debating point, but surely not worth more than a month of headlines and anguished commentary. So it didn’t get real, for many people, until Conservatives took the lead from Liberals in the polls — and Jane Philpott, whom Trudeau had been busy promoting in cabinet, announced that she too doesn’t like whatever she says she knows.

This puts the stakes high indeed. Everything Trudeau advocates is endangered, not by his own increasingly conspicuous limitations as a public administrator, but by the shorter route of a possible Conservative election victory this autumn. So it is all Liberal hands on deck. All of this is easy to understand.

I felt something like this was coming when I wrote, near the bottom of a column I wrote last November that was published in December, that an election is “the crudest possible instrument” for fixing serious shortcomings in public administration. It’s simply not true that if you don’t like something a government does you must replace it. But nor should re-electing the Liberals mean endorsing Justin Trudeau’s increasingly obvious flaws. The issues raised by the SNC-Lavalin controversy shouldn’t be settled by an election. Some misdeeds are worth dealing with as themselves, when they come up. And then let the election settle the election.

What is at stake in this affair is whether you can get the rules changed in mid-stream if you have the right friends or can hire them. Whether the decisions of competent professionals — beginning with an experienced prosecutor and defence lawyer, Kathleen Roussel — should be trumped by appeals to a preferred electoral outcome. This sort of system-rigging has been at the heart of, for instance, Poland’s confrontation with the European Union over judicial “reforms” that systematically benefit associates of the current regime. Reforms that are immensely popular among people who agree with the ruling party that they tilt the balance back toward fairness in a confrontation against political opponents they judge to be moral failures. Because it’s not only in Canada that you can win many arguments by saying, “Of course this helps our side, but that’s okay because our side is right.”

There’s a neat symmetry here. Jody Wilson-Raybould claimed she was approached, again and again, by people who said things had to work out a certain way because it was an election year. The emerging Liberal argument this month has been, not that this claim was untrue, but that of course it is true and should be. Wilson-Raybould and Philpott have sinned against a higher virtue so sure of itself that it cannot be troubled with the fine print. This sin is deemed disqualifying. They will soon be disqualified by their fellow Liberals, for the (synonymous) good of the party and the nation. And if you’ve sent your CV to Ottawa, have no fear. It probably won’t get leaked until it needs to be.